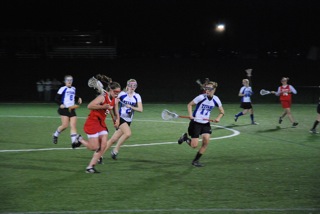 Nearly everything was conspiring to slow down Annadales normally potent, speedy attack.

First, the game was delayed due to a thunderstorm that rolled through the area. Then, game on, T.C. Williams deliberate, ball-control game plan managed to keep the Atoms off their game just enough to slip away with a 6-5 win in girls lacrosse action Tuesday night.

The importance of the win was not lost on the Titans, who are coming off of back-to-back 8-7 seasons, both of which saw them bow out in the playoffs.
We were trying to control the ball and slow it down, T.C. coach Mike Routhouska said. They are known for a speedy, quick attack so we got the ball, held on to it and spread out our offense. On defense, we didnt play too aggressive or try to take the ball away, just play tight defense and it worked.

With just three games left in the regular season, the win was key for the Titans, who are eager to strike up the young programs first playoff success.

It puts us one win closer to our goal of winning our first district playoff game, Routhouska said. Its big but were trying to stay focused on the next game.

The win provides sweet vindication for the Titans as they close out their regular season campaign over the next week.

This one meant a lot, it shows how hard weve been working and the dedication weve put in, in spite of bumps along the way, said Titan senior Linzi Burstein, who had three goals on the night.

Down 4-2 at halftime, Annandale head coach Cindy Hook told her team to put the score behind them and get back to basics.

We needed to stay with it, focus on every ball, focus on the play, dont worry about the scoreboard, she said. In the first half we were too impatient and tried to force too much stuff and in the second half we settled down.

Coming out of the break, the Titans (9-2) watched as Annandale (9-3), previously unbeaten in Patriot District play, fought back to tie the game 4-4 with 8:32 left to play on Meredith Rutherfords third goal of the game.

T.C. fended off two great chances for the Atoms to seize the lead before Burstein put the Titans ahead with 4:43 to go.

Annandale leveled the score again just 28 seconds later, but that tie, too, was short lived, as T.C. junior midfielder Anna Kopekca put the Titans ahead for good 2:30 before the final whistle, knifing across the goal from the left and putting it past Annandale goalkeeper Emma Barker and sealing the games final margin.

T.C. definitely dominated more in the first half, Hook said. They played very well as a team, they were patient in attack, patient on defense and strong in transition.

The Atoms outshot the Titans 17-12 on the game and 8-5 in a frenzied second half that saw them score three times.

In a low-scoring affair, it was the Titans ability to hold on that ultimately proved crucial.

We wanted to control the ball and try to frustrate them, and we were able to do that, Routhouska said.

It was definitely a defensive battle, very low scoring both teams were hustling, but T.C. got the last goal and ended up winning by one, Hook said.

The Titans move on to face South County whose only loss came to Annandale a week ago in a top-three Patriot District clash Thursday, before closing out the regular season with games at Hayfield and at home against Chantilly.