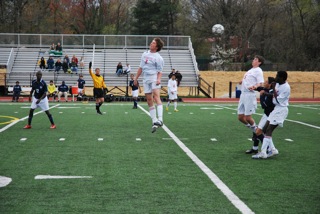 Kevin Pereira said it was his first time scoring on a free kick and if he had not said so, one wouldve left thinking he does it all the time.

Then again, at some point, David Beckham could probably have said the same thing.
With just over 10 minutes remaining, Pereira deftly curled a free kick from just beyond the center of the penalty area around the wall of Washington-Lee defenders and a diving goalkeeper to put T.C. Williams up 2-0, all but sealing the teams third straight victory.

Prior to Mondays game against Washington-Lee, the Titans (4-5-1) had already notched a 3-0 win against South County #10 in the Washington Posts rankings its first loss of the season and played sixth-ranked Wakefield to a 3-3 draw, also that teams only set back this year.

After nearly a week off for spring break, T.C. wasnt about to take the Generals (2-5-1) lightly.
Washington-Lee is a good team, theyre very well organized, Titans coach Martin Nickley said. They kept coming forward, got through a couple times, and forced us to be strong at the back.
Theyre a good quality team and that was a really good win for us, he said.

A little more than five minutes into the game, T.C. began to establish its attacking push, piecing together some incisive passes into the Washington-Lee half of the field but struggled to turn that into attempts on goal.

The Generals turned the tide on the Titans for the games first real scoring chance at 14:20 when Erwin Ribera-Baldomar streaked down the left side and sent in a dangerous low cross.
Somehow, T.C. goalkeeper Jose Flores guessed right and managed to kick save Gustavo Garcias low attempt from point-blank range.

It was one of many times that the Generals failed to capitalize on a strong attack, forcing Flores to make eight saves but coming away with no goals to show for their work.
We came out and wanted to get forward, pressure them coming out of the back and created some good opportunities, Washington-Lee coach Jimmy Carrasquillo said. We were totally in their face most of the game, but we just couldnt finish opportunities.

Working through Pereira who was tearing up and down the right flank for much of the half, the Titans provided a left wing counter of their own to tally the games first goal with 5:26 left in the first half.

Generals goalkeeper Zack Yancey attempted to punch away Trip Spurios long throw-in to the center of the box but T.C.s Teddy Opoku-Amoah gathered it at the right edge of the box and centered to Conor Boyle who managed to turn and fire through traffic to the bottom right corner for the goal.
I was in the back of the box, the ball was played in to me and I just shot it and it got through, Boyle said.

Pereira had not be on the field long returning to play after being shown a yellow card with 17:30 to play before he tacked on the Titans second goal on the free kick after the Generals Soufan Mosie received a yellow card for a rough tackle just outside the box.

That was my first chance like that, said Pereira, a junior winger. I just tried to curve it around the wall and it worked.

The games second goal sparked a furious final 10 minutes in which the Generals missed on a few scoring chances from close range.

At the end of the day, though, there was still nothing to show for their effort.
In the first half I think they had one shot on goal and it was a goal, Carrasquillo said. Thats how it happens, you take 10 shots and dont get anything. They take one and score.

Washington-Lee finished the game with 15 shots, while T.C. ended with 11 attempts (four on goal).
T.C. moves on to face West Springfield (Thursday) and Hayfield (Monday) next week.