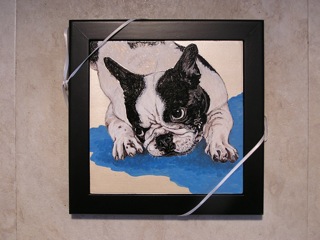 It was early May two years ago and Tina and I were on assignment, covering the annual Animal Welfare League of Alexandria adoption at Virginia Commerce Bank on Mt. Vernon Avenue. There were a few puppies, some cats, a number of rabbits and some large and small adult dogs available for adoption. There was one that really stood out, a tiny Pomeranian with no hair and missing teeth and the brightest black button eyes you have ever seen.

She had been found wandering the streets a few months before. She was terribly matted, her teeth were in terrible shape and she was estimated to be about 10 years old. After a lot of work shaving, pulling teeth and clipping toenails she was ready to meet a potential new owner.
We took one glance and it was love at first sight. We introduced her to sibling Mikey, went through the adoption process and soon she was ours. We changed her name from Morgana to Tomi, took her to our vet for a check-up and to give them a copy of the papers we had on her. We would need to monitor her heart condition and treat her arthritis. We had one goofy photo of her that was taken right after she was shaved and her teeth worked on. In that picture she has a decidedly deer in the headlights look.

We were told that her coat might never grow out but that was not the case. Within two months her hair had filled out the same length in all directions. She had a curled up tail at one end, two black button eyes and a tiny little pincushion nose at the other end. She drove me nuts! She pushed in and ate our food, bounced on us, woke us up at 3 a.m. to go pee, and was generally a nuisance. We adored her. Her feet came off the floor when she barked and she was endlessly entertaining.
Everything Tomi the Pomi did was a photo op but we never got around to taking her picture. There is one picture of her we took in the kitchen that was so dark we almost deleted it from the camera. I am so glad we didnt.

On March 10, Tomi suddenly died. Her heart just gave up and she was gone. We miss the barking and the waking us up at 3 a.m., but what we miss the most is that we never took any pictures of her and all we have is that terrible deer-in-the-headlights photo that we were given by the AWLA the one before she knew us.

How could we have been so stupid?

Please take plenty of pictures of your pet companions because you never know how long you will have them. My friend Christa Lyons hired Laura Bell to paint pictures of her two cats, Alessandro and Felix. Felix has since died and Christa says that we will cherish those paintings as long as we live.

Lisa Mulford wrote this e-mail to her friend Julie Lee, who had hired Laura to do a portrait of her cat Perot:

Dear Julie, we had to put Perot to sleep on Saturday. We are all devastated. I just want to thank you from the bottom of my heart for the drawings and photos you had made of Perot. At the time it meant so much but now that she is gone, they have become a treasure beyond compare.

A picture or a photograph will not take the place of a beloved pet companion but can be a real comfort. We wish we had a photo to place beside our little mahogany box of Tomis ashes. Take my advice: Get many pictures and ponder on commissioning a picture or a portrait for a friend. It would make a lovely gift.

Keep your tail high and your feet dry.