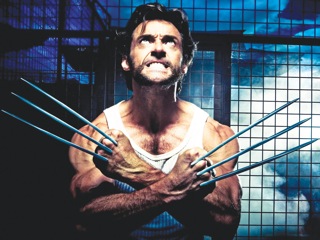 X-Men Origins: Wolverine finally answers the burning question, left hanging after all three previous Wolverine movies, of the origins of Logan, whose knuckles conceal long and wicked blades. He is about 175 years old, he apparently stopped changing when he reached Hugh Jackmans age, and neither he, nor we, find out how he developed such an interesting mutation.

His half-brother was Victor (Leiv Schreiber). Their story starts in 1840 the Northwest Territories of Canada, a neat trick, since Canada was formed in 1867, and its Northwest Territories in 1870. But you didnt come here for a history lesson. Or maybe you did, if you need to know that Logan and Victor became Americans (still before they could be Canadians) and fought side-by-side in the Civil War, World War I, World War II and Vietnam. Why they did this, I have no idea. Maybe they just enjoyed themselves.

Booted out of the Army in Vietnam, Logan/Wolverine joined a secret black ops unit under Gen. Stryker (Danny Huston), until finally, in Nigeria, he got fed up with atrocities. Nevertheless, he was recruited by Stryker for a SUPER secret plan to create a mutant of mutants, who would incorporate all available mutant powers, including those of the kid whose eyes are like laser beams. He wears sun glasses. Lotta good theyll do him.

Am I being disrespectful to this material? You bet. It is Hugh Jackmans misfortune that when they were handing around superheroes, he got Wolverine, who is, for my money, low on the charisma list. He never says anything witty, insightful or very intelligent; his utterances are limited to the vocalization of primitive forces: anger, hurt, vengeance, love, hate, determination. There isnt a speck of ambiguity. That Wolverine has been voted the No. 1 comic hero of all time must be the result of a stuffed ballot box.

At least, you hope, he has an interesting vulnerability. Im sure X-Men scholars can tell you what it is, although since he has the gift of instant healing, its hard to pinpoint. When a man can leap from an exploding truck in midair, cling to an attacking helicopter, slice the rotor blades, ride it to the ground, leap free and walk away (in that ancient cliche where theres a fiery explosion behind him but he doesnt seem to notice it), heres what I think: Why should I care about this guy? He feels no pain, and nothing can kill him, so therefore hes essentially a story device for action sequences.

Oh, the film is well-made. Gavin Hood, the director, made the great film Tsotsi (2005) and the damned good film Rendition (2007) before signing on here. Fat chance Wolverine fans will seek out those two. Why does a gifted director make a film none of his earlier admirers would much want to see? Thats how you get to be a success in Hollywood. When you make a big box-office hit for mostly fanboys, youve hit the big time. Look at Justin Lin with The Fast and the Furious.

Such films are assemblies of events. There is little dialogue, except for the snarling of threats, vows and laments, and the recitation of essential plot points. Nothing here about human nature. No personalities beyond those hauled in via typecasting. No lessons to learn. No joy to be experienced. Just mayhem, noise and pretty pictures. I have been powerfully impressed by film versions of Batman, Spider-Man, Superman, Iron Man and the Iron Giant. I wouldnt walk across the street to meet Wolverine.

But wait! you say. Doesnt the film at least provide a learning experience for Logan about his origins for Wolverine? Hollow laugh. Because we know that the modern Wolverine has a form of amnesia, it cannot be a spoiler for me to reveal that at the end of X-Men Origins: Wolverine, he forgets everything that has happened in the film. Lucky man.