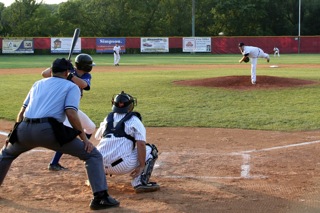 By the time the first pitch of the Alexandria Aces 2009 season crosses home plate on June 5, dozens of variables will have already fallen into place.

For starters, the Aces, in their second year as a member of the Cal Ripken Sr. Collegeiate Baseball League, will have brought more than 25 players into the fold, cementing months of recruiting and planning.

By that first pitch, the players, including three returning Aces, will have reported to practice in Alexandria from across the United States and Canada. With the guidance of head coach Eric Williams, they hope to navigate the week-long crash course to become a team.

Coach Williams has one week to get these guys together and piece them together on the field, General Manager Brian Midkiff said. He has to get guys from all over the country to come together and play as a team by June 5.

Coming off of a 16-24 inaugural campaign, Williams and the rest of the organization are eager to see what their promising roster not all that different from a preseason fantasy sports roster can accomplish this year.

Weve got a really good looking group of players coming in, but of course they always look good on paper its that way for everybody but Im excited about this team even compared to last years team, Williams said.

Now we have people who are anticipating our return, Aces President Pat Malone said. We have a really strong fan base. Weve got a good following who are looking forward to coming out to the [Four Mile Run Park] ballpark to catch our games.

Midkiff, who also serves as the teams recruiting coordinator, said the team looked for more depth on the mound and versatility on offense for the upcoming season.

I think were more talented and have more pitching depth and will probably be even better all-around than last year, Williams said of this years team.

After reporting to town this weekend, the team will practice for several hours each day leading up to the June 5 opener. Although they come from across the continent, Williams said that doesnt pose too many problems for the players.

They can come from all over but theyre still ballplayers, Williams said, adding that they all might have a different way of communicating things on the field, but they all know the game and know what to expect. The ballplayers want to be here, want to play. They know what theyre getting into before they get here.

The hardest part is probably solving the little idiosyncrasies that come up between players from different schools. Guys might come in with a chip on their shoulder or playing out of position or might be coming here injured, he said.

The players are coming off of collegiate seasons at nearly every level from junior college to NCAA Division I, where all but a handful of schools use lighter, more forgiving aluminum bats, Midkiff said. The switch to wood bats that comes with summer league baseball takes a while to get used to.
In fact, Midkiff said, a lot of the diamonds-in-the-rough are found at the junior college level, or in Division II or Division III.

[Division II and Division III] guys come into a situation where there are other guys from Division I programs and they might come to the team a little hungrier, more eager to prove themselves, he said.

Guys who can get it done in college, regardless of division, will be able to compete in summer leagues, Midkiff said. The bat may be different, but the field is still the same.

The recruiting process places a premium on positive relationships and finding prospects through targeted, calculated recruiting and plenty of research, Midkiff said.

College coaches could be getting calls from 20 different teams in 20 different leagues, he said.
Wood bats in hand, the Aces face a packed schedule with 42 games in 60 days. The Orioles (Linthicum, Md.) and the Bethesda Big Train are likely to be the powerhouses in the league once again, having finished first and second last year, Williams said.

Abramson went 2-2 this past season at the University of San Francisco, leading the team with five saves and 34 strikeouts in 47.1 innings.

Sikorski should provide some power for the Aces, having batted .370 for Johns Hopkins this season, with 45 RBI and a team-leading 13 home runs. His .782 slugging percentage was tops among players with 20 or more starts.

Solomon had the lowest ERA (1.94) of any Trinity University pitcher this past season, winning five games and holding opponents to a .196 batting average.

While there are fewer doubleheaders than last season, a trend that wore down the Aces pitching staff late in the year, Malone said that the summer league games give players an opportunity to hone their skills year-round.

The team provides Alexandria a unique chance to show what it has to offer to family, friends and the players who come to visit the city, forging relationships for the future, Malone said.