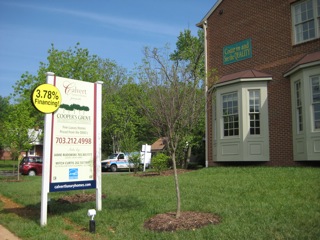 Driving down Duke Street between Old Town and Landmark Mall, one sees a sign promising financing below 4 percent for the new Coopers Grove community.

Calvert Luxury Homes is just one of the builders trying to fight the slow housing market with lower interest rates and reduced prices. Others are providing once costly options for free in their new Alexandria communities.

But Calvert realtor Mitch Curtis, at Keller Williams in Alexandria, explains that the homes are filled with standard luxuries as it is. They include stainless steel GE Profile kitchen appliances with an Energy Star certification. It is in keeping with the company motto, Luxuries are standard in a Calvert Home.

So far, one of the 13 homes has been purchased. Prices have not been lowered, like the $998,000 Colonial-style Croftwood model, with five bedrooms and 4.5 baths. But, Curtis says, With this financing, you can buy more house.

Rates below 4 percent compare well with the standard rates, which hover around 5 percent. Through an arrangement with Virginia Commerce Bank, the 3.78 percent rate is for the first five years of a 30-year fixed-rate mortgage, going to 5.88 percent for the remaining 25 years, with a minimum of 10 percent down. In addition, the buyer pays no points, origination fees or mortgage insurance.

Its a great offer, Curtis said. We have had a lot of traffic in the five weeks since we started the offer, at the beginning of April. But, of course, we want more.

At its Seminary Heights community, Prospect Development is offering the same financing, according to realtor Chris White of Long&Foster in Alexandria.

The base price is now $1,351,000 for the remaining homes, with their four bedrooms and 3.5 baths. Finished basements are now included there, too.

Another unit is 90 percent complete. The builder has also decided to complete the other two before they are sold.

It is hard for people to imagine a house before it is completed, White said. But now that it is completed, people can see it and activity has increased. About three to five people are looking at it pretty seriously.

In the Hollin Hall section of Alexandria, the Long Company of Virginia has sold six of its 22 new homes. Seven are finished and 10 more are under construction.

To attract additional purchasers, the starting price was sharply reduced this month. The house that had been $999,000 is now $787,000, and there are also lots of free options, says the realtor, Casey Margenau of RE/MAX Distinctive in McLean.

We have had tremendous activity because of that, he said. Some people who had looked before had told me that these houses were too costly. I have been calling them back to tell them about the lower prices, so now they are coming back and saying, Maybe I can get one.