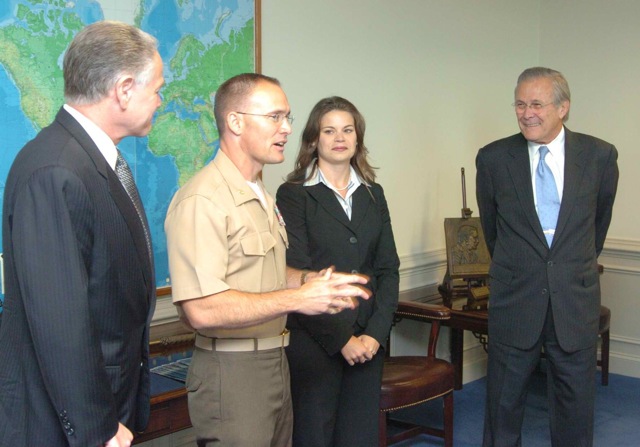 On the last Monday morning of each May, Americans hit the snooze button on the alarm clock if they heed time at all. The steaks have been marinating in the fridge all night, destined for the ash-spotted grate of the backyard grill next to a cooler of cold libations that are already trapped under two-pound bags of ice.

Its Memorial Day: A holiday from the usual, rutty Monday for some, but a day of deeper introspection for others, especially for members of the American military and the friends and family of soldiers who have died.

The holiday takes on a different meaning for each person. While most Alexandrians are cognizant of what the day represents, especially because of the citys proximity to Washington and its military culture, it is perhaps more acute to those who have been directly affected by a loss at war.

Do the majority of Americans go to a cemetery every Memorial Day and reflect on those who have given their life in defense of our nation? Probably not, said Major David Romley, an Alexandrian. I think were really lucky because Americans understand that American men and women are doing what their nation has asked them to do.

Romley, 38, has been in the Marines for 20 years and has gone on tours to both Afghanistan and Iraq. Memorial Day evokes a lot of sentiment from Romley, but so does his first name, which he received in honor of his fathers best friend David Thomas who died alongside him in the Vietnam War.

When he celebrates Memorial Day, Romleys father and brother, both Marines, are in his thoughts as are all the people he has known who have died upholding the ideals of our nation.

Fellow Alexandrian Maj. Joseph Trane McCloud, 39, was one of them. He died in 2006 in Iraq when his helicopter crash-landed. McCloud and Romley went to military school together and had been friends since 1996.

We werent the tightest of friends, he said. But we certainly were friends, and it just catches your breath you dont expect it.

For Army Captain Nolan Albarelli, who grew up in Alexandria and still lives here, Memorial Day did not hold a huge meaning until he commissioned in 2004. He never had any military family members or close friends serve abroad.

I think [serving] makes the day more tangible in terms of the sacrifice soldiers make, he said. Now that Ive actually served with guys in combat and lost people I know, it makes Memorial Day all the more special, all the more real.

Albarelli, 27, was a platoon leader in Iraq for about 15 months during the 2007 troop surge. He was a combat engineer there, where one of his jobs was to clear roads by locating improvised explosive devices, securing them and safely blowing them up. He lost a soldier and friend who he had gone through all his training with, and a friend with which he patrolled the roads as well.

Just about all of them were killed by IEDs, so its a special day because that was my job, in terms of going out there and clearing the road of the bombs, Albarelli said. To lose friends from those very bombs is an emotional toll and Memorial Day is just a good day when you can recognize those individuals and their sacrifices.

But as grim and solemn as the holidays purpose may sound, it can spawn the exact opposite. Both Romley and Albarelli described a positivity that emanates from what is traditionally a day of bereavement for military personnel.

Romley, who works at the Pentagon, participates in a tradition there in which civilians and military personnel of all ranks and size line the walls to recognize visiting wounded veterans some who will be disabled for life in a casual yet heavy ceremony.

For at least a half hour people are continuously clapping, he said. Its a really emotional event. You cant help but shed a tear when youre there.

Romley also has his wife Meredith and two newborn twin girls, Evelyn and Sylvia, who represent in part what he has fought for.

Other than his fallen friends, Albarelli thinks of the impressive contribution from the Alexandria community when he thinks of Memorial Day. About three years ago his mother began sending care packages to soldiers in Iraq from her Alexandria mailing address. It caught on in the community and her house soon became a drop-off spot for Iraq-bound goods, from boxers to toothbrushes to DVDs. She sends out about 80 boxes every other month, Albarelli said.

He remembers getting the packages with his platoon of 32 soldiers, waiting to go home, and now thinks what those packages mean to the soldiers currently on the ground.

Alexandria is where I grew up so I was really longing for the day when I could return to Alexandria and not just Hawaii, where I was stationed, he said. I would say the support the community in Alexandria has given to soldiers in Iraq is unbelievable.

Romley and Albarelli display a soldiers perspective of Memorial Day. Despite the loss and solemn reflection involved with the holidays purpose, or the various politics surrounding the wars, they are reenergized, not deflated, by the days meaning.

Its really a time for me to rededicate and recommit myself to what Ive pledged to do, Romley said. Ive pledged to serve our nation, our Constitution and the American people. That may sound a little corny, but thats what weve done.

Albarelli said he knows that not everyone agrees with the wars and There are days when it would be difficult to disagree with them, but ultimately every good soldier knows that they have a duty to their country, whether it be something they agree with or not. Its something that their country is asking of them.