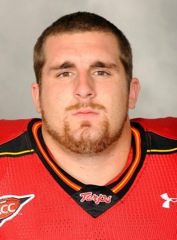 It was after midnight Monday morning and Dean Muhtadi was taking care of some homework on a flight home, something that 99 percent of the time would not be too unusual, a graduate student getting work finished any way he could just before final exams.

This time, though, the flight was originating in Green Bay, Wis. and Muhtadi had just been offered a chance to play professional football with the Packers as a defensive lineman.

Muhtadi, the former T.C. Williams and University of Maryland football player, had gone to Green Bay to participate in the teams rookie mini-camp, one of about 25 players trying to win a spot on the teams 80-man roster.

After getting the good news following the final practice on Sunday, he had all he could do to avoid making a scene.
I think it took everything I had to contain myself and not yell, I was so excited, Muhtadi said. Its the greatest feeling ever, I dont know how to describe it.

As it turned out, Muhtadi was one of just three players out of the 25 one of the other two was a Terrapin teammate, offensive lineman Dane Randolph at the camp to earn a return trip to Green Bay for the next round of training on May 17.

The recent success is all the more vindicating after the often trying, long road Muhtadi took from Alexandria to the town of Vince Lombardi and Brett Favre.

Muhtadi attended Christopher Newport University after graduating from T.C. Williams in 2004 and played football there for two years before he decided to take a risk and transfer to play at Maryland.

It was rough, it was extremely rough, he said. I remember my first year at Maryland. It was probably the most depressing, difficult, most miserable time of my life because I go from being a team captain and starter and all-star on the team at CNU to being some scout team bum who no one knows.

B.J. Ketchem, Muhtadis strength and conditioning coach, thinks its just that sort of determination and perseverance that defines the kind of person Muhtadi is, athleticism and intelligence aside.

I cant really think of any people Ive been around who have the same type of heart and desire that he has, and that includes working with people at the Olympic trials, Ketchem said. He has that special, innate ability to will himself to achieve what he wants.

After sitting out his junior year and not playing as much as he had hoped to his academic senior year, he got his chance to shine this past year, starting three games at defensive end.

I measure my experience at Maryland by my final year there. I started a handful of games but I played a lot, Muhtadi said. It was everything I transferred for, all the reasons why I left CNU.

To go to places like Clemson and have a sack in front of 80,000 people and pull out a huge upset moments like those are why you take huge risks, he said of his role in the Terrapins 20-17 win over then No. 20 Clemson.

As if that were not enough, in the buildup to the NFL draft Muhtadi acknowledged it was a bit of a stretch to get drafted he pulled a hamstring a little more than a week before he was supposed to work out for NFL scouts with his fellow Maryland seniors, limiting his ability to take part in the majority of the drills used to evaluate players.

To get back on track and healthy again, Muhtadi came home to Alexandria.

It seems like all corners of Alexandria really helped me out, he said. Beyond working with Ketchem, Muhtadi said that a local chiropractor and an acupuncturist, both donating their services, helped him out in his effort to be able to perform when the time came.

So, while his name went uncalled in New York City on draft day, it was not long after before the phone started ringing.
I didnt get a call on draft day, which was no big deal in the grand scheme of things, but I did get a call from my agent about an hour after the draft ended and he said hed gotten some phone calls from some different teams, Muhtadi said.
Eventually, Muhtadi and his agent decided to try out with Green Bay, one of a few teams that were interested in seeing what he could do, if only on a tryout basis. The rest has since panned out.

Its funny how it worked out, he said. No team was willing to sign me right away after the draft. But now that people are finding out that I signed with Green Bay, it seems that other teams have been calling trying to get in on things.

And, as if getting the chance to be an NFL player wasnt enough, Muhtadi currently half way through his MBA program at Maryland, with the football teams highest grade point average to boot also received a few calls for financial planning jobs while he was in Green Bay.

I actually got a couple of job offers while I was in Green Bay its kind of weird. It always seems like when it rains it pours for some reason, he said.

Even so, Muhtadis long road to professional football has only gotten marginally shorter. NFL teams trim their 80-man rosters to down to 53 by the end of the summer training camps.

One of those also seeking a spot on the Packers is fellow rookie defensive lineman B.J. Raji from Boston College, the ninth pick in the draft. But such competition is not likely to deter Muhtadi.

As he remembered Ketchem telling him before his Packers tryout, Hey, this is the story of your life. When has anything ever been handed to you? You know you have to go out there as the guy at the bottom of the list and work your way to the top.