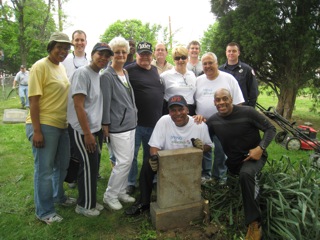 Before she died, Debbie Kidds grandmother told her she was part Scottish. After visiting Scotland twice, Kidd became intrigued enough with her past to spend the last 10 years tracking down her connection to the Old World.

She has yet to find it.

But in her search, the Fairfax native has become enamored with her personal ancestry, using her background as a professional librarian to track down the too often scant crumbs of her lineage.

It took some uncanny timing and the help of some Alexandria firefighters, but Kidd uncovered an iota of her ancestral history the gravesite of her great-great grandparents Samuel and Mary Dove during the citys recent day of volunteering at Lebanon Union Church Cemetery on the western limits of the city.

Kidd thinks she remembers visiting Doves farm along Route 236 (Duke Street or Little River Turnpike) as a small girl, but cant be sure. Still, between the vague memory and her research, she knew she was close to finding her ancestors.

Debbie, 68, and her husband Dan of the same age, had tried locating the cemetery two years ago but could not find it, I395 and Duke Street having spurred development far taller than the dilapidated, overturned wooden and stone monuments to the dead erected two centuries ago.

City volunteers were restoring the graveyard, established around 1866, when Emergency Medical Services Supervisor Lisa Jones spotted Kidd and her husband Dan taking pictures of the cemetery from behind a fence. Jones sensed they were looking for something and asked them if they were there to see a family member.

They even had a piece of paper with a diagram showing where the gravesite was supposed to be, Jones said.

Jones and other volunteers accompanied the couple to where the Doves supposedly were buried but found nothing.

They got very excited about it because the cemetery was in really bad condition, Debbie said. Many of the gravestones were overturned and you couldnt quite read them.

The crew went from gravestone to gravestone, unearthing the facedown tablets, hoping to see the names for which Debbie hunted. After a few overturned grave markers, four or five volunteers lifted up a rectangle granite headstone spotted with dirt.

Etched into it was SAMUEL DOVE 1845 1926 and MARY E., HIS WIFE 1853 1906.
When they turned that gravestone over it kind of brought tears to my eyes, Debbie said.
Everyone was so excited, Jones said, that they righted the rest of the headstones one by one, celebrating the find.

Perhaps more uncanny, though, was the eerily good timing of the Kidds visit.

The Kidds, who now live in South Carolina, had spent the previous day looking for records on Debbies great-great-great grandfather, also named Samuel Dove. They came to Alexandria a day earlier than planned after finding nothing of value in Charlottesville.

It was like fate, Debbie said. It was just like we were meant to find that grave site this time. Because if those men and women had not been there there was no way that we two fragile senior citizens could lift up that gravestone.

City Manager James Hartmann, who was also volunteering at the cemetery, said, All the troops working in the cemetery had done a nice job of cleaning things up and putting it back to a dignified state. But this instant was special and serendipitous.

While Debbie has yet to find any solid proof of her Scottish beginnings, she was able to capture a piece of her history. For the volunteers, her gain was an unexpected psychological boost. Jones, who is paid to help Alexandrians as a public safety officer, (and often volunteers for Meals on Wheels) said the unique experience offered her a different kind of payback.

When Im at work and doing the paramedic supervisor thing, its reactionary somebody calls they need you, Jones said. But you dont have to help people only when they call 911.