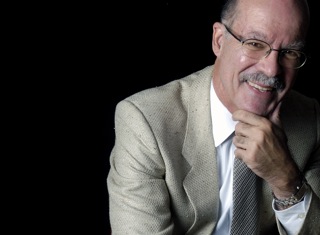 John Arnold had a unique beginning to life. Coming into the world a few weeks earlier than expected, he was born on a ship on the high seas as his American parents sailed from Cuba to France. His father worked for the U.S. government overseas, so his formative years were spent in the picturesque Alpine resort of Garmisch-Partenkirchen, Germany, until he graduated from high school at the age of 16.

“It was a great place to grow up, and I loved to ski as much as I could,” said Arnold, now one of the best-known names in the world of television and advertising. “I actually was offered skiing scholarships to the University of Colorado and the University of Utah but an accident during my last year of high school put an end to that.”

“I changed to Loyola because I loved Jacques Cousteau and National Geographic films,” Arnold said. “Initially my idea was to marry filmmaking and geography but I discovered that I could do much more with the medium.”

After a two-year stint producing commercials back in Hawaii, Arnold returned to the mainland, when he moved to the San Francisco Bay area to be closer to Los Angeles and the TV and movie scene. It was there that he founded Arnold and Associates, a creative TV commercial and programming company that produced ads for companies throughout the U.S., Asia and Europe.

At its largest, Arnold and Associates had five locations around the country but then scaled back to just California and the Washington area. His client list includes Daimler-Benz, the U.S. Postal Service, Advanced Micro Devices (AMD), United Airlines, Nescafe, Raytheon, Gallo Wines, McDonalds, Kentucky Fried Chicken, Budweiser and Prestos SaladShooter.

Over the years, Arnolds company has won every significant national advertising and communications award, including the New York Festival Gold, the Telly, CLIO, ADDY, EFFIE, the Public Relations Society of America Anvil Award and scores of others.

“One day, we were sitting around our San Francisco offices during the early years of MTV,” Arnold recalled, “And someone said, ‘Hey, why don’t we do a rock video with a real rock star the Pet Rock?’ Well, that got the ball rolling. We acquired the rights to the Pet Rock and produced something just for fun. Then we got it on MTV and wound up selling thousands of VHS copies. It still pops up here and there as a nostalgia piece.”

Arnold’s current company is Arnold Entertainment Partners, formed in 2005 to focus on the production of feature films. While the greater Washington area is home to a vast community of documentary film producers, AEP focuses on narrative films, specifically comedies and dramas. Samuel Goldwyn of MGM used to say The color of corn is gold, Arnold said. And I adhere to the idea that family fare G, PG, and PG-13 films are profitable fare.

AEP is currently working on films that are budgeted to be produced off the lot and not through a studio.

“We will use the major studios for distribution, but will deliver films in the $8 – 10 million range,” Arnold explained. “This isn’t unique. The business model is well established with movies like ‘Million Dollar Baby’ and ‘Crash,’ both Academy Award winners. Yet, theres a drive to produce either films for over $100 million or those direct-to-DVD films under $2 million. The $100 million pictures Ironman and Dark Knight being good examples are aimed at the youth market and a summer release. Its a big gamble with big rewards if you get a hit.”

Arnold believes that it is critical to have a pragmatic vision for your business side, and a lively, engaged imagination for your creative side. If you have that combination, its amazing the caliber of talent both the stars in front of the camera and the technical artists behind it that will want to work on your projects.

While Arnold still maintains a residence in San Francisco, he prefers to spend most of his time in Alexandria when he is not working on location. He originally moved to the area with the idea of making political advertisements but found that there just wasn’t a huge interest in outsiders assisting in re-tooling the messages. He decided to stay anyway.

“Arnold Entertainment Partners is bi-coastal and I live here in Alexandria,” Arnold said. “It’s a wonderful community and a vibrant place to develop scripts away from the hustle of Hollywood. We have to do a bit of travel but its always great to come home and gaze out at the Potomac from my living room.”

When asked what he would like to do when he retires from making movies and ads, Arnold replied, “Why would I ever retire? I am so happy doing what I am doing. I can’t ever imagine wanting to stop.”