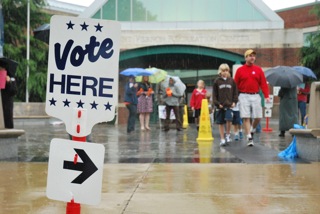 Each time Alexandria has to roll out the machinery of democracy, be it for a presidential election, a political primary, a full-slate municipal ballot or a special election for a single seat, the citys coffers take a similar hit, regardless of the turnout.

Between hiring election officials, organizing absentee ballots, buying voting equipment and paying for other administrative costs such as printing, an election in Alexandria usually costs at least $50,000 to $60,000, according to Election Administrator Eric Spicer.

Lately, weve had extra elections, which is out of our control, but if there was only one election obviously wed spend less, Spicer said, adding that the office of voter registration and elections basic budget accounts for two elections in a given year.

Special elections, like the one for the School Board last summer or City Council the year before, and political primaries add to the overall cost of election administration.

If we dont have that June primary, we dont spend the money, Spicer said, adding that in the most recent local election cycle, the political parties opted for caucuses rather than primaries because the costs were far lower for the city and the parties themselves.

With each of the 26 polling places and the absentee center requiring one chief election official ($200 for the day), two assistants ($125 each) and about five other election officials ($100 each), the cost of staffing requirements in any given election exceed $20,000, the single biggest cost associated with an election, Spicer said.

In the May 5 local election, with the City Council, School Board and mayors seat up for grabs, 14,419 Alexandrians, about 15 percent of registered voters, helped decide the election, according to the election results.

Taken at the rough estimate of election expenses per voter, each vote cost about $4.
While those turnout numbers are smaller than the citys last full local election in 2006, they also pale in comparison to the size of general elections every fourth November, when presidential elections usually attract a turnout rate of around 70 to 75 percent.

Voters in local elections tend to be hardcore voters who have their registrations up to date they are much better prepared to vote, Parkins said, adding that high-participation national elections add different levels of complexity not seen in local elections.

There is so much more emphasis on the logistics and crowd control in a presidential election, its a different sort of animal, he said. We had about 70,000 people who voted in November and only about 14,000 who voted in this last election. Its a completely different set of challenges.

In the city of Hampton, with only a slightly larger population than Alexandria, the most recent local election in May 2008 saw a turnout rate of 20.5 percent, according to election results, and the November election had a little less than 75 percent of registered voters heading to the polls.
Yet, low turnout also begins to beg questions about getting more citizens out to vote and the efficiency of little-used polling places.

The simplest solutions to cut back on the number of precincts or consolidate the May and November elections do not provide such absolute savings, according to Parkins.

For instance, Spicer said, the citys ability to consolidate polling places in an effort to cut costs is limited by regulations that cap a precinct at around 5,000 registered voters,
In two recent cases, high populations of registered voters have led to the splitting of precincts at Cameron Station and Northern Virginia Community College, Parkins said.

Those West End locations with high-density housing that are often rentals attract the fewest voters. Only 3.6 percent of registered voters turned out at the NoVa polling place for the city election May 5.

They vote in high rates in the presidential election, Parkins said of West End voters, who might not engage as much with local politics as areas with more single-family dwellings where people often get more interested in local politics and municipal services in part because they directly pay local taxes.

Its sort of an ordinary, urban phenomenon, Parkins said. I think youd find that same set of comparative voter participation in just about any community in the country.

As part of an effort to modernize and streamline the voting process, the city began using electronic pollbooks, laptops with voter registration lists that over time will recoup the funds that had been spent on printing the pollbooks and shipping them back and forth to Richmond. It has already cut down on time spent at the polls, Spicer said.

The decision to combine the May elections a tradition for most Virginia cities until state legislation in 1997 allowed for that to change with the November Election Day is up to the City Council, Spicer said.

The elimination of the May election would, on the surface, save the city about $60,000 but some of those savings would have to be reinvested in the larger, more complex November election, Parkins said. One less election every three years would be marginally more efficient.

Alexandria, because of our short ballots, tends to have large precincts and we can move a lot of voters through a precinct on an election day, he said. If we had longer ballots from combining elections, there would be the expense of buying more machinery or splitting precincts.

The issue of combining the citys two primary election dates has come before the City Council before and is on the docket for this Saturdays public hearing, Councilman Justin Wilson said.

Republican Councilman-elect Frank Fannon thinks the current system of different May and November elections should remain in place.

Its really important that you keep the elections separate, the reason being that in the May election the people who are really interested in the city government will come out and vote, Fannon said.

Wilson, a Democrat who came up 310 votes short of reelection on May 5, sees things differently.
Having our City Council, who is spending half a billion dollars, chosen by that small a percentage of the electorate is an affront to democracy, Wilson said.

Frankly, the most effective way of improving turnout is moving elections to November, he said, adding that about half of the cities in the state have opted to do this since 1997.

When you have such a small turnout in these local elections, you can magnify the voices of a few special interests, Wilson said. To the extent that you can expand the number of people participating, you can get a better proxy of the overall electorate.