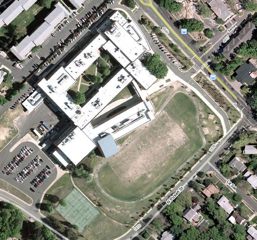 For at least another year, and maybe for as long as six years, there are no wholesale improvements in sight for the long-suffering field and track at Francis C. Hammond Middle School.

One of many budget-line victims of the current and projected fiscal landscape, the Hammond field project has been cut from the Alexandria City Public Schools capital improvement plans after the City Council trimmed construction funds for the school system. At the same time, the Council approved funding for a new artificial turf field at a yet-to-be-determined city park.

The city government provided more than $12 million for school construction projects in the fiscal year starting July 1, but that was $9 million less than the school system requested. The Council placed a premium on maintenance and energy efficiency projects, excluding the School Boards proposed $1.7 million in improvements for the Hammond athletic fields and track.

Over the next six years, the Council has approved $64.8 million in school construction spending, $21.8 million short of the School Boards original request, according to ACPS budget documents.
Gary Carr, a dedicated advocate for improving the track facility at Hammond, speaks regularly at City Council and School Board meetings about the need for a full-fledged Hammond track.

Well-known for his closing line, If you build it, they will run, Carr said hes a realist in terms of the budget situation that were in but has numerous questions about the decisions and priorities set for improvements at city and school athletic facilities.

The glaring absence, Carr said, is the lack of a regulation track at either of the citys two middle schools, Hammond and George Washington. He said that conspicuous absence is detrimental to the community and to the education and athletic development of the citys youth as they transition to high school.

Because of the condition of the field, Hammond, the larger of the citys two public middle schools with more than 1,200 students, has difficulty conducting physical education classes with any regularity.

The problem is that the kids cant go outside the day after a rainfall because its all mud, said Mark Krause, ACPS director of educational facilities. Because of a lack of grass, even on a beautiful day, physical education classes couldnt use the whole field.

The Hammond track, which Carr has lobbied for at length over the last 10 years, no longer resembles a normal track, having been narrowed and its path distorted from the standard oval shape when the school underwent an expansion that ended in 2002.

Since the schools expansion, the field around which the track traces its untraditional path has fallen into disrepair due to over-use and maintenance issues, Krause said.

Without a full complement of healthy grass or proper drainage, school officials have noted how the field becomes a mud pit after any significant rainfall, essentially rendering it useless until the surface dries out.

With the funds limited by the citys financial circumstances, fixing the field at Hammond appears to have gone by the wayside in favor of bringing some schools into compliance with Americans with Disabilities Act regulations and solving urgent school-capacity issues, Krause said.

City officials said $900,000 may be spent on a new artificial field with lighting at Ben Brenman Park or at another park, part of the citys goal of maximizing field usage and minimizing maintenance costs.

City officials stressed that public hearings would be held about any new field with lighting before a site is selected.

The funding for a new artificial turf field evolved after the City Council added an extra penny per $100 of evaluation to the real estate tax rate, City Manager Jim Hartmann said. An estimated $1.4 million in improvements to the James K. Polk Elementary School gymnasium, something the School Board had pressed for in the current budget cycle, was also included in the funding approved by the City Council.

Hartmann stressed the complexity involved in this years budget and said that because of the city and school systems numerous capital project needs in years to come, the city will be working in the next budget cycle to compile a comprehensive inventory of the existing infrastructure needs.

Anything after the 2010 fiscal year will be up for review, Hartmann said. Weve got more on our lists than were going to be able to afford.

There is a very conscious goal over the next year to get our hands around our capital budgets and our capital needs, and the schools are a pretty big part of that because of the capacity challenges that they have, Krupicka said.

Krupicka said increased usage of a new field at Brenman could boost spending at nearby businesses in the Cameron Station area. But he said the needs at Hammond have not gone unnoticed.

The track is certainly something thats on everyones mind, and I think were following the schools lead and the athletic directors lead when it comes to prioritizing that and where to put the resources, Krupicka said.

I think we all agree theres a need and its just about how you balance it with other youth sports needs that we have, he said.

In the meantime, Hammond will have to wait for the funds to become available and align with ACPS priorities.

Obviously, from [the schools] point of view, wed have preferred that the city opt to fund a new artificial turf field at the school instead of at a city park, Krause said. It wouldve benefited the school kids on a daily basis and then benefited the city on an after-hours basis.