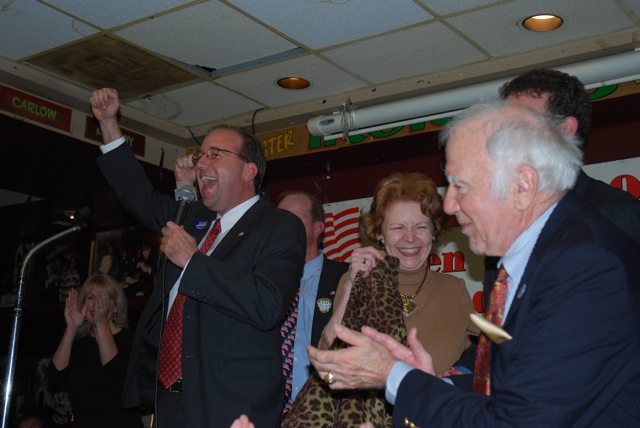 Six years of Democratic hegemony ended Tuesday night when Republican Frank Fannon and GOP-backed Alicia Hughes (I) won two seats on City Council in an election that was as unpredictable as the sporadically falling rain around the citys precincts.

Democrat Kerry Donley, the former mayor and leading vote getter, rounded out the group of seven.

Fannon received the third-most votes behind Donley and Councilman Rob Krupicka (D) after focusing his campaign around his fifth-generation heritage in the city and his business experience as a realtor and owner of a bank branch. He emphasized his business expertise as crucial in helping Alexandria fight its way through the recession as unscathed as possible.

The councilman-elect said he will address diversifying the tax base right off the bat when he takes his seat at City Hall in July. He wants to lower the citys dependency on residential real estate tax revenues by increasing the citys commercial development in Arlandria and around Landmark Mall, which has stalled for years because of a dispute over land rights with the malls owner, General Growth Properties.

Were having a downturn in the economy right now and its important that were going to continue to grow the tax base, he said. Raising the real estate tax that we did last week is tough for a lot of citizens right now, during a recession.

Fannons goal is in line with the majority of the Council, including Donley, who expressed eagerness during his campaign to take the tax burden off the citys residents and balance it with that of city businesses.

Hughes, who championed West End issues throughout her campaign, beat out Lovain by 175 votes, according to the unofficial results. She has a legal background in land use related to industrial development.

Hughes lives in the West End and carried the Cameron Station precinct one of four won by the two-and-a-half-year resident. Prior to the election, election observers viewed her as an underdog.

There were a couple of things going for [Hughes] other than just her message, said Chris Marston, Chair of the Republican City Committee. She put together coalitions no one else could: Shes African American, which I think helped some, and shes the only woman on the ballot who isnt a 24-year incumbent.

Like Fannon, Hughes has said spending reform is necessary to sustain the citys coffers and quality of living in a bad economy, as well as increased partnerships between the city government and private companies.

Democratic Mayor Bill Euille was unopposed for a third three-year term. Democratic Council incumbents Paul Smedberg and Del Pepper also won re-election. All the Democrats offered congratulations to the two Council newcomers at the Democratic victory celebration after championing the democratic values on which the city has predicated its policies the last six years.
Its not a Democratic or Republican issue but what is right for the city, Euille said.

Krupicka said he looks forward to working with Fannon and Hughes who we will certainly have disagreements with, but will be a part of a single entity come July 1.

Only 15.3 percent of the citys eligible voters showed up at the polls amid gray skies and rain. Candidates greeted voters at the polls and pushed campaign literature into the hands of voters in an attempt to gain a last-minute edge.

The relevance of party affiliation was much discussed throughout the campaign since Democrats have had total control of City Hall since 2003. They sought to continue that one-party domination in the face of spirited opposition by Republican and independent candidates. But some voters interviewed outside polling places said they did not always pay much attention to party labels.

I dont play the party game, said West End resident Steve Dawson, who grew up in the city and attended its public schools. I want diversity of opinion. Im not Republican, but its good to have at least one screaming and yelling from the corner.

For some, one party running the council was not synonymous with one viewpoint.

I think theres enough of a variety and a span of how they look at things as long as theres enough input from the community to let them know what they want, said a voter at Mt. Vernon Community School who declined to be identified.

Most voters agreed that diversity on City Council was necessary whether it was contained within party lines or outside of them. The varying philosophies and values inherent to Democrats and Republicans was an issue for voters, though, especially when it related to fiscal responsibility.

Im concerned with financial management in the city, said Michael Hobbs, who favored adding Republicans to the City Council. Were in difficult circumstances this year with the budget, and its going to be worse next year and who knows how it will go beyond that.

Old Town resident and independent Alice Reid said, I feel that Council does need to be conscious of tight economic times and I was a little disturbed that they all seemed to speak with one voice on the budget issues. I do think that having a Republican or two on the Council would be a good idea.

For West End resident Denise Hodge, who followed the election closely, such issues as the Landmark Mall redevelopment, transportation and youth concerns are nonpartisan. But Republican and Democratic affiliation can still make a difference to her.
I follow the candidates, but when its close, I vote along party lines, said Hodge, who declined to divulge her party preference.

Making his rounds at precincts throughout the day, Euille emphasized diversity as a critical element to the governing seven on the Council. Council, for the last nine years, has been representative of diversity. Nothing was ever decided along party lines its really not an issue, he said outside the polling place at Beth El Hebrew Congregation.

When the Republican City Committee came up with Plunky the Elephant, a cartoon advocating selective voting earlier in the campaign season, some Democrats worried that the strategy, which entails voting for just the three Republican-backed candidates out of the six available slots, would hurt their chances at maintaining an all-Democratic hold on City Council.

Voting returns indicate they did.

Of the 86,280 possible votes, only 65,787 votes were cast in the City Council election (including write-ins), leaving more than 20,000 votes unaccounted for.

I think the plunking strategy was pretty effective, Marston said. But it wouldnt have worked without the candidates we had on the slate.

According to the results, the average voter cast ballots for four or five candidates instead of the maximum six, leading Marston to believe the GOPs idea of attaching the plunking strategy to a cartoon elephant was successful.

We worked real hard communicating the message directly to the Republican base, Marston said. When we targeted our supporters, every message just included the plunk idea. Its not an obvious concept, so we jazzed it up with Plunky as much as possible.

Austin Danforth contributed to this report.