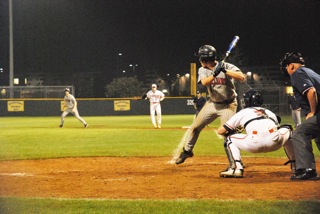 In spite of last Fridays messy, lopsided 15-0 five-inning loss to West Springfield in the Patriot District semifinals at Lake Braddock, T.C. has a shot at redemption this Friday in the opening round of the Northern Region tournament.

The Titans whose abundant pitching and fielding gaffes Friday night practically handed the Spartans the game before the second inning afforded themselves a playoff rarity after beating West Potomac on May 13, a second life.

Going up against an always tough West Springfield (16-0) ball club, the Titans gave up nine runs on just two hits in the first inning, walking six batters and hitting three, essentially throwing themselves into a hole from which they would not escape.

Starting pitcher Matt Kilby lasted just one-third of the inning, allowing five earned runs, and eight in all, forcing head coach Andrew Simpson to send in Rob Mannel far sooner than expected to finish the inning. The inning was an aberration, to say the least.

Kilby had a great outing last time and we had Rob [Mannel] ready to go, it was just a situation where they didnt have it, Simpson said. Ill go to bat with Kilby and Mannel any game, they just didnt have it this time.

It was a team effort to fall behind 9-0 like that, it cant be pinned on one call or player, Simpson added.

West Springfield head coach John James said he never expected T.C. (11-10) to get off to that sort of a start.

You never expect to win that way in tournament play, but we were able to take advantage of a few things in the first inning they gave us a lot, he said. Well take it and move on.

Eager to put in a worthy playoff performance, the young Titans squad only fielding one senior starter struggled to find their way Friday.

West Springfield is an outstanding team and unless you bring your A-game, this is going to happen, Simpson said. We didnt bring our B- or C-game.

Aaron Self led the way for West Springfield at the top of the order, crossing the plate three times. Bryn Renner went 2-for-3, with a double, scoring twice, and Andy Stalling also scored twice for the Spartans. Senior pitcher Mike Kent picked up the win with three strikeouts in two innings of work.

With the win, the Spartans moved on to the Patriot District final Monday night against South County, who reached the title game by way of a 3-2 victory over Lake Braddock.

The Titans have a week until their date in the Northern Region playoffs against the top seed from the National District, but Simpson said he and his team will be wasting no time getting back to work.

Ill be running sprints with the guys tomorrow morning, Simpson said. Its my job to have the team ready to play and we obviously werent tonight. I promise you we will be ready for the National District championship next Friday.

Im still proud of this team and what weve accomplished this year, Simpson said, referring to the teams youth. When you lose 15-0 you have a lot to work on, but were definitely not as bad as we looked today.