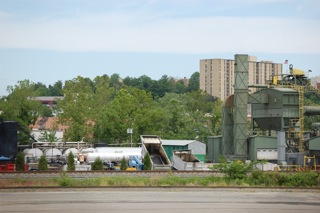 The West End is at the center of a dispute between sometimes noisy and potentially dangerous industrial operations and the residents who live nearby. Both parties have the right to their respective land, so stuck in the middle is the city, which has to decide whether its worth it economically and environmentally to move the industries elsewhere.

In June 2008, residents general unhappiness with the proximity of industrial operations to their West End homes led the city to conduct a study of the area aimed at analyzing the costs, risks and benefits associated with redeveloping the four industrial sites occupied by the Virginia Paving Co., Norfolk Southern Corp., Vulcan Materials and Covanta, a company that turns waste into energy.

The study is slated for completion in late June and the fate of both the companies and residents could be affected by it. Community meetings with members from all parties (except Norfolk Southern, which has refused to participate) have been taking place periodically, but as the studys first draft approaches, so too do cases for why the industrial companies should stay put or pack up and move elsewhere.

It seems like the economic benefit for redeveloping that area would be a better bang for the buck, said Ingrid Sanden, president of the Cameron Station Civic Association. We dont want these businesses shut down thats not the goal. A little better location would improve the land use and value though.

Residents complaints about the sites range from noise pollution to air pollution to the possibility of an ethanol fire in the case of Norfolk Southerns ethanol transfer station. Many are hoping that the citys study will produce a feasible option to relocate the businesses to Springfield in exchange for new commercial and residential development.

Representatives of the industrial companies, like Virginia Paving spokesman John Irvine, are trying to prove their worth. Virginia Paving commissioned a study by George Mason University regional economist Stephen Fuller to do so.

We hope that it sheds some very bright light on the fact that Virginia Paving is a viable, profitable business that is contributing significantly to the economy of Alexandria, especially in this challenging economy, Irvine said. Its an asset.

According to Fuller, Virginia Paving is a good neighbor and an important source of economic impact that contributes to the underlying resilience and continuing economic growth of the City of Alexandria.

Virginia Paving contributes about $741,000 in revenue to the city, according to the study. But the estimate comes partly from indirect sources like transactions and contracts with local vendors and sales tax accrued from spending money at city businesses, such as restaurants. Salaries of employees living in the city were also taken into account, enhancing the figure beyond that of just the commercial real estate taxes and other fees Virginia Paving pays the city government.

According to a preliminary presentation from the city and BAE consultants, Virginia Paving and FCC Environmental, an oil recycling facility on its property, contribute $524,000 to the citys coffers each year.

But Irving said, It got to the point when we were doing some number crunching, we realized we werent accounting for money that went to Richmond and came back to the city, as well as the taxes we pay when we buy from Jerrys Subs and Pizza or McDonalds or other local establishments.

Virginia Paving is also a source of non-residential tax revenue, money coveted by the city as it looks to diversify its tax base and take the burden off of the citys homeowners. But residents argue Virginia Paving and other industrial operations are a burden on them and redeveloping the areas would be a better long-term investment, an issue the study may resolve in June. Either way, the BAE representatives said at a recent community meeting that if any of the companies are forced to move, it could be 15 or 20 years.

Fullers study points out less visible assets to the city, like the $4 million the company spent on environmental safeguards to receive a special use permit from the city. Irvine was quick to note that the EPA certified that the company meets national standards and is a minor contributor to pollution in the area. Furthermore, it has existed at its current location since 1960, making it a longer resident than those at the nearby Cameron Station development built in the 1990s.

The city is expected to act on the study next month.