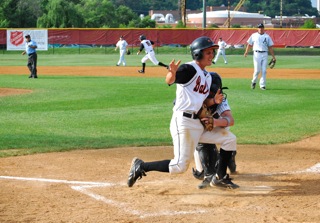 Having held their opponents scoreless through seven innings, it wasnt exactly grand larceny when Aces left fielder Brad Johnson took a pitch from the Orioles Kyle Brady deep into the gap in right field to plate the games winning run.

But boy was it close.

Whatever you call it, it was yet another one-run home win for the Alexandria Aces in their final at bat as they beat Youses Orioles 1-0 last Saturday in the opening game of a doubleheader at Frank Mann Field.

Johnsons hit was only the Aces third of the game against Brady, who had been otherwise unhittable, but it was the second in the games final inning and scored catcher Will Davis owner of the innings first hit, a double from second base.

Striking out twice against Brady earlier in the game, Johnson made a simple but crucial change for his last trip to the plate.

Brady threw a gem today for them, Johnson said. I think he had 11 strikeouts in seven innings for them, and I had two of them so I had to make an adjustment. I knew he was going to come with a fastball and I choked up on the bat a little bit.

Fortunately I just connected and it dropped.

For six innings, Brady overpowered the Aces hitters, notching 10 of those 11 strikeouts against 19 batters striking out the side in the third inning and holding the Aces to just one hit in the fourth inning.

I would much rather been ahead by five or six runs going into the seventh, as opposed to it being 0-0, Aces head coach Eric Williams said. But Bradys not their number one pitcher for nothing.

Brady, who pitches for Clemson University, went to nearby Gaithersburg High School in Maryland, where he was the state player of the year as a senior and Washington Post Player of the Year and First Team All-Met as a junior.

Hes always around the plate with some good sauce, so its just a matter of waiting him out wait for him to make a mistake or two, and we had a couple guys who caught him, Williams said.

Orioles head coach Tim Norris could find no fault with his ace for throwing a near-complete game three-hitter.

Brady pitched a great game for us, but unfortunately we didnt score any runs to help him out, Norris said. You cant pitch a better game than that.

The Orioles string of zeros on the scoreboard came courtesy of Aces starter Jonathan Abramson, who allowed six hits in six innings, and reliever Max Knowles, who picked up the victory for his scoreless seventh inning.

Abramson was up and down, but solid overall for the Aces. (4-5 through Tuesday).
Leaning heavily on his cut-fastball for most of the game, he managed to get himself out of a sticky bases-loaded, one-out jam in the third inning against the heart of the Orioles lineup. Abramson followed that tough inning by retiring the side in the fourth, only to have his defense come to the rescue in the fifth inning.

With the Orioles Tyler Hibbs on second after a double, Ty Main drove an Abramson pitch to right field for the Orioles third straight base hit hit hard enough that it looked like Hibbs would score the games first run.

Aces right fielder Tommy Grandieri had a somewhat different idea, fielding the ball cleanly on the bounce, firing it to home plate and beating Hibbs as Davis applied a perfect tag.
Like Davis game-winning base hit, his play at the plate was robbery at its finest.

When you can stop a team like this from scoring its first run, its definitely, definitely a turning point, Williams said, referring to the Orioles roster that features more than two dozen Major League draft picks.

Abramson finished the game with six strikeouts while Davis, Johnson and Grandieri led the Aces at the plate, each going 1-3.

The Orioles took the second game of Saturdays doubleheader which the teams followed up by splitting another twinbill the next day. The Aces play its next home game is this Friday, the first game of a four-game home stand at Frank Mann Field.