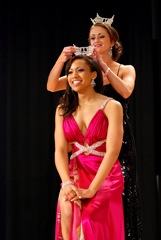 Only a few days before her first and last shot at winning the top pageant crown in the state, Miss Alexandria Erika Thomass biggest worry is forgetting something.

No, not her talent shes confident in her singing ability after weeks of practice. Not current events she absorbs as much news as she can when she has the time for it.

Rather, with less than a week to go before the citys first Miss Alexandria competes for a place in the Miss America pageant against 28 other young women from around the state, shes worried about packing.

However, after months of commuting from her home in Winchester to Alexandria in order to fulfill her Miss Alexandria duties on top of her day job Thomas, 23, is pretty well versed at that, too. Its just another thing to double check on the to-do list for Roanoke.

As if there was not enough on her plate already, Thomas took some time last Tuesday to talk about her experience over the last 15 weeks, stretching from her coronation as Miss Alexandria in March to the state pageant taking plaJce this week.

Alexandria Times: How are you feeling heading into next weeks Miss Virginia pageant nervous, excited, anxious?

Erika Thomas: I think its a combination of all three, but Im definitely excited. I think I had nerves a couple of weeks ago but right now theres just so much preparation involved that its really just excitement. I think Im more nervous about packing, because its already Tuesday I leave on Sunday and I have a lot of wardrobe items to bring. So right now Im more worried about leaving something behind than the actual competition.
Whats the competition schedule like?

The schedule is packed. I arrive on Sunday afternoon and right from there we start in with it We have dance rehearsals, modeling pageant rehearsals, and then interviews will becoming up on Wednesday. And the rest of the competition begins on Thursday and ends on Saturday.

So its basically going to take a week of your time and that week isnt necessarily a vacation?

Going into the state competition, what are your hopes and expectations for yourself?

Well, my hopes and expectations are of course to take home the Miss Virginia crown, but if nothing else, as the first representative of Alexandria, its to really make a mark and represent the Alexandria community well, however that comes to be. I definitely want to win, but overall I want to make the community proud and my family proud.

When did you decide to get into doing pageants, compete for Miss Alexandria? What sort of history do you have with pageants?

I started pageantry when I was 8 and did my first scholarship pageant, so I got into it when I was young. And then, in high school and college, I didnt compete again until I was 21. Miss Alexandria is actually the first crown that Ive won as part of the Miss America system. When I heard about the Miss Alexandria contest I was extremely interested because I had been to Alexandria several times for other reasons and I really loved the community, so I made a point to compete and was fortunate enough to take home the crown in March.

And, at 23, this is your last chance to win Miss Virginia?

Yes, its my first and last chance, so simultaneously its the beginning and the end. Its the first time Ive had the opportunity to be a local titleholder and its also going to be my last time. Ive definitely been appreciative of the opportunity, its not been lost on me at all.

You switched your talent, too, right?

Thats right. Ive been dancing and this will be my first time singing in front of a mass audience but I feel good about it.

What made you want to make the switch?

Ive of course danced my whole life, Ive been taking ballet lessons since I was 4 and did different things in high school and college. But when I would think about Miss America when I was younger, if I was going to compete, I always pictured myself singing and so I figured, being my first and my last chance, Id go with my dream from when I was younger and try singing.

Ive been taking voice lessons and working on singing non-stop, so I feel really good about it right now.

Going into the Miss Virginia Competition, what would you say your strengths are?

Thats a good one. I think one of my personal strengths is my ability to communicate. Ive always felt good about the interview, because I think thats the best time for the judges to get to know you. If you think about the competition, some girls spend weeks, months and even years preparing and then youre only on stage for about 90 seconds at a time. When you add it all up its less than 10 minutes on stage, so it makes the interview very important.

What have you been doing in preparation for the contest? How much time out of a day or a week do you spend preparing?

Ive been preparing since the morning after the Miss Alexandria pageant, so from March 8 until now Ive been going non-stop. The Alexandria pageant was the last local competition, so Ive actually had less time to prepare than the other 28 contestants.

Out of a day I work a full-time job from 8 a.m. to 5 p.m. Typically, from work, I go right to the gym until about 7:30 p.m. and then after that I have a voice lesson for about 45 minutes each night. When I finally get home, I try to read the news to stay current. So Id say outside of my job, its pretty much all Miss Alexandria and Miss Virginia.

As Miss Alexandria, what have you enjoyed the most and what may have been tough for you?

The community interaction and feedback has been great I think just being able to do something, however small, and get to have a conversation with someone and get to know someone, thats really been the best part. Ive always been the same person I was before I won the crown, but I think its helped garner attention for some important issues like truancy prevention, which has been my platform for Miss Virginia.

Some of the challenges? Definitely the commute I can leave home at 5 p.m. and not get to Alexandria until 6:30 or 6:45. Then Ill do whatever I have to do, then drive back pretty late or I spend the night and come back early in the morning for work. So its really like having a second full-time job.

What have you learned about yourself since you became Miss Alexandria?

Ive learned that I have the ability to be very organized or very disorganized and its up to me to make the decision how its going to be. Every morning I have to get out of bed and set out what I want to do each day, because theres always something to get done.