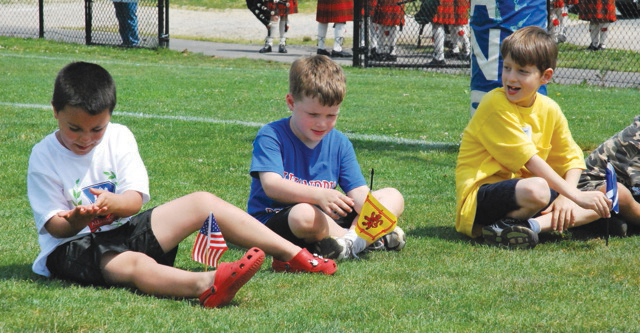 A little less than one year after their first go-round, the finest rugby players from Dundee, Scotland still managed to best their Alexandria rivals. But this time, it was a much more competitive affair as the Scots downed the Alexandrians 21-7.

Last Saturdays game the second installment of the Mayors Cup, a transatlantic rugby match between sister-cities Alexandria and Dundee saw marked improvement from an American side coming off of a 76-0 defeat on foreign soil last August.

From the outset it was clear that Dundee was facing a different Alexandria side under much different conditions, primarily the home-field advantage and sunshine as opposed to the wet, sloppy field from the year before.

It was a really physical game, said Dundee center Graeme Kiddie. The American boys didnt take a backward step, they went forward all the time theyre getting better.
The Americans improved showing was evidenced on the scoreboard as well, holding the Scots scoreless for the first 18 minutes of the opening half.

After Alexandria lost control of a lineout deep in the Dundee half of the field, the Scots gained possession and set off racing down the right side of the field.

An Alexandria winger fielded the Scots attempt to kick the ball forward but then coughed it right back up into the hands of the on-rushing Dundee squad, which Ryan Milne took the rest of the way, scoring the games first try. Kiddie failed on the conversion attempt into a strong crosswind but the damage was already done as Dundee led 5-0.

It was the first opportunity that the Scots pounced on, a theme that really proved to be the difference in a closely contested and often heated match.

We got a few chances and just took them, Kiddie said. I dont think there was a lot between the two sides, but I think we took a few chances where Alexandria didnt.

Kiddie converted on two penalty kick opportunities before the end of the half, notching the score at 11-0. Less than 12 minutes after the break, Dundee tacked on another 10 points, making Alexandria pay for another penalty and ball-handling miscue.

The Scots kept on top of their game, they never let up, Alexandria head coach Bert Todd said. Its going to take a while to beat these guys. Its their game, but were getting better. Theres a lot of talent in the area.

Finally, after nearly 140 minutes of rugby in the brief history of the Mayors Cup, Alexandria scored its first try and conversion. The seven points changed the tone of the rivalry and narrowed the deficit, 21-7, but Alexandria never got any closer despite a dominating final 15 minutes.

While Dundee held onto the Cup for the second year in a row, the day was a coming-out party of sorts for rugby in Alexandria, with a full slate of games and a youth clinic leading up to the days marquee matchup all held at George Washington Middle School.

There was a great turnout, considering its hard to get people to come to a rugby game in America, Todd said.

Students running the gamut from early elementary school to high school took advantage of the free clinic, with some using it as additional practice and others as an introduction to the sport.

Our coach told us about it at the last practice, and its a good review because I havent played since last summer, said Dale Roach, 14, adding that he and several of his friends play the sport and he plans to keep playing into the future.

Jose Reyes, a fourth-grade student from Mount Vernon Community School, normally plays every Wednesday afternoon as part of an after school club. He said hes looking forward to being able to tackle when he gets older, but when he and his friends play now its a good way to waste some energy.

Hopeful for a rugby career, his sights are already set pretty high.

I want to grow up and play professional with a New Zealand team, he said, showing an appreciation for one of the giants of international rugby.

The older rugby players who got to see action in the days main event were proud to display some of the sports redeeming qualities to the community.

Rugby is a sport thats foreign to a lot of Americans, especially kids growing up, and this is a great way to show people what rugbys about, said Alexandria player Dave Burt.

One of the best things about rugby is sort of this camaraderie or brotherhood, he said. Ive played in different countries around the globe and you always can go out afterwards and have a good time [with your opponents].

The visitors and the hosts alike were both anxious to get to the socializing that follows just about any and every rugby match.

Weve got a flight tomorrow morning so weve got to make sure we get on the flight, but well have a good few beers tonight, Kiddie said.