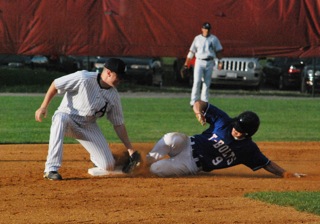 Riding the sort of momentum that comes with winning four of your last five games, the Alexandria Aces were looking for more of the same going into Monday nights home game against the last-place Silver Spring-Takoma Thunderbolts.

After giving up three runs to the Thunderbolts in the top of the 12th inning breaking a 3-3 deadlock created an inning before and getting only two back in the bottom half of the frame, the Aces left Frank Mann Field with a 6-5 loss.

Nearly three and a half hours of baseball for naught stung a little more as the Aces wasted several opportunities to pull ahead, stranding seven batters during the last six innings, including the potential game-winning run in the 12th.

We just left too many runners on base and thats hurt us lately, Aces Head Coach Eric Williams said.

[Keeping the winning streak alive] was the plan coming in and I think some guys might have gotten a little bit ahead of themselves and thought that since [the Thunderbolts] came in with a not-so-good record they could get away with a minimum game instead of a maximum game, he said.

The Aces (7-8 through Wednesday) jumped out to an early 1-0 lead after the first inning when left fielder Brad Johnson drove in right fielder Tommy Grandieri from third base, but the game became a see-saw affair soon enough with each side matching the others raise.

Not displaying the same sort of command as he had in his two previous appearances, Alexandria starting pitcher Kent Worthington got himself out of quasi-jams in the second and third innings before allowing two unearned runs in the fifth inning.

Worthington came into the game as the only starter in the league with a perfect 0.00 ERA after his two previous appearances but left after the sixth inning with his team still behind 2-1.

In the bottom of the seventh, Aces first baseman John Skaggs breathed new life into the game for the home side with a leadoff solo home run that bounced off of the scoreboard in left field.

Skaggs home run was the Aces most timely and effective display of power on a day that saw them test the confines of Frank Mann Field with several balls struck deep to the outfield.

[Alexandrias] got some big boys whove got some power, but fortunately for us they stayed inside the park, Thunderbolts Manager Jason Walck said.

The two teams played even through the 10th inning before Thunderbolts catcher Kyle Moldanado reached home in the top of the 11th on a Casey Allison sacrifice fly to right field.

The Aces leveled the score yet again, half an inning later, when Johnson, too, scored on a sacrifice fly, setting up the decisive final inning that saw five of the games 11 runs cross home plate.
Our guys did a good job of battling back, Walck said. We grabbed the lead earlier and kind of sat on it before Alexandria tied it up. Fortunately our guys didnt give up either. It was scary there in the end but we eventually pulled it out.

Nate Cudney got the win for the Thunderbolts (3-10 after Mondays win) after coming on as a reliever in the tenth inning, while Mike Bzozowski picked up the save. Josh Wedesky took the loss for the Aces.

Second baseman Steve Galella led the Aces at the plate, going 3 for 5 and scoring a run, while Johnson went 2 for 5 with a run and an RBI. Maldonado led the Thunderbolts, going 2 for 4 with a walk and scoring three runs.

Just 13 games into the campaign, Williams tried to keep the loss in perspective for his players after the game.

We have the [College Park] Bombers the next two nights, and theres a lot of games left, Williams said. I keep telling the guys its a long season and we need to keep putting things together, try to improve, and make a run for it when it gets important.

Kassidy McDonald - June 30, 2022
By Kassidy McDonald │ [email protected]om  There are hundreds of years of American history behind the name 1799 Prime, an elegant steakhouse set to open on...