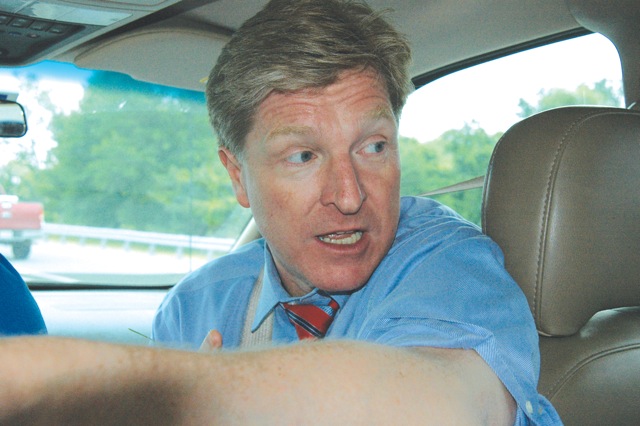 Alexandrias dog in the fight for Virginias governorship, Brian Moran, gnawed on a blade of switch grass in the front seat of a minivan headed down the campaign trail to a senior community in Loudoun County Wednesday.

He knows he is not every Alexandrians choice to beat Democratic opponents Delegate Creigh Deeds (D-25) and Terry McAuliffe in the June 9 primary and he knows winning the city in which he served as state delegate for 13 years is no gimme but the Massachusetts native is an Alexandrian and speaks as someone who earned the right to represent part of an involved and highly-educated city in the General Assembly.

Alexandria is a very engaged community, Moran said, reminiscing about the crowd that filled Mt. Vernon Elementary School with residents intent on stopping the Redskins stadium from being built at Potomac Yard in the 90s.

The former delegate lives in the West End and has embarked on a campaign road stretching further than the Potomac River to the edge of Fairfax County. He has not skipped over one county in the Commonwealth, according to his communications director a necessity for a politician living at the urban northern tip of a state with no shortage of rural expanses. Despite the breadth of a gubernatorial campaign, Morans approach has been a macrocosm of his Alexandria political efforts.

He learned from former governor and senator Mark Warner (D-Va.), a fellow Northeastern transplant to Alexandria, that getting a validator in every enclave is paramount when seeking votes beyond perceived political and cultural lines.

The concept is still the same, Moran said. Of course, [when campaigning in Alexandria] it was a validator in Seminary Valley, Seminary Ridge. Now its about validators in Southwest Virginia, Hampton Roads.
Transportation problems permeate the state, whether its poor quality roads in the southern portion or congestion in the north. Metro stations are crucial in the Alexandria context, and Moran said he would like to make state funds available for more rail transit in the city, region and state, including the prospect of a Potomac Yard Metro station.

Local development is really best left to local government, he said. What you want to do is provide localities the tools to make good decisions.

Moran sees his array of endorsements mayors and delegates from the north and south as proof he can unite Virginians much like Warner did in his Senatorial campaign. But Deeds and McAuliffe also sport a range of endorsements as well as typical Democratic values, making perceived persona especially relevant to the race.
Im not going down there as a millionaire so it is very comfortable, Moran said.

Look at the people that have endorsed me: Theyve met me, they like me and they actually think I can win.
Moran said winning suburban Northern Virginia (especially Prince William and Loudoun counties) is key to beating Deeds, a candidate often associated with rural Virginia and McAuliffe, the fundraising giant who lives in nearby McLean. He hopes his record, not his fundraising ability, wins him the nomination.

A former prosecutor and chair of Alexandrias budget and fiscal affairs committee, Moran said he is especially frustrated with McAuliffes campaign because he has never held office in Virginia but has had the financial ability to dominate the airwaves to be able to cover over his lack of any involvement in Virginia.

I didnt anticipate running against Bill Clinton, he quipped. And the fact that this is such a horse race anyway this is exciting.

Depending on the poll, any one of the three candidates is projected to win an unpredictable and tight race. But the local guy is confident he will get the chance to run against Republican nominee Bob McDonnell with some help from his own party.

On June 10, Im expecting a large check from the DNC, he said.