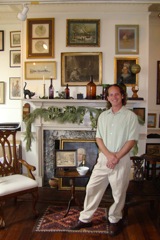 Some people are dilettantes while others, like Gary D. Eyler, owner of the Old Colony Shop, simply know a lot about a wide range of things from art to history, antiques, manuscripts and stamps. Even though he is only 47, Eyler has been actively pursuing his interest in 16th-19th century antiques, art, documents, maps, prints and rare manuscripts for 35 years. He is particularly passionate about 17th century America and has been running a successful framing and antique print and paintings shop on South Washington Street for the past 30 years.

Eyler founded Old Colony in 1989 after spending approximately 10 years working with the Barnes Gallery. When the owner, Jim Barnes, passed away, the gallery closed, leaving Eyler without a job or an outlet for his talents. Eyler decided to lease the former Barnes Gallery site and opened the Old Colony Shop.

On any given day, Eyler gets requests for museum-quality framing or fields phone calls from places like the White House. Customers stop by to show him rare, family heirlooms or talk about an old print for framing. Recently, Eyler restored the Norman Rockwell watercolors in the West Wing of the White House. The White House also had him frame the ribbons and scissors used for the re-opening of the White House Press Corps room, the Situation Room, and also the scissors and ribbon used for the U.S. Embassys opening in Afghanistan. At the request of the Vatican, Eyler framed Pope John Paul IIs Presidential Medal of Freedom.

Eyler has always had the ability to assimilate his knowledge of art, antiques and history to make fantastic discoveries. For example, a small, framed etching of a figure that hangs in his shop is an original etching by Rembrandt that Eyler acquired while in high school. I found the etching at an antiques show in a print bin for $2, Eyler said. It had an R and the date of 1631. It turned out to be an original Rembrandt etching entitled the Little Polander. This is the smallest etching Rembrandt ever produced.

Eylers passion for collecting began at an early age with his prize-winning stamp collection. By the age of 13, he was working with a stamp dealer. Three years later, Eyler became a rare manuscript dealers apprentice. The following year, he began working with Barnes. Throughout these years, Eyler read history voraciously. Although attending college was a natural progression for the gifted Eyler, he chose to continue working rather than pursue a formal education. I was fortunate enough to know what I loved doing and to have had several years of working in an apprentice role with very knowledgeable, specialist dealers and collectors, Eyler said. I knew what I wanted to do and I was lucky to have the chance.

Before he turned 20, Eyler had not only completed four apprentice years, but he had assembled a rare manuscript and stamp collection and purchased a 1595 breech-loader cannon. Since then, Eyler has acquired all sorts of interesting items. He has such an extensive collection of Jamestown artifacts that he donated 22 pieces to the Commonwealth of Virginia for the 400th anniversary celebration of the settlements founding. In 2006, his Jamestown collection was the featured Lyceum exhibit for the Alexandria Jamestown festival. The Alexandria Historical Society recognized Eyler in 2007 for his generosity and dedication to Virginias history as a result of his research, work and donation of artifacts to the state.

Skipp Calvert has been doing business with Eyler for decades and said that, Theres not a room in our home that doesnt have an Old Colony frame or rare print. Garys talent never ceases to amaze us. He is an immensely gifted artist and collector. Similarly, Courtney Elwood said, Gary gives the same care and attention to framing our childs artwork as he does framing national treasures and priceless works of art. Hes the kind of framer you tell your friends about.

When Eyler is not toiling away or talking with customers at his shop, he loves hiking and reading and is completely devoted to his wife, Donna, of 20 years and his two daughters, Erin, 16, and Lisa, 12. His own childhood was peripatetic thanks to his fathers military career. Eyler was born in Key West, where Eyler recently donated the original 1934 deed to the Ernest Hemingway house. After the Eyler family left Key West, he ended up attending 12 schools in Hawaii, Southern California, England and various places on the East Coast before moving to Virginia when he was 17.

Eyler instantly embraced the area and its rich history and particularly enjoyed hiking around the Great Falls area. One day while hiking there, he made a significant, historic anthropological discovery: petroglyphs of the oldest known depiction of people on the East Coast dating back to the late Archatic period. The area where the 3-inch high carvings are located is now preserved by the National Park Service. The three etched figures depict various states of throwing a spear and some have suggested that these petroglyphs are an ancient guide to spear throwing or are perhaps describing a hunt. I loved looking for petroglyphs as a child in Hawaii, Eyler said. I couldnt believe when I found these figures in Northern Virginia.

I love what I do. Even if I won the lottery tomorrow, Id keep collecting history and sharing what Ive learned, Eyler said. My interest in history has led to important discoveries and finding treasure that is in plain view. I love the history, quaintness and charm of Alexandria and the wide range of exposure to old and interesting things that customers bring in. I know Ill continue to learn more from the people who come to my shop.