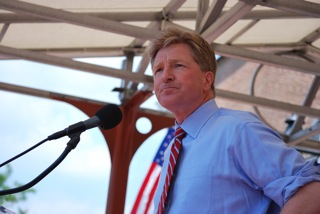 The mood Tuesday night at Brian Morans victory-turned-defeat party at the Mark Center Hilton differed starkly from the upbeat tunes and ear-to-ear smiles at his hometown rally at Market Square just one day before.

Supporters cried, asked why? and shook their heads in disbelief after voting returns made obvious that the former delegate will not hold office in Virginia in the near future.

Moran won every precinct in his hometown of Alexandria, but it was not enough to beat Deeds who, despite being the only candidate from outside Northern Virginia, carried every other district in the region.

Just before the polls closed, Morans campaign was still cautiously optimistic that the former delegate would carry the all-important Washington suburbs, according to campaign spokesmen.

Its a low turnout, but were hoping that Brian is the only candidate that really has a geographic base, said Steve Jarding, Morans campaign strategist. And in this case, [were hoping for] a geographic base in Northern Virginia where hes been known for 20 years.

Moran himself called the primary a horse race as Election Day approached. The three candidates had trouble differentiating themselves from one another to voters on many issues, so the campaigns front was often fought by the candidates differing personalities and connections: Deeds, a rural Virginian with a drawl endorsed by the Washington Post, who barely lost to current Republican gubernatorial nominee Bob McDonnell in a 2005 race for attorney general; McAuliffe, the convivial former DNC chairman and fundraising titan viewed by many Virginia political insiders as an outsider because of his work in national politics; and Moran, the Northern Virginia delegate and former prosecutor with a calm demeanor and a Boston-ish accent diluted by 20 years as a Virginian.

Morans name recognition played a role during the campaign as well. His brother, Rep. Jim Moran (D-8), is known in Northern Virginia and throughout the state for his outspokenness and has his own share of supporters and detractors. Some voters bound the two together, but others separated bloodline and politics.

I cant really say anything about Jims name affecting Brian in a bad way at all, because Jims done a lot of good things around here, said Tina Fort after voting for Moran at the Jefferson-Houston precinct in Alexandria. I guess Im just used to the name. Hes in line with what Im supporting, but Im sure the name carries in other ways, too.

As returns made the outcome obvious and Moran proponents walked around stunned Tuesday night, reasoning for the local politicians defeat swirled around the room, but mostly, supporters seemed vexed.

How did this happen? asked one supporter to someone on the other end of a phone call. Deeds carried Northern Virginia. Its over.

The reasoning for Morans loss seemed more obvious to some. The election is over. Creigh won and the Washington Post won, said Rep. Jim Moran, referring to the newspapers endorsement that Deeds touted in the region especially toward the end of the campaign, introducing himself to a demographic more familiar with its neighbors McAuliffe and Moran.

Moran made his concession speech to an appreciative crowd, championing Deeds and the Democratic Party as invincible in the November general election.

Creigh and I sat together for six years [in the General Assembly]. Maybe over those six years I rubbed off on him and thats why he was such a good candidate, Moran joked.

As he exited, Moran told reporters his next order of business is to take his kids to school in the morning.

Del. Charniele Herring (D-46), who won Morans seat in a special election after he announced his bid for governor, said the defeat will not keep Morans voice out of Virginia politics.
Hes an adviser of sorts, Herring said. He advised me in the beginning and Ill never hesitate to reach out to him.

I dont think hell be gone for that long.

Just 320,160 of 4,959,506 about 6.5 percent of active registered voters in the Commonwealth showed up at the polls on a day that started with thunderstorms in Northern Virginia and throughout various parts of the state, according to unofficial results from the Virginia State Board of Elections.

About 13.4 percent of Alexandrias active voters participated in the Democratic primary, compared with the 15.3 percent who participated in Mays municipal election. Volunteers say the weather effected turnout, no doubt.

I had to put my poncho on twice, said Russel Robinson, who stood outside of the Mount Vernon Community School from 6:30 a.m. until about 6:30 p.m. Then we called the forecast and they said thunderstorms were coming again in the afternoon!

It started raining consistently till about 9 a.m. Im sure [voters] have done things on the negative side in the rain, the snow and the cold. This is something positive, so the rain shouldnt be an excuse.

Robinson estimated that the precinct received about 35 voters between 7 and 9 a.m., usually the time with the heaviest traffic.

Before the polls closed, Morans campaign believed the rain might actually help their candidate, assuming that he had the Northern Virginia base locked up.

Its hard to say, but theres a legitimate theory out there that says the rain keeps away the less solid voters the so-called swing voters, said Morans campaign manager Andrew Roos. But the hardcore guys, they go out and vote. So for us we hope thats an ace up our sleeve.

Despite Morans hometown connection to Northern Virginia, it proved not to be the home base for which his campaign hoped.