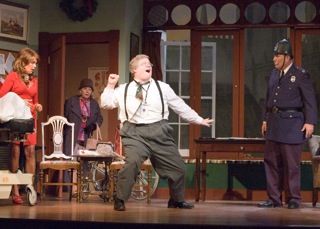 Its just days before Christmas and Dr. David Mortimore is about to give the most prestigious speech of his career one that will likely earn him a knighthood.

Imagine his surprise when a nurse he had a dalliance with 18 years and nine months ago shows up with a son he never knew existed. Such is the basis for the Ray Cooney theatrical farce It Runs in the Family, now playing at The Little Theatre of Alexandria.

Not just another comedy, Cooney combines unlikely, extravagant and improbable situations with double entendres, mistaken identity and sexual innuendo in a fast-paced plot that spirals deliriously out of control with energetic performances from the entire cast.

Mortimore (Mark Lee Adams) and his sidekick, Dr. Hubert Bonney (Jeffrey Clarke), begin piling lie on top of lie to protect his career and hide the affair from his wife Rosemary (Rachael Hubbard). The witty dialogue, physical comedy and fast-paced timing are a trademark of Cooney, who is noted for such British farces as Run for Your Wife, which lasted nine years in Londons West End and remains its longest-running comedy.

When Mortimores former paramour, Jane Tate (Margaret Maggie Bush), reappears to inform him that hes the father of her illegitimate son Leslie, he convinces Bonney to pose as the boys father as Dr. Mike Connolly (Brian Clarke), who appears in drag and is related to police Sergeant Connolly (Jim Howard), joins in the charade that inadvertently includes a senile patient who is also named Leslie (John Shackelford).

Adams, who received a WATCH nomination for Outstanding Lead Actor in the LTA production of Cooneys Run for Your Wife, is an actor easily taken for granted because he makes it look so easy. But comedy is never easy and Adams who turns in a stellar performance and the entire cast are just that good.

Jeffrey Clarke, last seen in LTAs The Eight: Reindeer Monologues, is instantly likeable as the affable second banana Bonney, while Hubbard, a delight in LTAs Leading Ladies earlier this season, provides the last laugh in an unexpected twist in the 1987 script that is clearly a hit on the LTA stage.

Jimmy Day is the illegitimate and inconvenient Leslie, who is now grown, sporting a multi-colored Mohawk and looking for his long lost dad, while Ron Field plays Sir Willoughby Drake, a fluttery gent impatiently waiting for Mortimore to get on with his speech.

In a multitalented cast, it is the voluptuous Maggie Bush that seems to anchor the show. With her incredible timing and nuanced facial expressions, she brings the house down as Mortimores illicit lover Nurse Tate. Clad in a perfectly form-fitting vixen-ish red dress, Bush deadpans some of the funniest lines of the evening.

Rounding out the cast are Christina Tersero as the meek Sister Henderson, Carol Strachan as Bonneys overbearing mother and Mary Ayala-Bush as Matron, a role she plays with a flair for physical comedy.

Shackleford, the slightly senile patient in a wheelchair, is always great fun to watch, as is Howard as the stodgy police sergeant trying to cope with the silliness.

All of this madcap mayhem is directed by the multiple award-winning Roland Branford Gomez, one of the areas most talented directors with more than 100 productions to his credit. It Runs in the Family is a masterpiece of perfectly choreographed precision, frantic action and rapid entrances and exits.

Gomez, who first joined LTA in 1968, also directed Cooneys Run for your Wife at LTA, along with the blockbuster musicals Will Rogers Follies and Scrooge: The Musical.

Set design is by the award-winning Robert Gray with costumes by Jean Schlichting and Kit Sibley.

LTA has dedicated It Runs in the Family to Bill Brannigan, who was originally cast as Drake but fell ill in the course of rehearsals and passed away May 20.

Bill was a dear friend for more than 20 years, Gomez said. The cast and crew loved him. Whenever anyone would miss rehearsal, Bill would step in to recite their lines. He knew all the blocking.

A memorial service will be held for Brannigan, a long-time respected journalist for NBC, ABC and UPI, at the National Press Club on June 27 at 11 a.m., and a Mass will be held at St. Ritas Catholic Church on June 26 at noon. Bill was just a professional trouper in theatre, added Gomez. When you have known and loved someone for 20 years, it is so hard to let go. You have no idea how much we all miss him.

As the show goes on in Brannigans memory, Gomez masterfully stages a theatrical counterpart to the dumb and dumber of film comedies, and Cooneys It Runs in the Family provides a rollicking summer evening of entertainment for the entire family.

It Runs in the Family is playing now through June 27 at The Little Theatre of Alexandria. For tickets or more information, call 703-683-0496 or visit www.thelittletheatre.com.