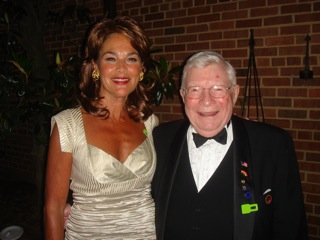 All the world is a stage,

And all the men and women are merely players:
They have their exits and their entrances;
One man in his time plays many parts …

He is known simply as Ernie no last name or introduction is necessary for the tuxedo-clad, courtly gentleman sitting in the audience at Saturdays opening night performance of The Little Theatre of Alexandrias latest production, It Runs in the Family.

I havent missed an opening night for 67 years either as a performer or in the audience since I joined LTA back in 1942, said Ernest Ernie Sult, a man who has played many parts in his many decades of performing.

From the time he hopped off his mothers lap at the age of three to recite his lines in a local Christmas pageant, Sult was bitten by the theatre bug and his life has never been the same. Born February 12, 1925, Sult has been acting for the past 80 years and has spent some of his happiest hours performing. His most recent performance was just last week in a play at Greenspring Retirement Community, which has been his home now for the last four years.

There are some wonderful opportunities for me to still perform, particularly at Greenspring, Sult said while reminiscing about his acting career. I may not get the younger roles anymore but I can still do pretty well for my age.

A fixture and celebrity of sorts at LTA, Sult was still attending what was then George Washington High School when he first joined the upstart community theatre a mere four years after it first opened in 1938. In addition to having never missed an opening night in 67 years, Sult has performed in a number of LTA productions too numerous to mention. Some of his many contributions are recognized in the LTA Green Room, where there are five plaques on the walls bearing Sults name for various achievements such as outstanding performer in a lead role.

So passionate is Sult about acting that he even performed in an LTA production at Gadsbys Tavern the day he married his wife Patricia.

I got married at St. Marys Church on a Saturday afternoon and was on stage that night over at Gadsbys, said Sult, chuckling at the memory. Not many wives would be so supportive but Patricia was just wonderful.

Sults daughter Jennifer remembers her mother telling the story of how she watched her husband perform in an LTA production after their wedding ceremony. The next day, the couple flew to Bermuda where Sult ended up doing some impromptu singing with the hotel orchestra the first night of their honeymoon. His performance was so impressive that for the remainder of the trip Sult was invited every night to join the orchestra for a song.

However, life, as in theatre, is always part comedy and part tragedy. Sult spent several years in the Marines fighting in World War II and was in the Rainbow Infantry Unit that burst through enemy lines during the Battle of the Bulge on December 24, 1944. A short time later, his unit made an unforgettable stop at the gates of Dachau concentration camp, an event so traumatic that it is permanently seared in Sults mind. His regiment pressed on to Austria, where he saw his first opera and even ended up singing on the Viennese stage.

After the war, Sult returned home and finished his education at George Washington University. He still maintains that he is the oldest guy to ever pledge the Sigma Nu fraternity. Sult then became a career civil servant serving in the Pentagon, the Bureau of Standards and the Department of Commerce, where he finally became an assistant to the Assistant Secretary of Commerce. It was his job at the Pentagon that provided the venue for his introduction to his wife, Patricia, who was a secretary at the Pentagon when Sult met her.

Patricia passed away six years ago, but she was an incredibly strong and dedicated supporter of Sults acting career. However, performing on stage was not Patricias forte, and she retired after just one acting experience in 1960 when she and Sult both had roles in Send Me No Flowers.

Poor thing, she was petrified, said Sult, his eyes welling up at the tender memory of his wife. I can still see her standing on the edge of the LTA stage with her hands visibly trembling.

Over the course of Sults own acting and singing career, he has sung at more than 60 weddings and performed in countless plays. I really loved both productions of 1776 that I was in, and I especially enjoyed playing John Adams, Sult said. Sometimes, I wonder what my life would have been like if I had been a professional actor for my career. I tried to make it in New York for a few years, but things just didnt work out.

These days Sult enjoys spending time with his daughter, Jennifer who is usually on his arm for those opening nights at LTA his son, Stephen and his grandson, Scott. He is also involved in all sorts of ventures at Greenspring. In addition to performing, Sult enjoys reading John Grisham, Dan Brown and James A. Michener novels. Ever the adventurous one, Sult is even Mr. July in the Hunks of Greenspring calendar, where he posed virtually in the buff to help raise $50,000 for charity. Sult shares his calendar page with two other military veterans, Bob MacCallum, 79, and Charlie Spitzer, 84, which was designed to look similar to Archibald Willards famous Spirit of 76 painting. Besides working with LTA, Sult enjoys being involved with the Gridiron Club and performing for their presidential dinners.

I miss my wife, Patricia, but I love my life, my family and being involved with LTA and singing wherever I am needed, said Sult, another tear welling up at the thought of his beloved wife. I have a wonderful life, but Im not afraid when the time comes, since that only means Ill get to see Patricia again.

After the curtain came down on yet another opening night at LTA, Sult, along with his daughter Jennifer, gave his customary congratulations to the cast and crew. They were fantastic. Opening night here at LTA is always magical.