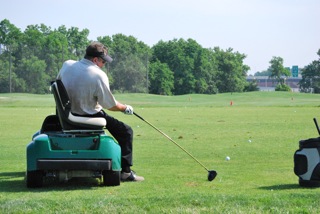 For fun or sometimes as a last resort when stuck behind a tree some golfers might try hitting the occasional ball single-handedly. On the range, they may even try to hit the ball sitting down.

Doug Beckley, on the other hand, has to do both all of the time.

Paralyzed from the waist down in an accident 22 years ago, Beckley, a Navy veteran, picked up the game just last year, spurred on by his brother and others. This year, Beckley teed it up officially as part of a team in Mondays Paralyzed Veterans Golf Open at Belle Haven Country Club, a testament to advances in technology, medicine and access for people with disabilities.

We had this tournament last year and I took a few swings and the pro said, Hey, youve got a pretty nice swing. You might want to think about playing some golf, Beckley said.

A few swings more and the golf bug took a big bite.

After the first day I was hooked, he said. I really enjoy it. Im getting the swing of it.

Beckley was one of a few paralyzed veterans to take part in Mondays tournament, one of the main fundraising events for the Paralyzed Veterans of America.

According to tournament organizers, this years event was able to raise $250,000 for PVAs vocational rehabilitation counseling program aimed at providing job training for paralyzed veterans and helping them get back into the workforce.

Were an organization that likes to make things easy for anybody to do almost anything they want to do, said Executive Director Homer Townsend, Jr.

Papale, a cancer survivor himself, was the real-life inspiration for the film Invincible, having made the Eagles team during a public tryout in 1976.

Since opening the vocational rehab program in 2007, PVA has sent several paralyzed veterans on to good jobs, with some landing jobs with six-figure salaries. Proceeds from this years tournament are going directly to the PVA facility in San Antonio, one of three around the country.