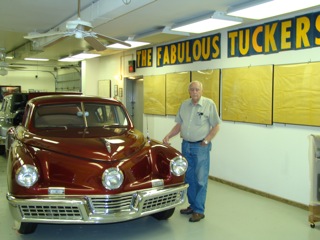 Like many Alexandrians, youve probably passed the non-descript Old Town building without an address or windows, not knowing that octogenarian David C. Cammack spends his time inside what is actually a mini-museum, the sort of place kids dream about hanging out. He has a complete suit of armor, hundreds of arrow heads, swords, scores of car, train and trolley models, engines on display and, of course, his three sleek, fully-restored, fast-backed Tucker cars, sometimes called Tucker 48 for the year they were built.

These treasures and more are hidden in an informal, private museum/warehouse in the middle of a block in Old Town where Cammack, with his encyclopedic knowledge of Tuckers, enthusiastically shares the data and information. People come from all over the country to see the Tuckers and his eclectic collection. Cammacks Tuckers were featured in the George Lucas and Francis Ford Coppola movie, Tucker: The Man and His Dream. Both of the movie moguls are Tucker car owners too.

While one Tucker car varies from the next, they all have some of the same special features like spacious interiors, a third central, Cyclops eye headlight and lots of safety features. The center headlight turns before the wheels turn so the driver knows where he or she is going.

The Tucker car trunk is in the front, meaning the powerful engines are in the rear of the cars. But they dont actually belong in a car at all; they are converted helicopter engines.

A number of the features that were created or invented for the Tucker became standard automobile features in other later model cars. The safety features included a built-in reinforced roll bar in the cars roof, a pop-out windshield, padded dash, push-button doors instead of handles and a reinforced car chassis.

Although he encourages museum visitors to watch the Tucker movie to get a sense of the history, Cammack is willing to patiently explain any aspect of the car, like when Cammack describes Preston Thomas Tuckers touching tale, and how he was in the middle of having his 80 prototypes built when he was accused of fraud.

Tucker had a simple start to life. He never went to college and began selling automobile parts from the familys barn in Michigan. Then he scored a wide variety of car-related jobs at Cadillac, Ford, Packard, Chrysler, Studebaker and Pierce-Arrow automobile makers.

Prior to World War II, Tucker began creating vehicle designs, including an armored combat car that could go 100 miles an hour and a welded military tank designed without rivets to prevent ricochets inside the cab, thereby limiting further injuries for the soldiers. The army was not interested in either creation, but it did acquire Tuckers gun turret design.

As the war heated up in 1942, automobile production ground to a halt. Car factories were converted for military use. At the end of the war, in 1946, the cars that were produced were actually the ones that were in production when the factories were re-focused for war machinery. Post-World War II, Tucker had one of the first new car designs.

Tucker announced the creation of what he called his car of tomorrow today on June 19, 1947. Investors flocked to the charming designer and his snazzy, safe automobile that could go zero to 60 in 10 seconds, with a top speed of 120 mph and a projected sale price of $2,450. He began production of the prototypes, and purchasers started lining up to acquire his cars. Tucker dealers sold potential customers seat covers, radios and other items with order numbers on them so that when Tuckers actually became available, customers had something tangible to prove their place in line.
But after only 51 prototype sedans had been made, Tucker was accused of fraud for misappropriating funds.

After a lengthy legal battle, Tucker was cleared of all charges, but it was too late. The would-be Tucker purchasers had acquired other cars, and his investors had disappeared thanks to bad publicity and uncertainty of the cars viability because of the governments expropriation of his factory. In the end, he began working on a sports car line that was to be built in Brazil: the Carioca. Mid-project, he was diagnosed with lung cancer in 1956 and died shortly thereafter at the age of 53.
I remember vividly when Preston Tucker made his 1947 announcement about his new futuristic looking car, Cammack said.

Cars have always been a passion of Cammack and his four brothers, Tom, Bob, Bill and John. After the war, the brothers all went into the commercial real estate business, together forming Cloverdale Real Estate, and they began to acquire cars. The brothers owned a total of 200 cars in the course of their collecting days.

The three Tuckers Cammack bought were just a fun acquisition initially, but they have become a solid investment. Tucker cars now sell for $200,000-$750,000. The three mint-condition Cammack Tuckers, his Cadillac and Tucker chassis and a number of the cars the brothers jointly-held will be donated to the Antique Automobile Club of Americas museum in Hershey, Pennsylvania, when they die.
Cammack explained that his real enthusiasm for the Tucker is not from the 1947 announcement or a general interest he had, but from 1972 when he acquired his first Tucker after he saw a classified ad in New York. The first car took 14 years to restore and the next two only took three to four years each to be rebuilt and restored.

For now, guests can see these vehicles at his museum. Countless Tucker memorabilia such as newspapers, photos and framed correspondence adorn the walls. The center of the room is lined with thousands of pages and files of original Tucker engineering drawings and notes that Cammack recently acquired and is in the process of organizing.

Even car neophytes will leave the diminutive, eclectic museum exponentially more knowledgeable about the unique Tuckers, and Cammacks infectious enthusiasm for the automobile is likely to rub off on any visitors.

I enjoy having visitors and telling them about the Tuckers, said the affable Cammack. They just have to call and come on by.

Back to the Future
Preston Tucker intended to mass-produce a car of the future with advanced safety, styling and engineering features. The automobile has its engine in the rear, an area where the front passenger can crouch during a collision, and a center headlight that turned with the steering wheel. The sedans most striking feature is its avant-garde styling, developed by Alex Tremulis and J. Gordon Lippincott and Company. The Tucker never went into actual production because a federal investigation into the companys management practices led to its collapse.