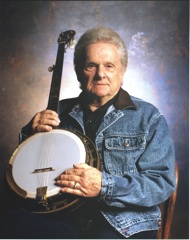 As we roll into the sixth month of 2009, the temperatures are finally starting to heat up. Along with the mercury in the outdoor thermometer, the local music scene is rising as well, with a wide variety of concerts to satisfy fans of any genre. If going out isnt in this summers plan, there are some great albums (yes, they still make these) hitting store shelves that just beg to be listened to in their entirety on that vacation road trip to the beach and beyond.

Why? One word – FREE! While you may not be a big fan of these two 90s alt-pop mellow grooved troupes, at this price, you dont have to be. At least youll get to hear Broken Hearted Savoir and If You Could Only See while reliving your college years.

Why? Do the words living legend mean anything to you? Dr. Stanley has been delighting bluegrass music fans with his sweet tenor vocals and strong banjo pickin over the last 55 years. If an introductory lesson into hills music is what youre after, this Dickenson County, Va. resident would happily be your instructor.

Vince Gill
Where: The Birchmere
When: Monday, June 15 / Tuesday, June 16

Why? To get a chance to see the man who remembered how to put a little heart and soul into county music during the 1980s and 90s while his contemporaries, led by Garth Brooks, wanted to infuse it with rock-n-roll. While the tickets may be a little higher than average ($125), you cant put a price on seeing one of the greatest voices of this generation in a room that holds less than 1,000 people.

Why? This year, the area music staple has a distinctively homegrown vibe. Except for the Massachusetts-based Stephen Kellogg and the Sixers, the line-up is filled with Virginian rock, from the phenomenally talented teen Chelsea Lee, to local singer-songwriters Luke Brindley and Shane Hines (with his band, The Trance), to the headlining acts of Virginia Coalition and the Pat McGee Band.

Hermans Hermits Featuring Peter Noone
Where: The Birchmere
When: Friday, June 26

Why? Because Austin Powers is only a movie character and Peter Noone is the genuine article. The self-effacing lead singer of one of the most successful 1960s British rivals to the Beatles and the Rolling Stones is simply a master entertainer who knows how to put the show in show business. Sing-a-longs are usually never this fun.

Doc Scantlin and his Imperial Palms Orchestra
Where: The Carlyle Club
When: Saturday, June 27

Why? Because marriages cannot survive on pizza and DVDs alone. Call up a babysitter, put on your best duds and remind your spouse that you still have some sense of romance in you after all these years. The result will be a spectacular evening of high-quality dining and enchanting big band sounds from front man Scantlin and his sassy sidekick wife Chou Chou. Dont forget to wear your dancing shoes.
Courtesy photo
Ralph Stanley and the Clinch Mountain Boys will be pickin at the Birchmere on Saturday

Its not often that one feels sympathy for a popular musician, but Marshall Mathers requires it with this hauntingly personal 18-track journey through addiction, recovery and redemption. All good art is based on truth, which is why, even after a three-year absence, Eminem is one of the greatest popular artists on the radio today.

In continuing one of the most unlikely comebacks in modern music, Green Day follows the anthem-filled American Idiot with this three-act rock opera of a post-Bush U.S.A. offering little promise to its young adults. Despair never sounded so good.
Big Whiskey and the GrooGrux King – Dave Matthews Band (now available)
As a tribute to original band member and saxophonist LeRoi Moore, who passed away last year after an ATV accident, Big Whiskey represents the Charlottesville bands most complete album to date. Focused yet fun, the CDs aura is that of a Bayou burial, equally mixing somber and celebration, often times within the same song.
Lines, Vines, and Trying Times – The Jonas Brothers (available June 16)
Okay, okay – once you get done laughing, remember that the Beatles were once a boy band. While the JoBros may never reach Fab Four status, Lines features musical maturity, both in terms of their songwriting and arrangements (adding more instrumentation into the mix). And, if this album doesnt suit you, Im sure theres a middle school girl ready to save it from the trash bin.

Are we ready for another attempt to meld rap into hard rock? If anyone can pull it off successfully, it would be Wayne, whose last album, Tha Carter III, was on most critics best of 2008 lists.