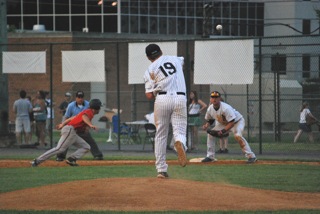 In a game that quickly became a pitching contest, it was the final hit of the night that broke a 1-1 deadlock.

With one out already on the books in the bottom of the 10th inning Monday night, Alexandria Aces centerfielder Tommy Grandieri stole the show, driving a pitch from College Park Bombers reliever Jack Crawford over the right field fence for the games stunning final run nothing less than a walk-off, solo home run.

Grandieris extra-inning heroics gave the Aces (1-2) a 2-1 victory, its first of the year, and provided a positive exclamation point for the teams home opener.

Having stranded four runners in scoring position up to that point, the game-winning home run allowed Aces head coach Eric Williams to get over those previous chances a little more easily.

Big win, he said. We got a lot of opportunities early and it shouldve been over before that but winning in grand fashion at home, opening night, hows it get any better?

The Aces managed to ride seven shutout innings from their starting pitcher Kent Worthington and a lone fourth-inning run until the top of the eighth. With two men on, Bombers pinch hitter Matt Walker plated Mike Guadagnini from third base on a ground out, leveling the score at 1-1.

Bombers reliever Ignacio Rodriguez quieted the Alexandria bats taking advantage of an unorthodox, step-out left-handed delivery after coming on in the bottom of the sixth.

Rodriguez notched seven strikeouts and allowed just one hit in four innings before handing the ball over to Crawford, who then gave up the game-winner to Grandieri.

He left (a breaking ball) a little up in the zone and I put a good swing on it, Grandieri said of the home run. I was just trying to get on base to see if we could start up a rally, but I got a good piece of it and it went.

That was the first ball I really squared up this summer, he added.

College Park (0-2) head coach Tom Cassera had no regrets about the games final play.
I thought it was a great pitch and [Grandieri] just made good contact, he said. It was the perfect time for that pitch. I thought it was a great pitch but he just hit it really well.
One pitch and one swing decided the game, but it would have been for naught without the efforts put forward from the mound by both teams.

Bombers starter Kyle Judson spread six hits over five innings, striking out four and giving up the one run in the fourth inning before Rodriguez took over.

They were doing a good job [with their pitches], being around the plate and my guys were still in the old lets try and yank it mode instead of, Hey, lets put this ball in play, Williams said.
The Aces staff, meanwhile, allowed the one unearned run in the eighth and was otherwise solid. Josh Wedesky and Jonathan Abramson split three innings of relief work for Worthington, whose seven-inning, five-hit performance left a solid impression on his coach.

Kent was lights-out, Williams said of his right-hander out of Mount St. Marys College. That was really the first time we got to see him throw a little bit and he was phenomenal.

In spite of missing out on the win for himself, Worthington was light-hearted in knowing he had his repertoire of pitches on call.

Everything was working for me, he said. I had my fastball working, my curveball was working and so was my change-up. I couldnt ask for a better night.

Grandieri led the Aces, going 3-5 at the plate with a double and a single to go along with the solo home run, while John Scaggs went 3-4, scoring a run.