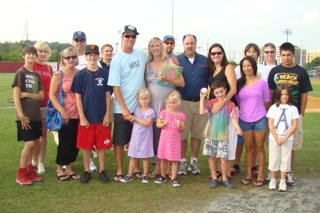 Heading into the eighth inning Monday night, it seemed the Aces were destined for the postseason after designated hitter Jesse Sikorski, with two outs in the bottom of the seventh inning, launched a low fastball well over the right field fence for a three-run home run to give the Aces a 4-2 lead.

Alexandria just needed a win Monday to play post-season baseball despite losing their previous games down the final stretch.

Even though I was down in the count, I was looking for a pitch over the plate that I could drive and I got it, Sikorski said of his second home run in as many games. Off the bat, I knew it was gone.

At that point, just six outs stood between the Aces and a playoff berth, while the visiting Silver Spring-Takoma Thunderbolts faced the last at-bats of their summer season.

As soon as [Sikorski] hit it, I knew it was out of here and I thought, Theres the game, said T-bolts Manager Jason Walck. You dont want to have to rebound from that in the eighth or ninth inning when the playoffs are on the line.

Alexandria ace Kent Worthington, carrying the 4-2 lead into the top of the eighth inning, let a leadoff single snowball into a series of mental and physical errors that translated into a five-run T-bolts inning.

Two more Aces runs in the bottom half of the eighth were not enough, though, as they ended up with a season-ending 9-6 loss, a defeat that immediately stung Worthington, the teams most dominant pitcher all summer.

Its terrible, Worthington said, when we get this kind of run support, you feel like you let the whole team down.

With pitching, Ive read about it and people tell you not to get comfortable after two innings, but after two innings, two of those scoreless innings, I knew I was getting myself in trouble when I was letting the first leadoff guy get on, he said. Then, come the eighth inning, I did it again and sure enough, when you do that its like a snowball effect.

For a two-part season finale, the scene of Monday nights final chapter between the Aces and T-bolts at Frank Mann Field resembled a fictional plot line far more than it did real life.

The teams had picked up where they left off in the bottom of the fourth inning, the T-bolts leading 1-0, when a rainstorm prematurely cut off last Thursdays game. However, the nearly 100-hour interlude between the start and finish of the game put both teams playoff hopes on the line.
With a win, the Aces would have secured the leagues final playoff spot. On the other hand, a T-bolts win coupled with a College Park loss Monday night would send them to the postseason.

Ultimately, the second of those two scenarios was the storyline Monday night. The Maryland Redbirds matched the T-bolts victory, hanging on for a 5-4 win against College Park to send Silver Spring-Takoma into the leagues postseason tournament.

The Aces, a team that has been yeoman-like on the mound but struggled at the plate for most of the season, thought they had punched their ticket to the postseason after Sikorskis seventh-inning blast.

When Jesse hit the home run, I think our guys thought they could take a breath and see what happens, but our pitching didnt come through for us after that, Aces Manager Eric Williams said.
Worthington took the loss for the Aces (17-25), while T-bolts (18-24) reliever Mike Bzozowski picked up the win for the visitors, who now go on to play the league-best Bethesda Big Train (31-10) in the opening round of the playoffs.

The Alexandria Aces opened up the weekend that would make or break their season with a crucial 4-1 home win against the College Park Bombers.

The Aces needed at least two wins on the weekend, which included Mondays continuation of Thursdays rain-out against the Thunderbolts, while the Bombers, trailing the Aces and the T-bolts, needed as many wins.

Following first two innings in which neither starting pitcher really dominated or got into trouble, it was Bombers right-hander Billy Jarboe who made the games first mistake in the bottom of the third inning.

With two outs and a full count, Aces right fielder Tommy Grandieri broke the game open, sending a Jarboe fast ball over the fence in right-center field for a solo home run that put the home team ahead 1-0.

Once you get a hit or two the bats come alive a little bit, you get one or two runs on the scoreboard and things get a lot easier for them its just getting those first one or two, Aces Manager Eric Williams said. This team is used to going a long time without a hit. We dont put many runs on the board.

Jarboe gave up the games deciding run the following inning when Aces first baseman John Skaggs singled to center field, scoring Jesse Sikorski from third. Another Alexandria run in the fifth and the sixth inning proved more than enough to put some distance between themselves and College Park in the playoff race.

Coach basically told us at this point there are only four games left, so no matter how good or how bad you play, youve got to put it all out there for four games, Grandieri said. Thats not too much to ask and I think guys put it together and focused up a bit.

Starting pitcher Justin Mazur threw six scoreless innings to get the win for the Aces while Michael Cifuentes picked up the save. Jarboe gave up two runs in four innings to take the loss for the Bombers.

Photo/Austin Danforth
First baseman John Skaggs awaits a pitch in the batters box in the Aces last inning of the season Monday night.

As the Alexandria Aces season came to a close, the host families of the players were honored during a pre-game ceremony Friday night at Frank Mann Field. Aces CEO Donald Dinan, players, team officials and fans had the opportunity to personally thank those in the community who provided a home for the players during the 2009 season.

Maribeth McCarthy and Rich Heilman, owners of Ace Hardware in Old Town, were one of the host families and thought that it was a terrific experience having Bobby Pizzuto, a rising senior at the University of Buffalo, live with them this summer.

As a host family for one of the Aces players, we were only required to offer the player a place to sleep and access to laundry facilities and a kitchen, but we often invited Bobby to join us for dinner, Heilman said. The players seemed to go out to dinner with each other most of the time.
The McCarthy/Heilman family attended a number of Aces games, but Heilman said that he often had to work at the store in the evenings and so he did not see as many games as McCarthy and their sons, Jack and Luke.

All of the players are really busy playing 42 games in two months and the players did a lot together, but whenever Bobby had free time, our two young sons really enjoyed hanging out with him, Heilman said. In fact, Bobby and his teammates all seemed to be very polite and nice. We would definitely like to be a host family again next year.