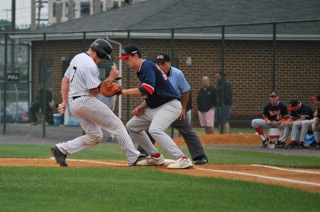 By the fifth inning of Sundays game, it was a tale of two pitchers heading in different directions.

Alexandria Aces starter Thomas Gray, whose four previous starts had been models of control and solid pitching, was anything but his normal self. Having already walked two batters (adding to his season total of three in more than 30 innings of work prior to the game), Gray gave up two runs in the fourth inning after allowing a double and an unusual triple.

Meanwhile, Maryland Redbirds starting pitcher Ben White was cruising through the Aces lineup. And, when it looked like the Aces were about to record just their second hit of the night in the fifth inning, left fielder Adrian Lorenzos line drive up the middle hit White squarely in the side, the ball dropping to the ground by the pitchers mound.

Unfazed, White calmly picked the ball up and fired it to first for the out. Ho-hum.

The Aces eventually picked up that second hit an inning later but it was no game-changer, as the Redbirds tallied three more runs off of Gray in the sixth inning and White finished with a two-hit shutout to lead the Redbirds to a 5-0 win at Frank Mann Field.

Sundays game against the Redbirds (game 1 of a doubleheader) followed much the same course that each team had plotted through the first half of the season Grays performance being the exception to the rule.

The Redbirds, near the top of the Cal Ripken, Sr. League standings all season, managed to find enough hitting when they needed it. On the mound, manager Mark Palmerino said Whites easy-going demeanor leads by example.

After getting hit in the ribs, he still had room for a joke out there, Palmerino said. I went out there to check on him, he said, Oh, that hit me? Thats Ben for you.

[White] has been a workhorse for us all year, hes a competitor, hes a guy who keeps us loose and I think he takes that to the mound and showed that tonight.

The Aces (12-15), on the other hand, have struggled to find the runs they need to defend their pitchers usually steady and successful work from the mound.

Through Monday, the Aces were last in the league in batting average (.207), runs scored (61) and hits but remained fifth in the standings. Their pitching staff, led by the starting trio of Jonathan Abramson, Kent Worthington and Gray, has the fourth-best ERA (3.22) in the league.
The end result has left the Aces coaches scratching their heads.

Weve been preaching on them from the beginning that when you get guys on, youve got to get them in, Manager Eric Williams said. But when youre leaving 10 or 12 runners on base in a nine-inning game, a guy can only throw so many pitches and keep you in that.

Sunday, that guy was Gray, who labored to find his A-game. While Williams said the two walks and tough fourth inning upset his starters rhythm, Gray downplayed any frustration after the game.
Ive been real proud this summer that I havent really walked anybody, said Gray, who nearly doubled his season walk total in one game Sunday. I didnt have everything I would hope for, I just couldnt put all of my pitches where I wanted to, which is what Ive been able to do up until today.

With about three weeks left in the season, Williams said he is going to shake up his roster in hopes of finding a winning combination at the plate.

But there is only so much that can be done in batting practice or on a lineup sheet to transform losses marked by hitting troubles and bad bounces into wins.

Right now, were in fifth place, Williams said. If you [started the playoffs] today, were going to be in it, but were not going to be in it if we give away more games. Theyve got to muster up something amongst themselves.