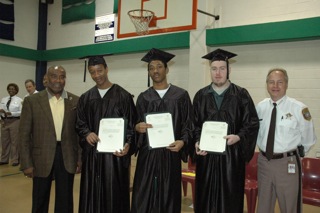 Three inmates and four former inmates earned their general education diplomas during ceremonies July 9 in the jail gymnasium. The event marked 25 graduations from September 2008 to June 2009 and is an outstanding achievement, according to Sheriff Dana Lawhorne and Krista Sofonia, the jails adult education coordinator.

The three inmates who marched in the ceremony were Larnardo Acker, Jamal Hill and Kevin Maples. They received their certificates from Mayor Bill Euille, Lawhorne and Sofonia.

Under Lawhorne and Sofonia, the GED program for inmates has produced a 69 percent graduation rate. Lawhorne insists that the program be available to all inmates who are non-high school graduates.

Under the sheriffs direction, 153 inmate-students have participated in the program that includes 930 hours of programming. Of the 36 students taking the GED test, 25 passed and earned their diploma.

The test breakdown statistics show that 48 inmates took the test with 33 passing.

I am delighted with the participation of the inmates and their diligence to receive the diploma, Lawhorne said. They took advantage of their time and this enables them to have a bright outlook on the future when they finish serving their time.

Since becoming sheriff in 2006, Lawhorne has made the GED program a priority. Several changes have been implemented such as changing the teacher from a 10-month instructor to a 12-month employee, purchasing GED books for each inmate, hiring a part-time English as a second language teacher, creating an educational housing unit and offering incentives.

The graduates get to invite family to the ceremony and afterwards they can visit, Lawhorne said. We even take pictures. The Correctional Service Advisory Board has played a key part as well. They have been very supportive of the program and provide invaluable resources. This is truly a team effort.

Mayor Euille also applauded the inmates for their hard work. Laverne Chatman, chief executive officer of the Alexandria Urban League, issued the challenge for the graduates and the assembled inmates viewing the graduation.

You should be proud of your accomplishment and use this education for a new life, Chatman said.

Other graduates who have since been released from the facility included Neico Mills and Darnell Thomas, while graduates from transition testing were Maurice Gaye and Lamar Sanders.