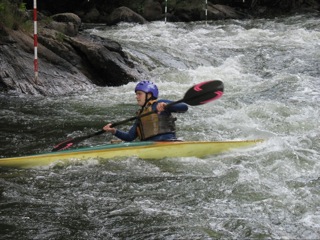 They went, they paddled, and they conquered: Alexandria siblings Liam and Eliza Malakoff returned from Canada this week toting a bouquet of gold and silver medals from the Junior Olympics whitewater games in Ontario.

The two-week-long event drew more than 100 competitors from around the world and included five major races on some of the most difficult whitewater rivers in North America.

It was an incredible experience, said Liam, 16, a rising junior at T.C. Williams High School. He won a gold and four silver medals, racing in both a single and a double canoe.

Eliza, 11, won a gold and three silvers paddling a single-seat kayak and was the top under-12 girl in the event.

The Malakoffs, Del Ray residents, are serious about the sport of whitewater slalom. In races, they must navigate their sleek boats down a twisting course through a series of gates hung above fast-moving rapids. It can look like a cross between ballet and pinball, as the paddlers bounce over waves and carve arcs through the poles.

Both are part of a D.C.-area team coached by Dana Chladek, a two-time Olympic kayaking medalist, and sponsored by the Bethesda Center of Excellence, a nonprofit group that promotes paddle sports.

This years success was particularly sweet for Liam. Last year, in his first Junior Olympics competition, he failed to finish his races after flipping in the rapids and having to escape his canoe. He trained hard all year, so standing on the podium this year was a great validation, he said.