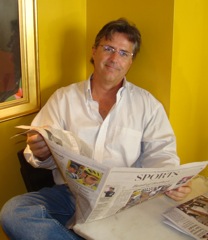 He is known around the world as an award-winning columnist, best-selling author, and now co-host of the syndicated radio show Americas Morning News. Yet to many Alexandrians, he is still simply Johnny McCaslin, the kid who rode around town on his bike to report the news to neighbors and friends.

I didnt really know that I wanted to be a journalist growing up, said McCaslin. But I did love racing around town on my bike following the fire trucks or police cars on their calls and then pedaling back home to report to the neighbors what I saw. Once I told our then-neighbor, Tom Dimond, that his newly purchased Old Town house a few blocks away had been struck by lightening and was on fire. I was a kind of town crier for my neighborhood.

The bright, engaging journalist and author has a six-week old nationally syndicated radio show, is pursued by periodicals for his travel-writing skills, has written the popular Inside the Beltway column for 17 years (and a book by the same name) and has a newly published best-selling book, Weed Man: the Remarkable Journey of Jimmy Divine. His success seems to be attributed to hard work, serendipity and being an affable person who is also fiercely dedicated to being a first-rate journalist.

At Bishop Ireton High School, McCaslin wrote for the school paper, and then as a speech communications major at Old Dominion University, he became a part-time journalist for the universitys Mace and Crown newspaper. As graduation was approaching, McCaslin was convinced he wanted to be a journalist but internships were not readily available. He enthusiastically sent his resumes around Washington but everyone McCaslin spoke with said he needed to go to a smaller area to gain experience.

So upon graduating in 1980, McCaslin headed west to Kalispell, Montana, where he sold ski equipment until he landed a radio job.

I was the on-air news director for two years, until 1982, when I became news director and anchor of Bee Broadcasting Inc. stations KJJR-AM and KBBZ-FM, McCaslin said. At the same time, I was a news stringer for United Press International and NBC.

In 1983, McCaslins professional life got a huge break when his old family friend, journalist Jerry OLeary, vacationed in Montana and visited him. OLeary, a White House correspondent for the Washington Times, encouraged McCaslin to come back to Washington. McCaslin applied to the Times and within a few short months he had made the jump to the White House.

McCaslin then made another meteoric career move shortly after he started working the White House beat.

OLeary elected to go with President Reagan and the White House press corps on Reagans foreign trips and McCaslin was fortunate enough to cover much of the Presidents re-election campaign. In six months, McCaslin visited 38 states while he was covering the Reagan campaign.

The Reagan years at the White House were good to McCaslin and he often attends the Reagan White House reunions. He has scores of tales about how fascinating it was to be part of the White House press corps and be called on short notice to go on trips with the president.

On one such occasion, McCaslin accompanied Reagan to opening day for the Orioles and stood beside the pitchers mound (just in case Reagan said anything) as the president threw out the first pitch.
Another time, McCaslin got a call to join the Reagans on a quick trip to see Thomas Jeffersons home. The presidential party landed on the Monticello lawn and joined right in with a regular tour group much to the tourists surprise. In fact, McCaslin was the last person to interview Reagan immediately before the Reagans announced that he had Alzheimers disease.

After Reagan left office, McCaslin continued to cover the White House and in 1992 began writing the Inside the Beltway column for the Times. The column provided a wide range of stories about what was really happening behind the scenes and in the corridors of power. Occasionally, his columns dealt with personal observations or discoveries, like the one about how he and President Bill Clinton share the same 8th great-grandmother, Frances Jacocks Champion, who was married in Queen Annes, Md. In 2004, he published some of his favorite stories in his first book-writing venture titled Inside the Beltway: Offbeat Stories, Scoops, and Shenanigans from Around the Nations Capital. McCaslin has also contributed to the popular Chicken Soup for the Soul book series.

Rest and relaxation time was not easy to find when he was writing a daily column nor is it readily available now that he has a daily radio show. However, McCaslin tries to slip down to the Bahama home he owns with his brother, Mark, on picturesque Harbour Island whenever he can. On one such visit, an old acquaintance who serves as an island baker/real estate agent/minister, Robert Arthur, asked McCaslin if he would like to meet drug smuggler Jimmy Morees and his wife and hear about Jimmys intriguing life. After two hours of listening to Morees stories, McCaslin thought that the wild tales of the colorful characters drug smuggling in the 1970s would make a good book.

The almost too zany to believe accounts chronicled in McCaslins subsequent page-turner book, Weed Man, are of the teetotaler Morees, who is also known as Jimmy Divine, and his drug running, high seas and Robin Hood-type adventures. The first casual meeting between Morees and McCaslin was followed by more than 13 hours of interviews, which had to be transcribed. After diligently writing for a few hours each night, McCaslin completed Weed Man, which hit the bookstands in May 2009. I had so many stories and so much material that I couldnt include it all, McCaslin said.

These days, McCaslin is busy reading and researching material for Americas Morning News, which can be heard from 6-9 a.m. on 570 AM on the Talk Radio Network. He co-hosts the show with Melanie Morgan, a longtime San Francisco radio personality.

She is a liberal who turned conservative, McCaslin said. I consider myself independent. Middle of the road. We have a good chemistry.

The Washington Times 175 investigative reporters and others supply the news material for Americas Morning News.

More and more cities are picking up Americas Morning News each week as the dynamic duo covers politics, policy issues, defense, national security and entertainment. They have already scooped other news outlets in their short time on the air: McCaslin and Morgan were the last to interview South Carolina governor Mark Sanford literally hours before he disappeared to Argentina. Upon Sanfords return, McCaslin confronted him with yet another rumor that the married governor had had a romantic encounter with an American businesswoman living in Chile during the 1990s. The next day, the embattled Sanford admitted not only to that brief affair, but a handful of other improper sexual relationships.

Confirmation that McCaslin is well respected and not a radical journalist is apparent by the wide range of invitations he has to fill in on other political commentary shows. He has been the guest host not only for Rush Limbaughs radio show, but also for Sam Donaldson, Oliver North, Mary Matalin and Michael Reagan.

When McCaslin is not prepping for his radio show, he enjoys cycling, working out, traveling and spending time with his family. A single dad, he is devoted to his daughter, Kerry, who is a senior in college, and likes to spend time with his brother, Rob, who lives on the Eastern Shore, and the rest of his family in Alexandria. That includes his dad, Robert, a retired FBI agent, and brother Mark, sister-in-law Alicia, and their children. McCaslins mother, Wanda, a devoted and devout mother who spent three decades working at St. Marys Church, died in 1994.

At 50, McCaslin has achieved the sort of award-winning success in print and on the air that most journalists merely dream of having. An attentive listener, he is quick to spot a juicy yarn with wide-ranging appealthat is if Weed Man is any indication. Whenever he can
find time after he signs off at 9 a.m. each day, McCaslin is verifying the veracity of another seemingly improbable but true tale for his next book. If the next book races along with the same sort of fast-paced, excitement of Weed Man, readers will be lining up to purchase McCaslins next non-fiction yarn.

While sad to bid adieu to the column that he penned for 18 years, McCaslin is excited to be back in radio again.

Its a bittersweet move for me, he said. But while I will definitely miss doing the column, radio is the first job I had. I love being back.