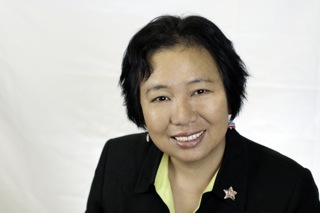 Running for delegate of the 46th District as a Republican, preferring less government intervention is not surprising its one of the partys tenets. But how she became a member of the party may be.
A recent Republican convert, Gong considered herself a Democrat as recently as 2008 when she went she supported Hillary Clinton for president. She still considers herself a small d Democrat, or one who supports democracy in general, regardless of partisan politics.

Frankly speaking, I have seen partisan, Gong said. Where I came from, partisan means the other party got shot.

Such was the societal temperature of Communist China in the early and mid 1970s when Gong was arrested and jailed after joining an anti-government underground movement. She was caught replicating by hand books like The Road to Serfdom and On Liberty advocating political, moral and economic freedom.

She is not comparing Virginias General Assembly, which she hopes to join by beating out incumbent Charniele Herring (D-46), to 1970s China; Gong speaks with more tinges of patriotism than do most born in America. But her pre-prison experience, when she was forced to move with her family from the city to a rural village to work on a farm at age 9, combined with her jail time to mold her thoughts on herself and on government: the less intrusive the better.

I came from the worst kind of big government, Gong said. Im naturally very suspicious of any government that grows too big. And I think our federal government is growing too big.
I also want people with faces like mine minorities to have more voices.

After spending nearly a year in solitary confinement, Gong attended Peking University, earning an undergraduate degree and a masters in history. She achieved her life-long dream in 1987 when she immigrated to Boston, attended Harvard University and received her Ph.D. in sociology.

I remember in jail, in the beginning, every day looks like a long day … because I was in solitary confinement and had nobody to talk to except my interrogators, said Gong, who gave up counting the days after 110. The communists never succeeded to shut me up and shut me off.

They did not. Gong had received only three years of education before attending college in Peking. Since then, the West End resident accrued 14 years of higher education, four degrees and professorial experience at UCLA, G.W. University and George Mason University.

Gong considers her strongest expertise to be under the umbrella of education, which she wants to influence on the state level. But she is more concerned with notions of higher education what it means and how to get there than elementary and intermediate education. She sees a disparity between the city and states education system and the current job market, leading to the need for emphasis on vocational training and less indoctrination regarding the status quo of higher education in schools.

Look at the reality of … the high dropout rate, especially under Hispanic and other minority communities, said Gong, who says she spoke with numerous students on the subject. We have this wrong impression of the so-called blue-collared job. A blue-collared job in the 19th and 20th century means you just go [to work] and sweat. In the 21st century, that is no longer so. The problem is that we have a 20th century education system and a 21st century job market. And the job market and education system are not matching each other that well.

Gong said another one of her focuses if elected delegate would be traffic issues related to the West End. It is a recurring quagmire of an issue throughout the region, but is expected to get worse with the erection of the BRAC federal office building at Mark Center.

Gong admits she does not have expertise on a wide array of issues, but she believes her curiosity, education and willingness to listen make her an ideal candidate. She suggested looking at other countries for ideas relating to transit, throwing ideas into the mix like employer and government incentives for telecommuting and flexible work hours to reduce traffic.

I got involved in my campaign [because] in the beginning it was just my curiosity and my willingness to speak out and make real contact, Gong said. The more I understand it, the more I realize being a delegate is just to speak for the people. And I do have a very clear record that I listen well and speak my mind.

She writes whats on her mind as well. Gongs autobiography, Born American, came out July 4. Following her path from China to America, it depicts her American ideals of freedom that Gong fostered before she came to the country and maintained through prison, immigration, education and now a run for political office in Virginia.