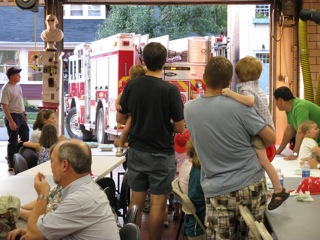 Fire Station 202s presence in Del Ray seems to go beyond the dissonant sirens of the fire trucks and ambulances fleeing and returning to the recently renovated structure on Windsor Avenue.

When neighborhood residents came through the garage doors Monday evening, most with toddlers in their arms or linked to their hands, the free cake being served by firefighters and emergency medical technicians likely had something to do with it. But so did the palpable familiarity residents shared with the public safety officers responsible for responding to emergencies in the tightly packed portion of the city.

The residents and the stations inhabitants were celebrating Station 202 winning first place in a contest among the citys eight fire precincts a contest won by flipping light switches off, opening and closing doors and allowing 202s front yard grass to dim to brown without sprinklers, saving energy and money.

Its a contest resulting directly from the citys economy, which was forced to tighten its belt this fiscal year and is expected to tighten it another notch or more next year. It results also from the citys efforts at environmental sustainability, which have been discussed more and more as a top priority among policymakers and at least initialized with the Eco-City Alexandria Action Plan.
What Im most proud of is that our bills havent increased theyve reduced, said Fire Battalion Chief Joe Hoffmaster, credited with the idea of the contest to affect a culture change within the department. I didnt foresee big money savings right off but the potential is changing our mindset.

Hoffmaster, a member of the Energy Conservation Committee of Alexandria, which meets to discuss approaches to energy efficiency and audits city buildings for energy conservation, has earned the nickname Joe Green from his colleagues and staff. Not to be confused with former Pittsburgh Steeler Mean Joe Greene, but sometimes I think [employees] make that connection, he said.

Hoffmaster said that the eight stations have saved about $5,000 in utility bills from December to April about $1,000 a month. (Figures have not yet been calculated for the recent months.) It is a small amount, but not insignificant; its a portion of the five-year plan that aims to cut costs by 20 percent by its completion, and includes different phases, like replacing inefficient washing machines or refrigerators with Energy Star appliances once they break down.

Its going to be tougher and tougher for us to save and its going to require more research and installation of solar powered stuff so that it will help us in those further years, Hoffmaster said. At that point, hopefully the culture in the firehouse will have changed and folks will realize that they need to turn the lights out and all that stuff.

The fire departments portion of the citys general fund was not cut this year. But members of the force said that the current spending levels are not ideal; squads of three firefighters currently comprise each fire engine, but there should be at least four per truck, for instance. The intra-station efficiency efforts save money, but that money will not necessarily return to the fire department. Still, it nicks away at the citys budget woes, which benefits all city-funded entities, including the Alexandria Fire Department.

According to a report that audited the department based on the emergency response to a fire last August on the West End, the fire department still needs 52 new firefighter positions at a cost of $5.9 million a year to meet national standards. But these figures are based on only one aspect of what the fire department does, and Thiel said that there are plenty of other needs to make it an optimal, contemporary, 21st century fire department.

Thiel worked closely with the City Council last budget season and said they have made progress on other needs, like gaining funds to hire four more Emergency Medical Technicians and adding manpower to the Emergency Medical Services administrative staff.

Funding for an $8.3 million fire station in Eisenhower Valley is included in the citys capital improvement plan to increase coverage area, as well as major renovations to the Beverly Hills Fire Station on Cameron Mills Road.

In a fire department whose newest station is 36 years old (until the Potomac Yard station becomes operational sometime later this year), such improvements will make saving money and energy easier, Thiel said.

We have windows at some stations that literally dont close, Thiel said.

The city could benefit from another fire department on the West End as well, to increase its coverage area and decrease response times, officials said.

A new fire station is set to open at Potomac Yard on Route 1 soon but resources will be diverted from Station 202 to operate it. The fire engines will move there, while the EMT resources will remain on Windsor Avenue.

Many residents favor the new station, which is nearby and easily accessible to Del Ray on the Route 1 corridor, but some people are disappointed we are losing a fire station, said David Fromm, president of the Del Ray Citizens Association.

At the moment, the fire station is right in the heart of the community, he said. Now were going to be at the edge.

The response times should not change too drastically, Hoffmaster said, with the residents closest to Station 202 being affected most. The stations safe room will still be in action, and Thiel said the engines are not stationed there all the time anyway because of the dynamic nature of emergency response and regional cooperation.

The Del Ray residents seemed understanding of the move Monday, though disappointed that theyd be losing part of a fire station that has become a presence in the community at First Thursday celebrations and other events over the years.

Station 202 was one of the first stops for Jen Desautels on the way home from the hospital after giving birth to her son Charlie. He had spent time in the neonatal intensive care unit because of respiratory issues and his mother was told to alert the local emergency response team so that they would be prepared for such an emergency. Charlie required a monitor for his breathing and Station 202s emergency database was connected to it.

Here we were, coming back from the hospital very emotional about the fact that he had this monitor, Desautels said. The fireman I spoke to had told me that his own daughter had had a monitor. He totally helped me be more comfortable about it. They were very kind and understanding to us, so yes, we love this fire station. They definitely made us happy to be here.

For me, one of the things I like about this city is the neighborhood and the connections between the residents and the fire department, Thiel said.

The contest aimed at saving money and the environment could free up funds, albeit indirectly, for more resources and a larger presence in the community, increasing these kinds of relationships and the safety of the neighborhoods surrounding the citys fire stations.

Our main concern, what we wanted to do tonight, is to show the public that the fire department does care, Hoffmaster said Monday. We know that [the stations funding] is coming out of their pocket and we just want to make it a little bit easier.