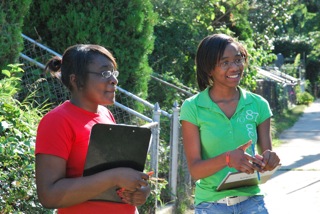 A couple of miles, dozens of door-knocks and one minor bout of dehydration later, they retreated to home base after another adventure in community organizing.

Along with eight other students interning this summer with Tenants and Workers United, Obeng and Gook, both 16, are in week number two of their introduction to activism something many of them and their advisers hope blossoms into a life-long practice.

For some, this summers experience could turn into a multi-year commitment that provides them with a full college scholarship and their first full-time job, program advisers said.

Thats a bonus to this whole thing, Obeng said. After all this, if were lucky, we get to have that. Its a big bonus.

Rather than aiming for a more traditional summer job or going without a summer activity the group of rising high school juniors sought out the TWU program, eager to get involved in the neighborhood and not sit around the house, relegated to Facebook or MySpace and relative inactivity.
Most of my friends are probably at home just watching TV, Gook said, walking down a Del Ray sidewalk Monday.

Obeng said of her internship, This is way more fun [than a regular job]. I dont get to travel as much, but its fun.

After talking with her father, Obeng realized that the TWU internship would be a way of opening new doors to learn a lot more, not just something to do for the summer, but to get something out of it.
And with that, it seems, the program is already fulfilling one of its goals.

Theyre the next generation of idea people action people, said TWU Executive Director Jon Liss. So they need to start thinking about what sort of world they want to live in and how they want to create it.

Hopefully it leaves them coming out of this program with some sense of a life with a purpose.
Liss said that the program involves gaining a deeper understanding of some of the varying and broad-ranging social conditions existing in Alexandria and elsewhere, like health care and education, in addition to a basic understanding of the concepts of community organizing and activism.

The TWU program is one of six such programs around the country supported by the New World Foundation, which works to increase resources and opportunities for all members of the community on a local level, including workers, women, minorities and the poor, according to its website.
The Alexandria students met their counterparts from programs in New Mexico, Los Angeles, New York City and Florida at a community organizing retreat in New York late last month.

TWU program adviser Esteban Garces said the students have more than made up for their relative inexperience in other ways.

Ive been impressed with them, Garces said. Their level of maturity impressed me the most theres an aspect of leadership in all of them.

If Monday afternoon was any indication, the students dedication is there, too. Realizing she was dizzy from dehydration, Obeng sat down, resting with a glass of water from a neighbor, before she and Gook opted to resume their door-knocking instead of calling it a day.

Theres a lot of talking and reaching out, Gook said. It will help me become more of a leader and not be so shy.

Obeng said, Its a lot of work. Its harder than it seems, adding that aside from plenty of energy and a good pair of walking shoes, working door-to-door in the community requires extra helpings of optimism when their efforts fall on uninterested ears.

Its disappointing, Gook said. But I know that there are probably other people who come by so if they dont hear from us, they could hear from someone else.

In their attempts to affect their own community persisting through rejection and disagreement with their cause the students said they have drawn inspiration from the work and experience of President Barack Obama, who found his political roots during his work as a community organizer in Chicago.

Most of my friends always talk about Obama and what he did, Gook said of realizing some of her ambitions in community activism. I should do what he did to be like him, be as successful as he is.

Obeng, who aspires to work in the United Nations, said, Its the whole change thing, a lot of it. Its the whole big picture. The thing that drew me to [TWU] is that it wants to bring people together. I just like what its about.

The halls of the UN may be several years away from canvassing Arlandria and Del Ray, but Obeng, Gook and the other interns have to start somewhere.

Our hope is that this generation these young folks are in a very exciting moment right now and over the next few years, Liss said.