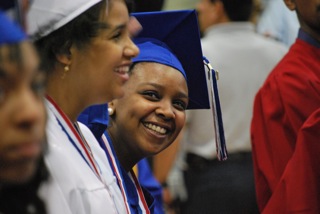 Their 183-day senior year, one that some thought might never end, finally found closure Thursday in a sea of red, white and blue caps and gowns.

Salutatorian Thomas Lynam, headed to Yale this fall, rued that very sentiment (the Alexandria school year being three days longer than Virginia code requires) in his speech but did his best to find the silver lining.

Back when second semester started, I think any two-bit doctor could have diagnosed us with senioritis, Lynam said. Indeed, June 25 seemed a very faint light at the end of a very long tunnel.

Id like to think that, deep down, this deep inability to get to summer was ultimately caused by good times, Lynam continued. We should be thankful for those three days for the time to reflect; not on when we had to be here but when we chose to spend time in the company of fellow Titans.

After holding its last several graduation ceremonies at the Patriot Center, T.C. Williams brought the celebration back home this year. Hosting commencement exercises for the Class of 2009 in its very own Gerry Bertier Memorial Gymnasium marked yet another first for the new T.C. Williams campus.
Some 664 Titans said goodbye to their high school years, receiving diplomas in front of thousands of family members and friends.

We are the last class to have the privilege of experiencing the old building, which I feel has given us a connection with its history and a great appreciation of our new, green building, Valedictorian Sarah Noll said.

Reflecting on the era of his own graduation in his opening remarks, Alexandria schools Superintendent Morton Sherman drew comparisons between President Barack Obama and the man who had just stepped into that job when Sherman left high school, President John F. Kennedy.

Sherman noted the accomplishments of his own generation and paralleled them with the current generation of graduates and the election of President Obama, whose message of hope Sherman said is apt for T.C. Williams newest alumni.

I believe that todays proud graduates might best be referred to as the new generation of hope, Sherman said. Just as I saw a young president ignite the world with possibilities, so do you see a remarkable new president who asks all of us to hope, to have the audacity of hope.

Noll, too, stood at the podium envisioning the potential of the new graduates at the end of their final 183-day term in the Alexandria school system.

I look out at a room full of future doctors, teachers, chefs, lawyers, film makers, mechanics, architects, engineers, scientists, athletes, entrepreneurs and, yes, some undecided, said Noll, who is going to Pomona College in the fall. Today, our options are endless.