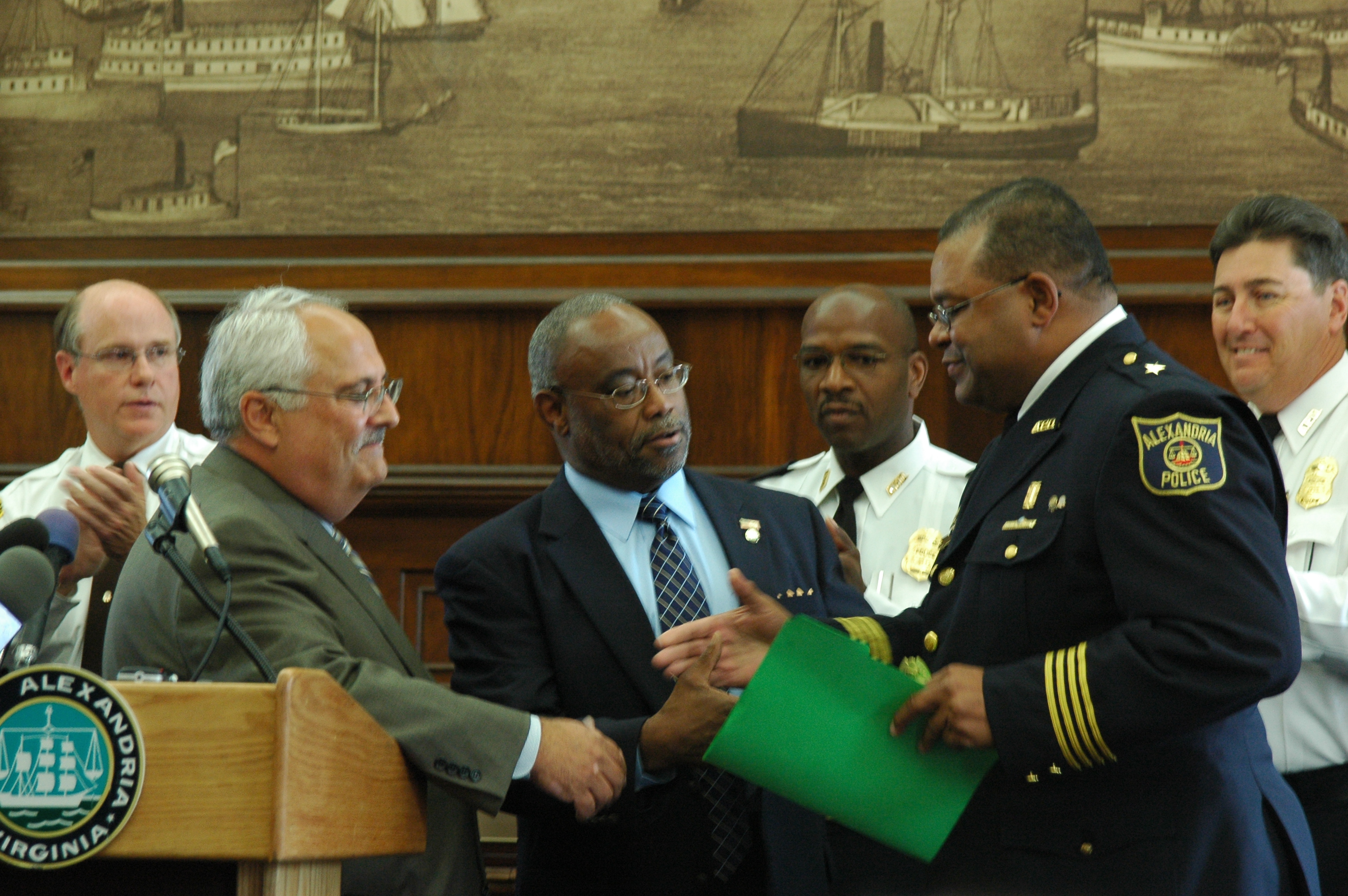 Newly appointed Chief of Police Earl Cook etched another first in the city’s history books Tuesday when he was promoted to the highest office in the Alexandria Police Department the first black chief in the city’s 260 years of existence following a 30-year long tenure with the city’s police force.

The former punt return specialist for the famed 1971 T.C. Williams Titan football team received the news Tuesday morning and gave a press conference Tuesday afternoon at City Hall, where he accepted the appointment from City Manager Jim Hartmann to preside over about a 400-unit force.

“The challenge is great but I have tremendous confidence in the officers, commanders, civilians and volunteers in the Alexandria Police Department,” Cook said in front of a crowd of family, friends, colleagues and media. “Under my tenure as chief of police, I make a goal to expand on what is already great service for the City of Alexandria.”

Cook was born and raised with six siblings by his mother and father in The Berg, a neighborhood in Old Town comprised of public housing where he met and grew up with Mayor Bill Euille, the city’s first black mayor. The two went through the public school system together, though they are different ages, during what Euille said is a 40-year-long friendship.

“He’s not only a member of our police force but also the weather vain of our community,” Euille said. “He’s a role model, a mentor, a strong leader, but most of all he’s a well respected caring person, and those of us who have known Earl for many years know that he would give you the shirt off his back.”

“It’s amazing,” said his mother Marie Cook. “I don’t know how to say it because I’ve been so excited, trying to keep with my son and make sure I’m going to stand by him till the end while he’s getting everything done, and trying to help out wherever I can.

“I don’t know who’s more excited I guess both of us,” she said.

His deep roots in the city and career-long experience on the police force, including most recently as executive deputy chief, made the decision easier for Hartmann, who mulled it over on vacation last week. He did not perform any internal or external interview process as suspected, noting that when Baker created the executive deputy chief position three years ago, it was to have “a clear number two in the department and a real mindset for future succession planning.”

“One of the things that I’ve always known is that we grow our strength internally,” Hartmann said. “We don’t always, [but] sometimes when I’m hiring leadership for a department, I will do both an external and internal interview process. I did not feel like that was necessary in this case.  I think [Cook] was absolutely ready and capable of moving into that position.”

Euille said, “The thing that I think really speaks for us in terms of why Earl was selected for this position is because not only is he a lifelong resident, not only did he spend 30 years on the police force but everyone in this city … have all said to us that we already have in place the right person at the right time to lead this outstanding department.”

In 1988, Trevor Thompson interviewed with Vola Lawson, the city manager at the time, and won the job, according to a city spokesperson. He would have been the city’s first black police chief had the city not found out that he was simultaneously interviewing for another job in Durham, N.C. Lawson called Thompson and he withdrew his name from the running that night.

Cook said he would be “remiss” not to address the historic significance of his appointment.

“Alexandria has a rich history of individuals and organizations who served the cause of civil rights,” Cook said. “Their courage and sacrifice created a path for me to stand before you today and I hope to provide a bridge for others in the future.”

Ceremonial events took a back seat to Cook’s new job at hand and addressed the issues facing the city’s police department. The city has asked all departments to cut spending where possible, but Cook sees the department as becoming more technologically advanced than he says it already is a core of the department in his opinion, not an adjunct cost.

“It is achievable,” said Cook, whose department expects to move to a state-of-the-art facility in two years. “Anybody dealing with technology knows that that also comes with tremendous support costs. So far, Council has supported us in the development and enhancement of all our services.”

The new police chief addressed reporters on Baker, his predecessor whom he thanked in his speech, after being asked if it was a reference to the former chief’s recent DUI. He responded that it was a “natural assumption” but it was complimentary in nature.

“From running the internal investigations part of our police department I am very aware of our foibles, our successes and other things that happen in the agency,” he said. “Integrity has always been our hallmark and when we make mistakes we’re going to own up to them and were going to move forward.”

However, Cook said he generally agreed with the department’s policy against releasing incident reports to the public unless there was a sincere issue of public safety.

“If we don’t police ourselves than we are not doing our job in any way shape or form.”