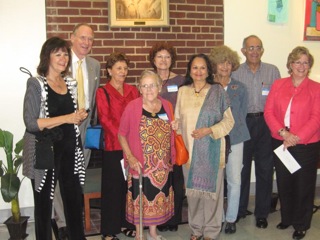 Young at Art celebrated its 23rd year on Thursday, August 6 with an opening reception, awards ceremony and exhibit launch at the Durant Recreation Center.

The juried show was open to all metro area artists ages 55 and older and has consistently attracted accomplished artists who work in all mediums. Works by teachers, professionals and amateurs have been submitted and accepted.

Isabella Hughes, Associate Gallery Director at The Art League Gallery, served as juror. Hughes, who holds a BA in art history from Boston University, is also a freelance curator. She has worked with the visual arts in various capacities at the Museum of Fine Arts in Boston, the Institute for Contemporary Art, the Boston Center for the Arts and the Vera List Center for Art and Politics in New York City. She is serving as co-curator of I Ran Home, an exhibit on Iranian Diaspora culture, diplomacy and art, which will open in Berlin in March 2010.

The 68 pieces of art at this years Young at Art represent the works of 55 local artists. Nearly half of the artists were present for the reception to discuss their work with those attending the exhibit opening.

Honorable mention winner Jeannine E. H. Pappas of Leesburg, said that she was proud that her water color (titled Before The Storm) was being honored. She delighted guests with how she created her work, but let everyone know that this one is not for sale! Much of the art is for sale, though, and prices are noted next to the art being displayed.

Two pieces of art by Ruby York Weinbrecht were selected an acrylic titled Separate But Equal, and a mobile made of wire and glass titled Sue, With Eyes of Blue. Peggy Wagner and Richard Graham delighted those attending the reception as they spoke about the subjects of their water colors titled Trojir Garden Steps (Wagner) and Beach House (Graham).

One of the most innovative and captivating pieces was a wood sculpture by Sy Wengrovitz titled Lunch at Checkerboard Caf, which also received an honorable mention. Nina Tisara, a well-known local photographer, received an honorable mention for her black and white photograph Shadow Dance. And, for those who think that todays art is going to the dogs, there is the must-see creative placement of Samuel Bleiers Acrylic titled The Dogs. Why? Lets just say that you need to attend the exhibition to see for yourself.

This is the second year that the Goodwin House Foundation and Senior Services of Alexandria have co-sponsored the show. When RSVP, (Retired Senior Volunteer Program) was looking for a new sponsor for the show in 2008, both GHF and SSA were at the ready.

We are delighted to work with SSA and carry on the tradition of RSVPs desire to showcase the works of talented local artists, said Jeanne Jacob, executive director of Goodwin House Foundation.

The winners of this years competition are: