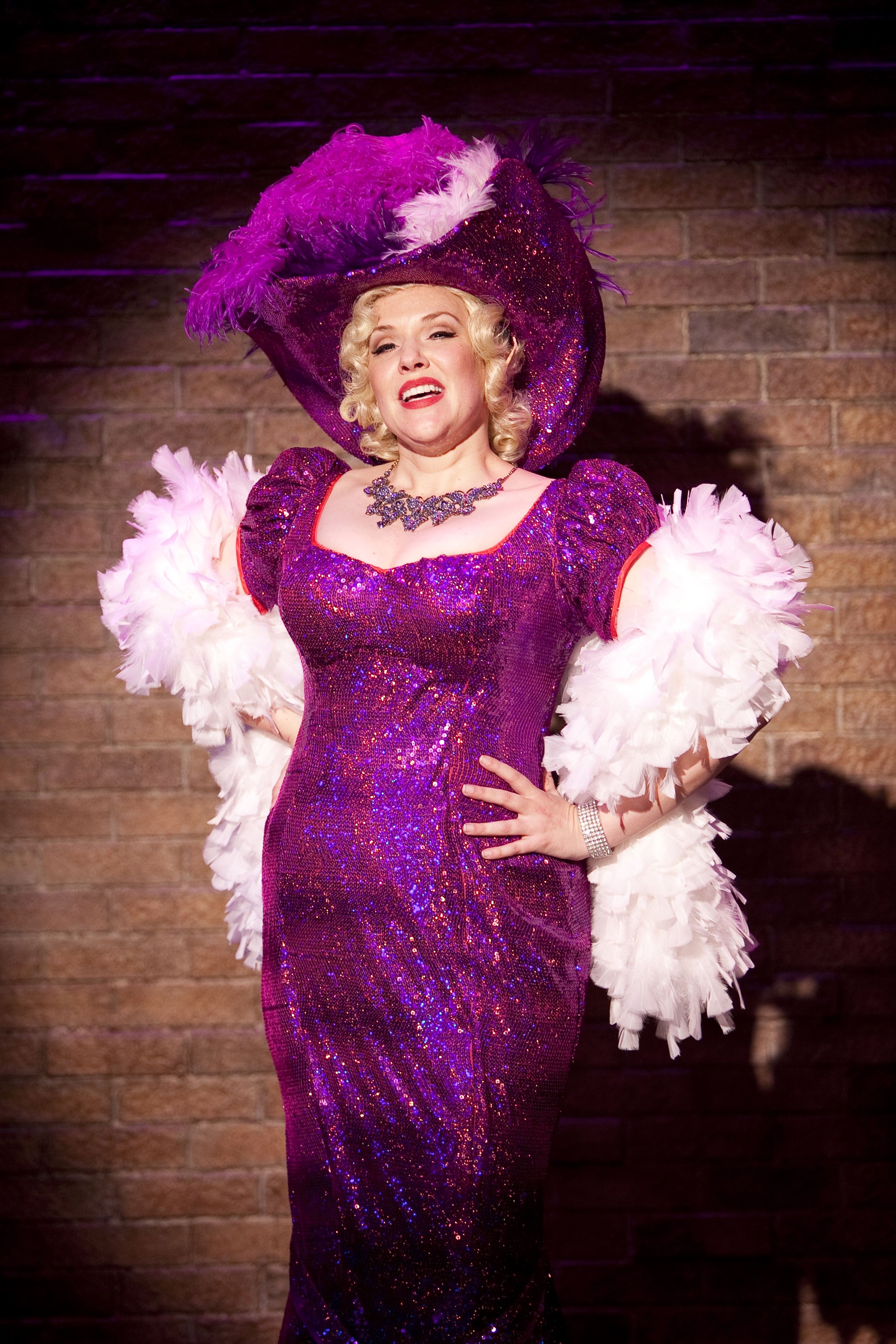 Shewas a one-liner dispensing diva, “the debutante who came out in 1910 andhasn’t been home since,” and now the saucy and seductive Mae West is thefocus of Dirty Blonde, a touching comedy by Claudia Shear now playing atSignature Theatre.

Conceived by Shear and James Lapine, the play with music tells the storyof Jo, an aspiring actress, and Charlie, who works in the film archivesdivision of the New York Public Library. Both lonely and obsessive West fans,they meet while visiting West’s grave and form an unusual friendship based ontheir mutual fixation on the silver screen siren.

Interwoven with the tale of Charlie and Jo is a biographical sketch ofWest and her unlikely rise to stardom. A brassy, buxom “dirtyblonde,” West was neither traditionally beautiful nor talented, yet shescrupulously honed her image into that of the legendary sultry sex symbol.

Making its Broadway debut in 2000, Dirty Blonde was nominated forfive Tony Awards, including Best Play, and is one of the few plays in historyto have its entire cast each nominated for a Tony Award.

Shifting between the two storylines, the script is cleverly crafted withWest’s own signature double entendres and the multitude of roles arebrilliantly played by a mere three actors that comprise the cast.

Leading the talented on-stage trio is Signature favorite and Broadwayveteran Emily Skinner, a Tony Award nominee for her role in Side Show.Skinner deftly moves between the role of present-day Jo and the iconic Westover the course of her many decades in show business.

Skinner is especially skilled as she portrays West in her later years a time when the aging star had become a caricature of her own invented persona.The gifted Skinner seamlessly transitions from Jo’s hurried modern-day New Yorkaccent and West’s purposefully measured drop dead drawl.

In addition to Side Show, Skinner has appeared on Broadway in TheBest Little Whorehouse in Texas, James Joyce’s The Dead and TheFull Monty. She also previously appeared at Signature in Ace and TheWitches of Eastwick, and at the Kennedy Center as Agnes Gooch in Mame.

Hugh Nees is Charlie, the shy, likeable misfit who once spent time withhis idol in her later years. Nees ably plays several other male roles but it isin these flashback scenes with West that his performance is most poignant.

The multi-talented J. Fred Schiffman plays the greatest number of partsas he functions as on-stage piano player/narrator, among a host of other roles,as well as West’s husband and manager in numerous scenes. Schiffman, with 12Helen Hayes nominations and three wins to his credit, is most impressive inhis brilliant portrayal of Ed Hearn, a gay former vaudevillian who becomesWest’s paid confidant.

Director Jeremy Skidmore takes the multi-layered script with complex,overlapping stories and delivers a clear, entertaining production that ishighlighted with dazzling costumes by Helen Huang. Much of the humor in theshow is taken directly from the hour-glass icon’s own scripts, and Skidmorehandles the numerous time and character transitions with perfect timing.

Not merely another impersonation show, Dirty Blonde is a seriesof vignettes that are both outrageous and touching as Skinner’s portrayal ofthe rise and decline of the sultry star gives a glimpse of the woman whoenvisioned herself an ingnue well into her 80’s.

Winner of the 2009 Regional Theatre Tony Award, Signature is justlyrecognized as one of the most exciting theatres in the country. And as Maeherself would say, “Come up and see me sometime.
“