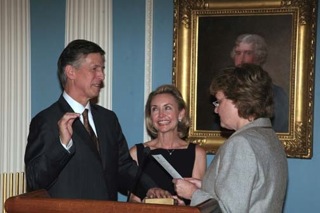 If anyone is prepared to serve their country on Day One, it is Alexandrias Donald S. Beyer, Jr., who begins his new job Monday morning in Bern, Switzerland, representing the United States as ambassador to the Swiss nation and the principality of Liechtenstein.

The former lieutenant governor and successful business owner raised $1.5 million for President Barack Obamas campaign and helped deliver Virginias 13 electoral votes to the Democrats for the first time in 44 years. Beyers dedication, hard work and success are now being channeled into reinforcing Americas amiable relationship with Liechtenstein and Switzerland, a major U.S. trading partner and home to the worlds most extensive private banking ventures.

Switzerland has become a central partner with the United States to combat terrorist financing, money laundering, corruption and the financing of weapons of mass destruction, Beyer said during his testimony before the Senate Foreign Relations Committee, noting that both Switzerland and Liechtenstein are key players in Americas efforts to thwart international financial corruption.
Senator Mark Warner and Congressman Jim Moran greeted Beyers appointment with enthusiasm.

My wife Lisa and I have known Don and his wife Megan for over 20 years and we dont think that President Obama could have made a better choice for our ambassador to the nations of Switzerland and Liechtenstein, Warner said.

Moran provided his vote of confidence when he said, Don probably represents our most valuable export, that of idealism and faith in Americas values and goodness. I cant think of a better representative for the best of America than Don and Megan.

Beyers wife Megan, a life-long Alexandrian, is humbled as she looks forward to this new chapter in her life.

When the president addressed many of the new ambassadors to European countries, we felt so proud knowing wed been selected to serve our country. Megan said. We were honored just to know that Don was even on the list to be considered as ambassador to Switzerland. Don and I have always been in and out of public service, and it will be great to be able to serve the American people in Switzerland.

The actual job of serving as an ambassador for the U.S. can vary from country to country, but for the Beyers there will be diplomatic duties including hosting a number of official events for Americans traveling to Switzerland or Liechtenstein. Megan, an accomplished businesswoman, journalist and Emmy-nominated media personality in her own right, will play a significant role in hosting the various receptions and meetings.

While there is no requirement to entertain, Megan and I want to showcase the best of America in a way that is relevant to the Swiss people, Beyer said. For example, when 16-year-old Sasha Diguilian, who is a world champion climber from Alexandria, comes over to compete in Switzerland later this month, we are going to build an event around her. Well invite the Swiss climbing community to meet her. In November, Alexandrias Craig Venter, the genius who first decoded and mapped human DNA, will be in Switzerland and we are going to host an event for the Swiss scientific and medical community.

Megan added that holding receptions for accomplished Americans who are visiting Switzerland or Liechtenstein is consistent with what the Beyers are being asked to do in these two countries.
Secretary of State Clinton and President Obama want to promote public diplomacy and American values while learning from and respecting the unique culture of Switzerland, Megan said.
Preparations for Beyers diplomatic post have included extensive briefings and seminars.
I have had over 70 briefings to help me prepare for the job of ambassador, and the briefings ranged from Homeland Security to the Commerce Department. Plus, all of the new ambassadors also attend a two-week session of training seminars, explained Beyer.

To further prepare himself, Beyer has started learning German, the official language of the canton of Bern as well as Liechtenstein, and one of the four official languages of Switzerland along with Italian, French and Romansh. Since his appointment, he has dedicated two hours each day to studying German and plans to continue with an hour of German every morning before the embassy opens. I think that will help show the respect for the Swiss culture, Beyer said.

For Megan, moving to Switzerland will be a radical change.
I have always lived in the same zip code area even before there were zip codes, Megan said. I was born at the old Alexandria hospital and I have always lived in the same area of Alexandria except for when I left to go to college in Richmond and when Don and I moved to Richmond when he was Lieutenant Governor.

The ambassadors duties will mostly be in the Swiss capital of Bern, a city of 125,000 that has some similarities to Old Town.

But there are some things that are unique to Old Town that Megan will especially miss.

I love going to the Farmers Market on Saturdays, and I love the small town feel of Alexandria. So it is hard to say goodbye to old friends, but I think we are going to have a lot of people visit us, Megan said.

The Beyer family could be posted in Switzerland until 2012, but the duration of the ambassadorial assignment is unclear.

The typical ambassador, who is not career Foreign Service, serves for about three years or the remainder of the presidents first term, Beyer explained. However, the White House sometimes calls ambassadors back sooner because they have other jobs for the person or because the president has someone else hed like to have serve as ambassador.

As he prepares to begin his new job next week, Beyer summed up his feelings, saying, I am really looking forward to returning to public service and serving our country. Ive been eager to find a way to get back into public service. Several times I considered running for a statewide office again, but that would have been too hard on my family, especially with two young teenagers. For us, going to Switzerland is the perfect way to blend public service with doing what is best for our family.

So Wholl Be Minding The Store?

The eight automobile dealerships that Beyer owns and has helped run with his family for the past 35 years will operate without him while he is away and Beyer has stepped down from all boards on which he served prior to his appointment.

While we are away, my brother and sister will continue to run the dealerships, Beyer said. My sister is the chief financial officer and my brother and I have worked together closely for years. We also have the next generation involved in the dealerships, too. My three nephews and my daughter, Stephanie, all work with us. Stephanie is the marketing director and internet director.

While he is Chief of Mission in Switzerland, Beyer will have to put his charitable concerns at home on hold. For more than 25 years, Beyer has given his time and talents to the boards of many health, philanthropic and public policy organizations. He and Megan were two of the founders of the Alexandria Community Trust and Beyer has served as chair of its board since its founding in 2004. Beyer is also a past president of the board of Youth for Tomorrow, former Washington Redskins coach Joe Gibbs residential home for troubled adolescent boys and girls.

The Beyers have been in overdrive since the nomination was formally announced in June and confirmation hearing was held July 16. Megan has been helping their two children, Clara, a rising high school senior, and Grace, a rising freshman, prepare to change not just schools but countries, and move away for a few years from the only neighborhood they have ever known.

Both girls will attend the International School in Bern, and
although Clara and Grace are said to be excited about their move, they will miss their friends. Beyers two older children, Donny and Stephanie, will remain in the United States.