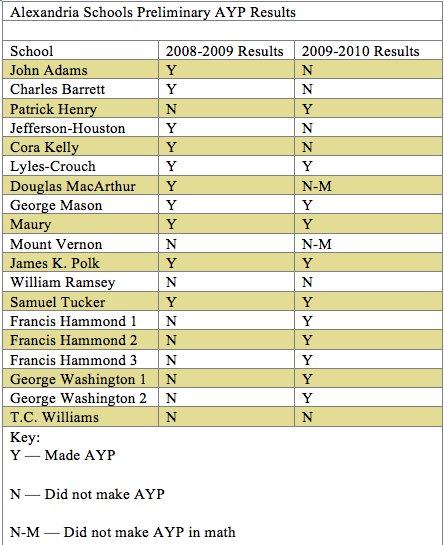 The results are in, and while the Alexandria City Public School preliminary numbers demonstrate some familiar, “challenging” trends, they also provide some groundbreaking news for meeting the federal government’s Adequate Yearly Progress standard, according to results released by the Virginia Department of Education last week.

For the third year in a row, the school system did not make AYP the series of ever-rising benchmarks set by the No Child Left Behind legislation that ultimately reach 100 percent passing by 2014 but for the first time ever the city’s middle schools made the grade in English and math.

Earlier this summer, school officials had projected that the middle schools could achieve AYP, which is different than the state’s accreditation standard but based on the same standardized testing.

Math scores in particular had been a bugaboo for the middle schools but implementing new, focused programs last year in the subject proved to be part of a winning equation, school officials said.

The AYP standard in math rose to a 79 percent passing rate this year, up four points from the year before, while the English measure also rose four points to 81 percent, according to the Virginia Department of Education. Statewide, 71 percent of schools and only 45 percent of school districts met AYP.

According to the preliminary statistics, nine Alexandria city schools met the AYP standard compared to 10 the year before.

In some cases, like those of the middle schools, schools met or exceeded the federal benchmarks after not having done so in the past, and others did not keep up with the increasingly rigorous measures.

Meanwhile, T.C. Williams High School again did not meet the standard and Cora Kelly, John Adams and Jefferson-Houston elementary schools did not make AYP after doing so last year.

Some of the results did not surprise school leaders, who had seen similar situations before.

Amy Carlini, the schools’ director of communications, said, “I wouldn’t say that anyone was surprised. I would say that there were a lot of areas where we were very pleased with the increases we were not happy that some of our students still are not meeting minimal benchmarks.”

In English in nearly every sub-group of students Alexandria schools saw a higher rate of improvement than the state average.

However, with the exception of the city’s white students, the city still lags behind. ACPS students improved from 80 percent passing last year to 85 percent in the most recent batch of English test scores. Statewide, 87 percent of students passed last year compared to 89 percent this year.

Seventy-six percent of Alexandria students passed the math portion, improving three percent from last year, while the state average stood at 86 percent, according to the state.

The No Child Left Behind Act mandates 100 percent passing rates for both English and math loom for 2014, but school leaders are already talking about trying to beat that deadline.

“The School Board, at our retreat earlier this summer, had a conversation as to can we make the NCLB 100 percent passing benchmark by 2014, if not earlier, and the superintendent threw out the possibility of 2011,” Folkerts said.

However, to reach that perfect passing rate, Folkerts said the work will need to continue to improve at all levels, implementing effective programs like those that already proved successful at schools this year.

“The challenge, too, with the NCLB is that the [standards] go up every year, the bar is always rising,” she said. “I think it’s incumbent upon us to support the recommendations that the superintendent brings forward, make sure the funding is there for the proper interventions to help schools meet these benchmarks.”