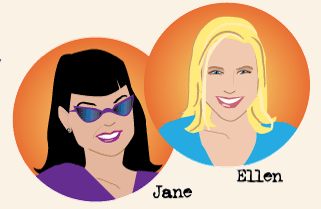 “Ellen” was looking for a way to help others and provide the advice that she never received but, in hindsight, so desperately needed.

“Jane” needed a venue to vent her own frustrations and, eventually, turn a negative into a positive.

The two distant relatives grew up in Alexandria and essentially re-found each other this past spring amidst a difficult point in both of their lives: Mid-divorce for Jane and post-divorce for Ellen. They soon settled on a solution and went about developing a website for people in situations similar to their own.

The result of the collaboration was LousySpouse.com, a Wikipedia-like advice and information website which, though still a work in progress, is already having a positive impact on themselves and others.

“The title is kind of funny and a little bit harsh, but the real intent is healing and moving on and providing focus and clarity,” Ellen said. “Those are all things that I don’t necessarily think I had because I was discovering it as I went along.”

After hashing out their project, Jane and Ellen their nomes de plume on the site to avoid unforeseen future repercussions turned to their friend Vanessa, a web designer based in the Atlanta area who they knew could help get their idea off of the ground.

“It’s a tough thing to try to tackle relationships on a website,” said Vanessa, who is still married. “They’re not professional therapists, they’re not giving professional advice, they’re just giving their message of ‘Get through this, you can do it, we’re here for you.'”

The product has since become something of a cross between a blog and Wikipedia, the free online encyclopedia that is both user-generated and audited. Visitors can find open diary entries, tools to help keep things in perspective and a forum to commiserate with others.

The forum’s anonymous nature allows contributors to “vent their own anger without getting themselves into trouble,” Jane said, adding that she, Ellen and Vanessa continue to come up with new wrinkles and information to bolster the site.

“It’s definitely put together more like a blog, but we want to have a lot of information there so we’ve got to pack it in as much as we can and still be very personal,” Vanessa said. “When I was designing it, I wanted it to be a unisex thing for men and women because this happens to everybody.”

Tuesday night in Georgetown, the founders held a launch party for friends and some area residents who have already benefited from LousySpouse.com.

Spreading by word of mouth and shot-in-the-dark Google queries, the site has gotten over 1,000 hits since launching at the end of July and already had an impact on those seeking some sort of solace or advice.

“The blogs are very helpful, just knowing that there are other people out there who are going through similar things and saying what they went through, how they dealt with it, how they’re getting through it because my process is still ongoing,” said one party-goer from the District also in the middle of her own divorce.

The woman, who spoke on the condition of anonymity to keep with the site’s general atmosphere, said that she’d “never seen anything like Lousy Spouse” and has already told her friends with spousal issues.

So far, the bulk of the contributions and interaction on the website has come from women, Jane said, but men have also sent emails and commented on their “lousy” situations.

“Lousy goes both ways, for sure, because I think we all have the same challenges,” Ellen said.

After a costly and confusing divorce, Ellen is glad to provide a service that was never really available for her and would have been precious.

“If I could have scoped the problem, framed it and known what I was up against,” handling her divorce would have gone much differently, Ellen said. “But when you’re caught off guard, shocked it was a knee-jerk reaction for me and I couldn’t find the information that I needed.”

In Ellen’s experience, handling her divorce with two different “reputable” Alexandria lawyers, she came away with tens of thousands of dollars in bills to pay and the feeling that “the people you rely on don’t necessarily have your best interests in mind,” she said.

“I felt very preyed upon,” she added.

Through the founders experience and the input of others, the site tries to offer guidance on what steps to take with a divorce and some of the options that exist, both legally and emotionally.

“Divorce is like a death in the family and a lot of people don’t know what to say,” Jane said. “People think it’s very awkward. It’s a scary process.”

Jane said that when the prospect of divorce became a reality, both of the founders’ initial reaction was to go to the internet for information. They built the website, in part, for people like themselves because they were unable to find helpful, free resources.

“I’m hoping it becomes a resource and, frankly, the emails I’ve gotten to this point make my devastation almost worth it,” Ellen said. “If we could make one person feel a little less alone, a little less freakish, less overwhelmed that’s what I want to happen.”