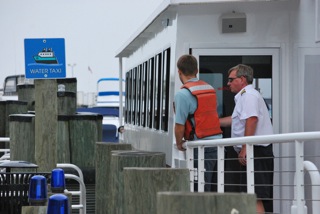 Are things really falling into place for the Washington Nationals?

A recent eight-game winning streak surely served as a welcome change from the seasons main story line losing for fans. Now it seems that another opportunity is on the way for area fans seeking a new way to get to Nationals Park.

With the opening of the stadium-side pier at Nationals Park this summer, the anticipated water taxi service from Old Town and National Harbor to the Southeast D.C. stadium could be a reality in a matter of weeks.

Now, were in final negotiations for a contract and would be providing service from National Harbor, Gaylord National and Alexandria to the stadium, said Charlotte Hall, vice president of Alexandrias Potomac Riverboat Company.

Once negotiations are completed, Hall said that the company hopes to establish night game service to Nationals Park by the end of August or first of September.
Should negotiations be completed by then, the company would have a handful of games to test the new route.

This would be a great trial for us late summer and early fall to iron out any kinks and maybe to observe something that we havent thought of before so that we can offer something on a regular basis, Hall said.

Nationals spokesperson Chartese Burnett said that she could not speak to the negotiations but that the club was excited about the opportunities that the newly finished dock provides.
Its an alternative and utilizes the waterway we have here, Burnett said. Its another great experience for fans to get to the park.

Right now, you can charter a boat service to the stadium, but the taxi service isnt set up quite yet, she said.

Hall said that the game-day service from the Old Town waterfront to the stadium would take about 45 minutes each way and cost between $20 and $25 for a roundtrip ticket. The boats in consideration for the route would allow 140 to 200 people to make the trip.

Current transportation options to Nationals home games include Metro service to the Navy Yard station a few hundred yards from the stadium, pay-to-park options near the stadium or free parking at RFK stadium with a complimentary shuttle to the ballpark.

A pre-game water taxi trip from Old Town to the stadium would take about as long as traveling from the city via Metrorail especially when foot traffic around the Metro station is taken into consideration according to Metros website.

Residents have also made clear the perks of taking the direct route from the Alexandria Waterfront to the stadium dock.

A lot of people have called out and said, Hey, we sure would like to take that boat to the stadium as opposed to dealing with traffic, Hall said. We know the business is there because over the last year and a half weve had lots of emails and phone calls saying, When are you going to have a boat going to the stadium?

According to Hall, Potomac Riverboat Company had been interested in pursuing the service ever since the Nationals stadium had been planned for the Anacostia Riverfront. Until now, though, there was no suitable place to dock.

From the Virginia side of the river, a lot is up to scheduling. Hall said that, being late in the season, the companys boats are booked solid but nighttime service to the stadium would be a possibility.