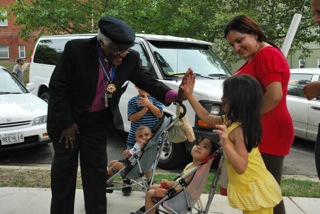 Archbishop Emeritus of South Africa Desmond Tutu is credited with catalyzing the breakdown of apartheid in South Africa through peaceful protest and resistance, but on Wednesday, when he was awarded the Presidential Medal of Freedom, he was credited with borrowing a van as humble as himself to ride to and from the ceremony at the White House.

He put it on nicely, said Tutu, referring to President Barack Obama adorning on him the Medal of Freedom that was nonetheless falling unsecured from around his neck.

Community Lodgings, a local nonprofit that provides transitional housing for low-income and homeless individuals, owns the van that Tutu and his daughter Reverend Mpho Tutu borrowed for the day. Mpho was once a clergy resident at Christ Church in Alexandria, which received a call asking to borrow a van for Tutus visit to the White House. But Christ Church sold the van to Community Lodgings, which was happy to oblige the Most Reverend Tutu and his daughter.

We were more than happy to do it, said Bonnie Baxley, Executive Director of Community Lodgings.
Its a rare occurrence.

Tutu emerged from the van at Community Lodgings Learning Center in Arlandria to a group of about 25 onlookers kids and staff from the center and residents from around the neighborhood eager to shake the hand or grab a picture with the jovial and larger than life world figure.

Hello! Hello! Hola! Tutu said as he greeted the low-key crowd applauding him, seemingly in awe. He seemed to be magnetized toward the children, especially a mother walking by with two young girls and a boy whose hands he shook, once letting loose a high-five.

Whether the shy, young kids knew the particulars of Tutus values and the work he did around the world to earn him a Nobel Peace Prize in 1984, they seemed to understand by his presence that his work had taken him far beyond the northeast corner of the city where they met him. But his affection toward them did not seem to totally betray his legendary renown.

Tutu was in town to receive the Medal of Freedom, the highest civilian award in the United States, but for about 15 minutes he was in town just to say, Hello.