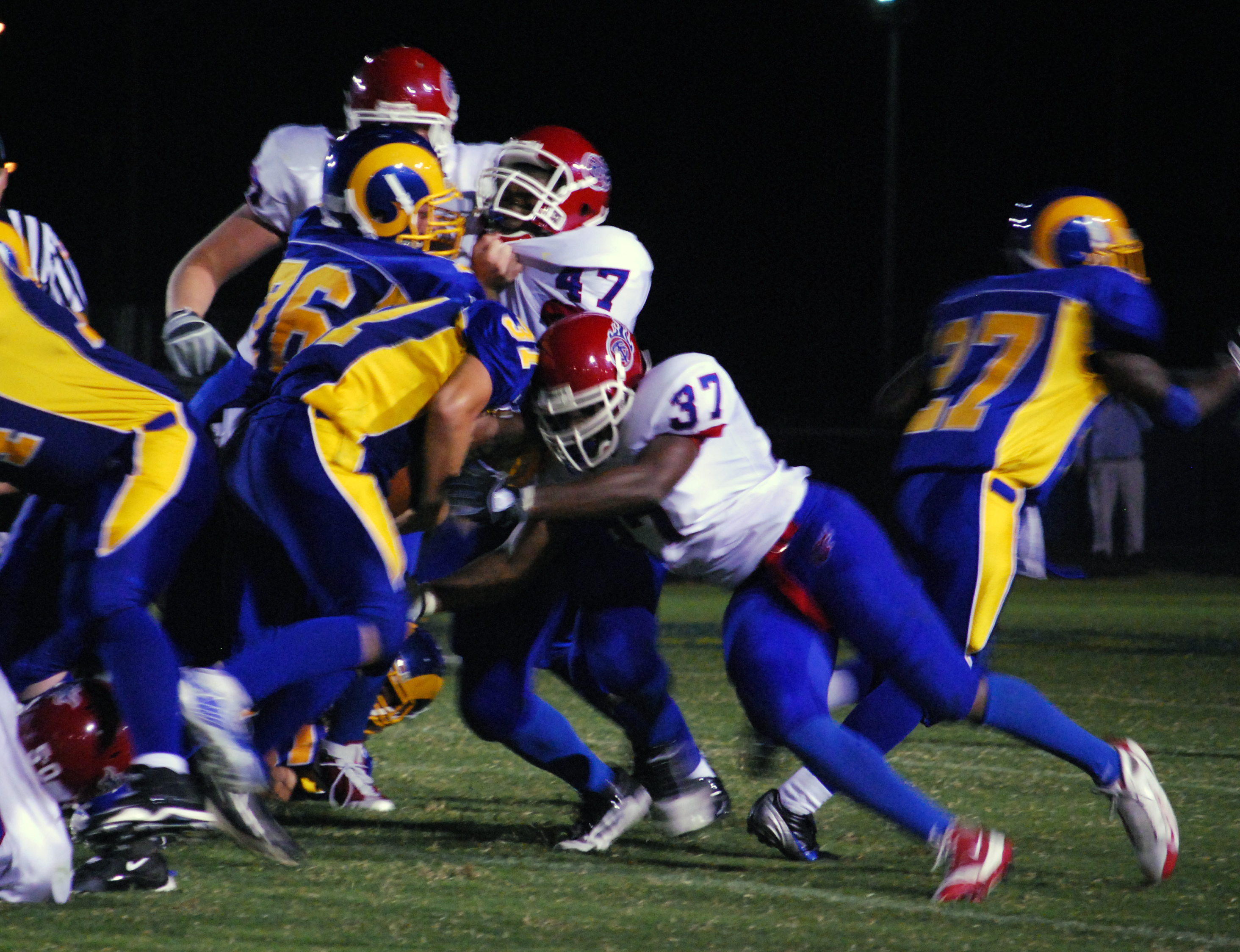 Just 23 seconds into Thursday night’s game at Robinson, T.C. Williams was kicking off with a 7-0 lead after scoring on its first play from scrimmage.

When the Titans proceeded to score the next time they touched the ball this time returning a kickoff 90 yards for another six points all signs pointed to their arrival on the scene as the possible surprise package of the 2009 season.

By game’s end, however, the glitter of that surprise and the Titans’ halftime lead had faded. Worn down by the Rams’ dominating running game and resilient defense, as well as a string of their own untimely miscues, the Titans lost their season opener 36-23 at Coffey Field.

Senior running back Cortez Taylor starred as the architect of the Titans electric start. On T.C.’s very first play, Taylor took the delayed handoff toward the right sideline, stutter-stepping briefly before turning the corner and outrunning the entire Robinson defense on his way to the end zone.

The Rams countered Taylor’s 60-yard touchdown run by grinding out a 14-play, 80-yard drive of their own that took more than six minutes off of the clock before junior running back Jared Velasquez scored the first of his four touchdowns from the T.C. 1-yard line.

On the ensuing kickoff, Taylor made quick work of the Rams once again, this time taking the ball up the left sideline 90 yards for the Titans’ second score.

T.C. kicker Manuel Benites tacked on the extra point to make it a 14-7 game with more than five minutes left in the first quarter. Barely six minutes into the season, Taylor’s speed and the Titans’ quick start were something of a surprise for Robinson coach Mark Bendorf.

“First of all, that kid [Taylor] is pretty fast,” Bendorf said. “We told [the defense] to adjust their pursuit angles, we were too flat on our pursuit angles.”

Heeding their coach’s words, the Rams refused to be fazed by the T.C. speedsters, stopping them on three consecutive possessions before scoring on another clock-eating drive.

With handoff after handoff out of the wishbone offense going to running backs Connor Riley (18 carries, 88 yards, 1 TD) and Velasquez (30 carries, 137 yards, 4 TDs), Riley scored from seven yards out to help tie the game 14-14 with 5:18 to play in the second quarter.

T.C. scored on another big play a 53-yard Robert Carter touchdown run and Benites added a 33-yard field goal to head into halftime leading 23-14 but those were the last points the quick-start Titans would record on the night.

Velasquez and the Rams controlled the second half, grinding out yards on the ground and picking up yards in the air when they called upon junior quarterback Mike LoPresti (5-10, 128 yards), but it was the defense, holding the visitors scoreless in the last two quarters, that stole the show from the Titans.

Robinson ended up scoring 22 second-half points all Velasquez touchdowns and extra point attempts to close out the Jekyll and Hyde Titans and the 36-23 win.

“We have got speed so we can get outside on people, but once they figure that out and start making adjustments, we’ve got to try to run inside,” said T.C. head coach Dennis Randolph. “Cortez is a great player, he’s got great speed, but everybody else has to be able to execute and do their job.”

“You’ve got to be able to throw the ball a little bit when you run the spread offense and we couldn’t throw it at all,” Randolph said. The Titans connected on just two of 15 passes for 28 yards and lost starting quarterback John Bray to injury in the third quarter, their second injured starting QB in as many weeks.

Taylor finished with only 43 yards rushing but, featuring as quarterback on several plays, particularly after Bray’s injury, took on negative yardage through sacks and fumbles in the backfield.

“We showed we could play with them but didn’t come out and do anything in the second half,” Randolph said. “We’ve got to correct our mistakes and we’ve got to be able to throw the ball in this offense” if we want to do better next week against Mount Vernon.