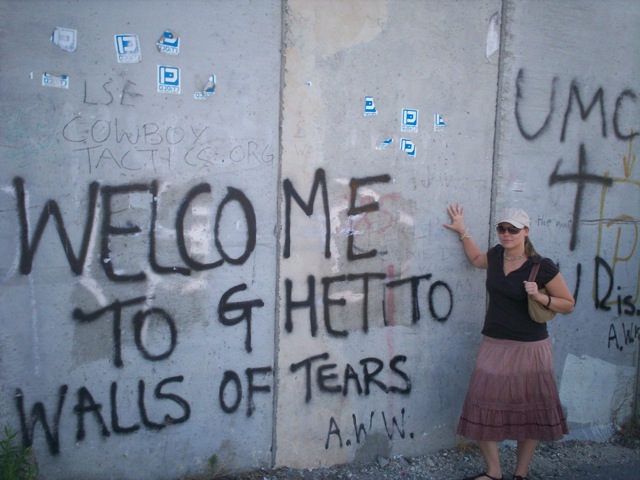 One of grad student Jen Laudas first classes at American University, a course in conflict management, paired her with a Lebanese student of Palestinian descent to examine the long-going territorial conflict between Israelis and Palestinians that throughout history has been mired and fractured in land disputes with nationalistic, religious and political overtones.

Laudas partner shared with her a unique Palestinian perspective on the conflict to which she had been inherently tied since birth. The very next semester, Luada was assigned to work on the same subject with a Jewish American man with strong ties to Israel. His perspective, too, was unique and at odds with her former partner who sympathized with Palestinians.

And in seeing the conflict from two completely different perspectives, I was like, What the heck? said Lauda, an Alexandria resident. How can two different people have two different understandings of the very same thing?

Enrolled in the International Peace and Conflict Resolution graduate program at American, Lauda, 30, knew she wanted to take part in resolving discord among individuals and groups. But her dual experiences seemed to whittle down her interest to the Israeli-Palestinian conflict, which she believes is misperceived by most Americans.

How does she know? After using her classes to examine the quarrel from an array of angles economic, military, government, communications Lauda was still missing an aspect necessary to gain a more complete understanding of a conflict with exceptionally fleeting clarity for many, especially the average American. She needed a hands-on account.

Lauda paid $2,200 out of her own pocket and flew to Israel and Palestine as part of a 23-person delegation from the Interfaith Peace-Builders, an organization urging education of the conflict by speaking with those immersed in it. She and her delegation met with 15 Palestinian groups, 14 Israeli Jewish groups and three Israeli-Palestinian groups among others, often staying overnight in affected villages.

Now I have the emotional connection to [the conflict], Lauda said a couple of weeks after returning from the Middle East. Because I walked through a checkpoint and I felt the humiliation of having to show my ID to get from point A to point B, she added, describing the everyday practice of Israeli soldiers boarding buses with guns at checkpoints throughout the region.

Lauda and her delegation experienced harassment on more than one occasion. She was spat on while protesting with a Jewish Israeli womens group against the Israeli governments support of settlements in Palestinian territory, and her colleague was detained for six-and-a-half hours at the airport because his last name matched a familys in Palestinian Gaza.

Lauda is personally against what she witnessed: Continued Israeli occupation of territory allotted to the Palestinians during the Oslo Accords, billboards advertising and attracting future developments and signs of permanent Israeli settlements to come, like a brand new police station surrounded by what is now barren earth. Her experience tells her it will soon be filled with settlements.

And she equally opposes, codified by her conversations with Israelis fearful of rocket attacks and attacks from individual Palestinians acting in that vein, the violent tactics of Hamas as a government that many believe represent all Palestinians. But as Lauda experienced, it is not as polarized as is commonly believed.

She also experienced why there is no truth to the phrase post-traumatic stress syndrome for many Israelis and Palestinians. For both groups, days are saturated with the constant prospect of rocket attacks from the Hamas government into Israeli homes, for instance, or oppression by the Israeli government against the less centralized Palestinians in Gaza and the West Bank, Palestinian-held territory where many Israelis set up permanent settlements.

There are walls all around Palestinian villages and there are checkpoints to get from any point to any point, Lauda said. You cant get from Bethlehem a 30 minute drive from Jerusalem if youre a Palestinian. The settlements are built all around the villages, all around Bethlehem. So [Palestinians] just want freedom and once they have freedom then they can fight for peace.

The output of such a volatile society was palpable and sometimes uncanny for Lauda. In one Israeli town she visited, residents transformed rocket remnants that once targeted their homes into an extravagant menorah, a sort of public art standing upright outside of their kibbutz.

They do it to show people that this is a part of their daily life, Lauda said. This is real fear, real life.

Likewise, the delegate took a liking to a young Palestinian girl while visiting her village. The two entertained one another with games like Ring Around the Rosie, just as she would with her daughter at home in America.

She was a very beautiful little girl, Lauda said, pointing to a photo of her smiling on a ground of debris. She reminded me of my own child except that shes playing with an empty tear gas canister that the Israeli soldiers fired there.

With a more centralized government, a conscripted military and more resources in general, Lauda said the Israeli governments dominance in the region was so noticeable that Palestinians dont really see peace as possible right now because the occupation is strangling them so much. She got the impression from many Palestinians that a solution to the conflict as a whole is not even being discussed among them as much as ending what they see as an occupation, because many feel that they have no bargaining chips.

The Israelis with which Laudas delegation met were not mainstream groups. Some were blatant anti-government organizations with members totally disassociating themselves with Israels administration and others were more moderate, like the Israelis living near Gaza Strip where Hamas, classified by the United States as a terror organization, sends rockets at their Israeli neighbors.

Ironically it is here, closest to some of the violence, where Lauda felt there was a strong connection between Palestinians and Israelis.

These people want to know their neighbors, Lauda said of the Israeli village a mile from Gaza. They want to help the people in Gaza. They acknowledge that Hamas is violent and is sending rockets to them.

They worry about their children on a daily basis, about sending their kids outside to play however, they know and acknowledge that its a war between their government and Hamas, and so do many Palestinians.

She likened the relationships she witnessed between Israelis, Palestinians and their governments the will of the population versus the will of the government to the discord between many Americans and the U.S. government concerning the War in Iraq. Despite substantial antiwar sentiments domestically, international perceptions of Americans altered as the war continued, though supporting Americans in the military has not wavered.

Likewise, when Americans think of an Israeli or a Palestinian, certain ideas arise about what they represent. A picture Lauda took of a smiling Palestinian boy proudly wearing a Barack Obama T-shirt probably is not one of them, though it is reality.

Laudas groundwork in the Middle East allowed her to see the nuances that the international community cannot and that even some Israelis cannot.

A visit to the conflict that Lauda had studied from abroad so thoroughl
y gave her a truer perspective than a classroom ever could, though not necessarily a cheerful one.

The biggest shock was that over there I had a community of 23 people and then I came back and it was just me, Lauda said. And it was overwhelming because I witnessed and experienced so much and I felt an obligation to do something, but I thought, Oh my God, what can I do as just one individual to make a difference?

She has already gone to extensive lengths to understand a complex issue from as many sides as possible; Laudas new challenge is reaching out to people here, informing them that what is often seen as a polarizing issue between two groups is actually painted with shades of gray, as seen through her eyes.