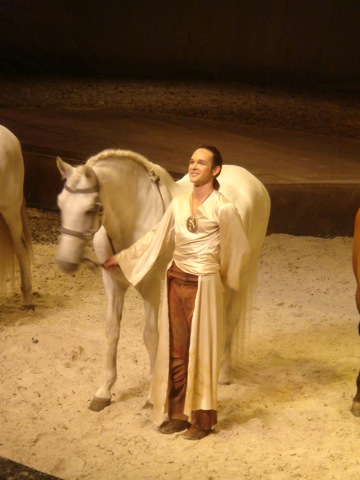 James Buchanan has no recollection of the first time he was on a horse.

Im told I was about 2 when I first rode a horse at my grandparents farm, the Alexandria native said after a performance of Cavalia, the lavish equestrian odyssey now performing in Pentagon City.

Its always just been a way of life for me.

Buchanan expected to go to college and get a job like everybody else and keep this as a hobby, but then the 24-year-old got a glimpse of Cavalia and knew this is what he wanted to do.

I saw the show for the first time back in 2004 in Seattle, Buchanan said, still catching his breath from his adrenaline-inducing performance. I went backstage and asked about a job and was given a chance to work in the stables for a year.

He left for two years to work on his trick riding skills and has been back since January of 2007 as a featured rider.

Born and raised in Alexandria, Buchanan began taking lessons at the age of 8 and was coached by Tim Majewski, the owner of Giles Run and Tamarack Stables in Lorton. He lived here until he was 17, when he landed a role as a rider in Dolly Partons Dixie Stampede production.

It feels awesome to be back home to be with Cavalia in a city that I know, Buchanan said. Ive already been out to dinner in Old Town and am looking forward to visiting the stables in Lorton where I grew up riding.

The brainchild of Cirque du Soleil pioneer Norman Latourelle, Cavalia incorporates acrobatics, aerialists, dancers, musicians and riders into a multimedia extravaganza that is showcased on a 160-feet wide stage.  The show features some 60 horses representing 13 different breeds along with 40 artists and musicians from around the world.

I ride six different horses in the show, Buchanan explained. One particular horse for each act.
Trick riding is his specialty, one he slowly learned over time as he built up a resume of skills.
I enjoy the vaulting, where we go from side to side over the horse thats an adrenaline rush, Buchanan said. Theres another trick I do under the neck I go from one side to the other under the neck while they are running. Thats a fun one.

Buchanan has just started Roman riding in the show, where he stands atop two horses one foot on each as the horses run full speed across the stage. He then inverts himself into a handstand position with his head at the horses shoulders and his feet straight up in the air.

I still need to get 100 percent comfortable with that, he said.

But most difficult for the experienced rider has been learning to work with an aerialist.
Its always been just me and a horse before, Buchanan said.  Now there is a third factor involved and that takes getting used to.

Buchanan has been fortunate in that he has never had a serious mishap.

Ive come off once or twice, but live animals are not 100 percent predictable, he explained. Sometimes they get spooked. You never know.

Between shows, Buchanan and the rest of the cast get some time off as the tents and horses are moved to the next city.

But if new horses are coming in, some of us stay and work and train them if necessary, he added.
For now, Buchanan is content to live on the road and is keeping his belongings in storage while he tours with the show.

I dont have an apartment of my own anymore, Buchanan said as he headed off to check on his horses. As long as I keep progressing as long as Im still learning Ill stick around. Home for me is wherever where Cavalia is.

Cavalia performances run through September 27 in Pentagon City under the Big White Top at South Fern Street and Army Navy Drive. For tickets or more information, call 1-866-999-8111 or visit www.Cavalia.net.