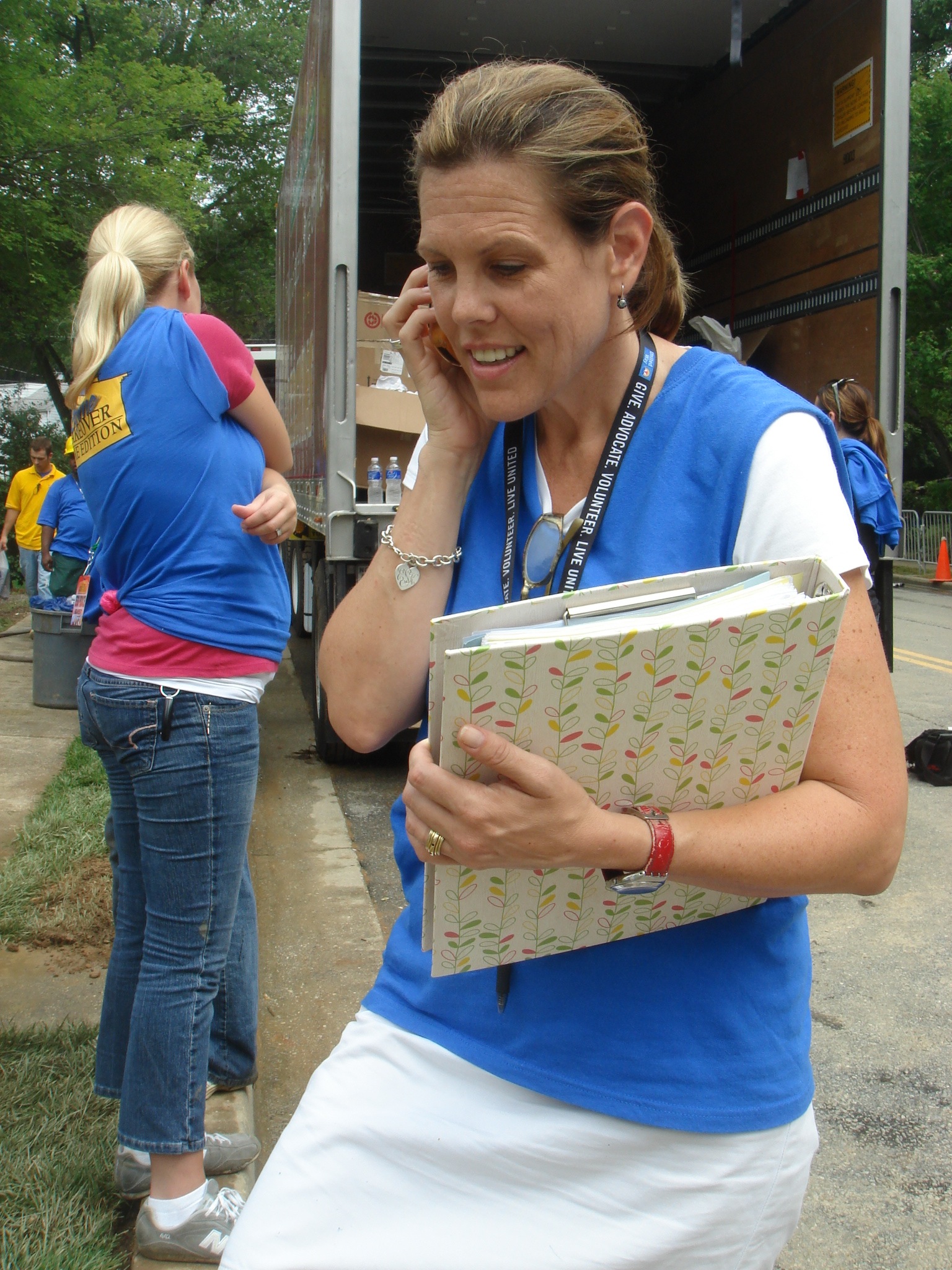 Jenny Smith and Mike Baker aren’t letting their 15 minutes of fame go to their heads. It’s back to work as usual for the two Alexandria business owners who teamed up to tackle the largest project in the history of the popular reality show Extreme Makeover: Home Edition, which wrapped up filming in the area last week.

“It was an incredible challenge but also a labor of love,” said Smith, president of Smith-Fairfield, Inc., a communications and event management firm in Old Town. “I certainly never thought that volunteering to help out a friend’s charity a year ago would lead to this.”

Smith is referring to the Fishing School, a nonprofit youth and family support organization located in the Deanwood section of Northeast D.C. that was operating out of what was once a former crack house.

“When I first saw the building, it was clear that there were far more children in need than the facility could serve,” Smith said. “I took a chance and called ABC and pitched the idea of them doing something for the Fishing School. Little did I know it would turn out like this.”

IRS regulations mandate that the popular show do renovations for families that own their own homes, and none of the Fishing School families qualified.

With the theme for this year’s show being “Get on the bus!” a nod to the Obama administration’s focus on volunteering ABC located the family of Nikema and Tamara Tripp of Hyattsville, Md., who operate what they refer to as a “bus ministry.” Thus, the double build idea the largest project in the history of the show was set in motion.

“I think I got the call from Jenny back in late July,” said Mike Baker, vice president of Burch Builders Group, a custom residential home builder based in Alexandria. “We had about a month to get plans in place and secure all the donations.”

Smith remembers her own fateful call as well.

“ABC called and said ‘Let’s do it. We’re going to be doing a two-hour special on this project. Now you’re in charge,'” Smith recalled. “I had no idea that would mean in charge of pretty much everything.”

Smith went on to explain that while ABC pays for the talent and their own film crew, it falls upon the community to bring in the people, resources and products to bring the project to fruition.

“My first call was to Mike and Tim [Burch],” Smith said. “They immediately stepped up and said ‘absolutely.'”

Thus began a race to find donors of everything from lumber to windows to hot water heaters and solar panels.

“There are a couple of national advertisers, like Sears for the appliances,” noted Baker. “But more than 90 percent of everything that goes into these projects is donated locally from the security systems down to the light fixtures and paint.”

Smith’s next call was to Bill Hanbury, president and CEO of the United Way National Capital Area, to ask for support in rallying the volunteers.

“We couldn’t have done it without United Way’s help,” said Baker, who noted that more than 4,500 volunteers assisted on the two projects. “It really was incredible to see these guys and gals accountants and lawyers and such on their knees in the dirt and mud doing whatever they could to get the job done.”

That many volunteers working around the clock needed to be fed, and it fell to Smith and the United Way to secure more than 10,000 donated meals for the week.

Betty Saylor, an Alexandria resident and owner of Beehive Productions, was brought on board by United Way to coordinate “the volunteers, the meals and any other emergency.”

“Everyone from United Way to Smith-Fairfield starting calling any contact anywhere to get meals donated for the volunteers,” Saylor said as the project neared completion. “People were very generous we did not get a lot of ‘no’s’.”

Saylor was especially impressed with the “instant teamwork” that she experienced during the project.

“It was an honor to be a part of this,” Saylor said. “It was amazing to see what you can accomplish when you get that many people together.”

Baker, who slept in an RV in a parking lot a few blocks from the Fishing School, had two teams working alternating 12-hour shifts.

“We tried to do as much work at night as we could because Hollywood wasn’t around then,” Baker said. “Once the film crew and cast were around, it definitely slowed things down.”

But Baker had nothing but praise for talent on the show.

“Working that hard for that many hours at a time, there were bound to be down times,” Baker said. “Anytime my guys needed an extra boost, ABC would round up the stars especially Tracy to cheer the guys up and pick up the pace.”

An unforeseen soil problem at the Tripp site set in motion a domino effect of delays that nearly kept the show from missing their deadline something that has happened only once in the history of the show.

But Baker put those delays to good use. He and his team combed the streets looking for ways that they could help improve or beautify the neighborhood.

“One house had a tree fall on it during a storm a few years back, and the porch had collapsed during the week we were on site,” Baker said.  “We made sure to fix that and did everything we could to leave the neighborhood better than when we came.”

The efforts of Smith and Baker did not go unnoticed as D.C. Mayor Adrian Fenty and three Obama administration Cabinet secretaries Energy Secretary Steven Chu, Education Secretary Arne Duncan and
Secretary of Labor Hilda Solis stopped by to check out the project.

Actor and producer Tyler Perry was so moved by the story of Lewis’s mission that he decided to come to D.C. to volunteer on the project. Perry also donated new buses to the Tripp family’s ministry and has started a foundation to support the Fishing School.

At the end of the week in a mere 106 hours Baker and the Burch team had turned a 2,100-square-foot former crack house into a 6,700-square-foot community center.

As expected, there were tears all around when show host Ty Pennington uttered his trademark “Move that bus!” brining a race against time to an end for Smith and Baker.

“I would absolutely do it again,” they both said without hesitation.

But as small business owners, they both also noted that there was no time to bask in their accomplishment.

“No resting on laurels here,” Baker said. “I have too many backed up clients I need to take care of.”

However, Smith was quick to add, “I have met the most fabulous people I have ever met in my life doing this project. To see so many people give so much to help others is amazing and I have made friends that will last me a lifetime.”