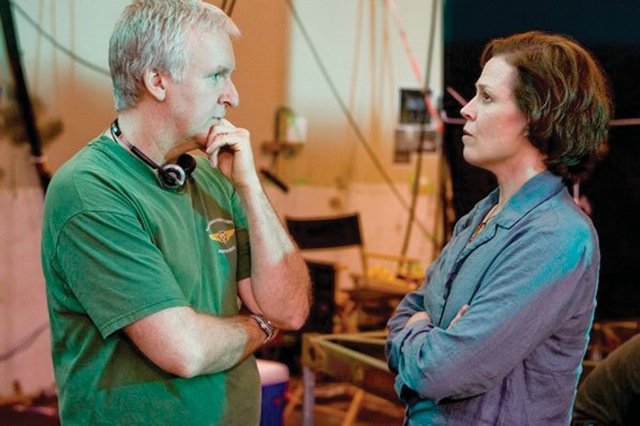 Im hoping that James Camerons Avatar, opening in December, will be a terrific film. But I was underwhelmed by about 15 minutes of preview footage I saw in 3-D on Friday night. The same footage has been widely shown around the country.

This is a film that Cameron has had in preparation in one form or another ever since he was filming Titanic in 1997. That became the top-grossing movie of all time, raising incredible hopes for Avatar, reflected in its reputed $200 million budget. Cameron revealed his intention to use motion-capture animation to create several characters who would be entirely computer-generated, and others about whom you could never be quite sure.

The preview begins, however, with actual human Marines being briefed for a tour of duty on an alien moon named Pandora, which is inhabited by humanoid beings named the Navi and many other creatures, says a Marine sergeant, who want to rip them to pieces and eat your eyeballs like jujubes. Humans cannot live on Pandora, but the paralyzed ex-Marine hero named Sully is given an avatar a body that seems to be a native Navi 9 feet tall, skinny, blue and with a tail.

In this body, Sully operates on Pandora, bonds with the Navi, and does battle with the savage creatures. Why he does this is not explained; the Navi apparently coexist peacefully with these denizens. Armed at first with a machine gun and later only with spears and knives, Sully faces monsters much taller, faster and stronger than he is. But he dodges them, outruns them, and in one case actually lassos a giant flying reptile and tames it to act as his steed. This may add up to a terrific story in the complete film. I hope so.

There is also footage of Marine helicopter gunships going into battle on Pandora. A trailer for the film informs us there are 70 million times 70 million stars in the universe, and suggests one of these may shed its light on a place with life. Since Pandora is the home of life, it seems a little odd to go to all the trouble of finding it and then going to war with its life forms. What is the human objective? Stamp out all other life in the universe?

Theres a brief shot of Sullys avatar and Neytiri, a female Navi, about to kiss. The biology, physiology and mechanics of sex between a Navi and an avatar controlled by a human mind is intriguing. Was it as good for you as I had the illusion that it was for me?

After writing a blog entry months ago that was dubious about the future of 3-D, I was assured by countless pre-fans of Avatar that it would change the entire outlook for that technology. This is not the time to revisit the subject of 3-D. I will only react to what I actually saw.

3-D on the giant (original) IMAX screen, with its oversize and comfortable glasses, remains the best way to see 3-D. Thats especially true because the IMAX process allows adequate light levels to be projected onto the screen, and Ive never seen 3-D in a regular theater that wasnt dimmed.

I sat through the preview footage twice, the first time at the end of the back row. There was a subtle but noticeable lack of perfect registration between the dimensions. The second time I was smack dab in the center. This was the exact same seat from which I saw the IMAX 3-D presentations of Beowulf and The Polar Express, the best two uses of the process I have ever seen. From that seat, the registration was perfect, and the 3-D illusion worked.

Cameron does, however, make the mistake common in recent action pictures, of cutting the action so quickly its placement in time and space is unclear. Much of the footage of Sully fighting the creatures is so close to the front of the picture and so rapidly cut that we never visually understand quite where Sully is in relationship to the position of the monster seemingly prepared to overwhelm him.

The flying reptiles present another challenge. How do you depict creatures that large (say, 25 feet long) that flap their wings quickly enough to fly? Cameron doesnt. They flap their wings far too slowly, and not particularly believably or smoothly. The effect reminded me of the flying horses in Ray Harryhausens Clash of the Titans (1981).

One other detail. Youd expect every cut in this brief preview footage to be perfect. But when Sully almost falls into a vast chasm and grabs a tree root to save himself, he uses his strong arms to drag himself back up to the ledge. This action is completed in a shot from a higher POV that doesnt match and amounts to a continuity error.

The complete film remains to be seen. Both groups I saw the preview with applauded. Cameron is reportedly still in post-production. He has made films I admired enormously (Aliens, Terminator 2, The Abyss, Titanic). I hope he does it again.